Wonder Where That Fat Cat Learned to Eat?

Published: July 18, 2006
There’s certainly more truth than poetry in the expression “like father, like son.” And when it comes to excess weight and obesity in dogs and cats, it’s often “like owner, like pet.” 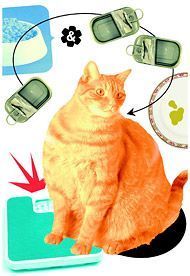