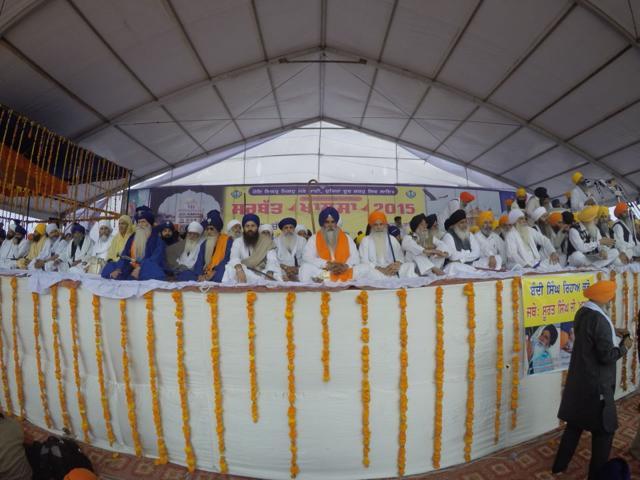 A congregation organised by radical Sikh organisations here on Tuesday ‘removed’ five Sikh head priests and appointed Jagtar Singh Hawara, a convict in the Beant Singh assassination case, as jathedar of Akal Takht, the supreme temporal seat of the Sikhs.

Hawara, one-time militant of Babbar Khalsa outfit, is currently undergoing life-sentence at the Chandigarh jail. He was convicted for the murder of then Punjab chief minister Beant Singh in an human bomb attack on August 31, 1996.

The congregation, called Sarbat Khalsa by radicals, accused the incumbent Sikh head priests, appointed by Shiromani Gurdwara Parbandhak Committee, of not keeping up the dignity and traditions of Sikh institutions .

Its also withdrew the titles of Fakre-e-Qaum and Panth Rattan given to Punjab CM Parkash Singh Badal.

Amidst heavy security arrangements, the controversial Sarbat Khalsa (congregation of Sikhs) began with the bhog ceremony of Akhand Path at Chabba village on the outskirts of Amritsar on Tuesday.

Thousands of people attended the event. Many Sikh leaders also reached the spot.

Punjab BSP president Avtar Singh Karimpuri also attended the event and said that his party stands with the Sikhs community.

Addressing the congregation, various Sikh leaders blamed the Parkash Singh Badal-led government for the sacrilege incidents across the state. They also urged people to support the decision taken by the Khalsa Panth.

Meanwhile, Security have been beefed up in holy city to prevent any law and order situation in thw wake of the Sarbat Khalsa being organised by ‘Panthic’ leaders, including hardliners. 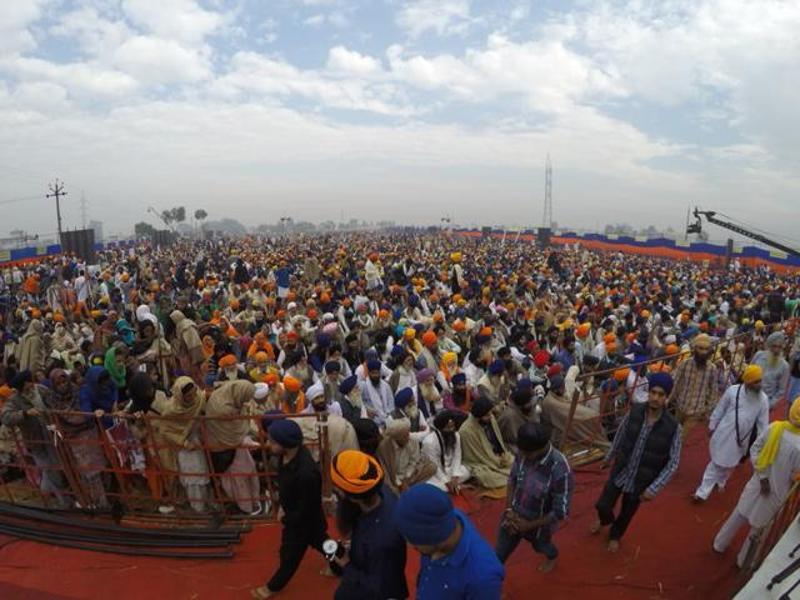 Over 5,000 security personnel have been deployed across the city. Paramilitary forces, including the Indo-Tibetan Border Police (ITBP), Central Reserve Police Force, Border Security Force (BSF), and the Rapid Action Force, are keeping tight vigil at all important spots.

Special security arrangements have been made near the venue on the Amritsar-Tarn Taran road.

Tight vigil is being kept in areas near the Golden Temple. Surveillance cameras have been put in place at Hall Gate, Jallianwala Bagh and Katra Sher Singh.

All roads leading to the venue are being heavily guarded. Strict instructions have been given to security forces to not allow any big gatherings across the city during and after the Sarbat Khalsa. Vehicles are being thoroughly searched at special check points set up across the city.

Driving through towns and villages of Punjab, a common phrase people use for the Punjab government is Badal raj (monarchy). The reference is to the family holding a majority of ministries, party presidency and chief Parkash Singh Badal’s daughter-in-law Harsimrat being the only union minister from the SAD in Delhi.

This is something that has irked Akali stalwarts too and they privately admit both “power and its spoils” have been concentrated in one family. “They are running the government like a family business. There were no consultations with senior leaders before grant of pardon to the dera head. It is they who should face the music,” said a minister, requesting anonymity.

Even senior party MP Ranjit Singh Brahmpura claims they got to know about the pardon and its withdrawal from newspapers. “The SGPC and Akal Takht are independent of the Akali Dal. We had no inkling of the dera pardon. It did not take place at the CM’s behest,” Brahmpura claims. Unlike him, SAD MP Naresh Gujral questioned the timing of the dera pardon when Punjab was in “throes of a full-blown agrarian crisis”.

Standing rather submissively near the long lines of Sikh protesters holding black flags on November 3 in Ludhiana, anger is simmering among even among Punjab cops who complain they have been made the “sacrificial lamb” by the government. Worse, there are videos being circulated on Whatsapp groups by the names of ‘Tashan yaara de’ and ‘Yaara da tikhana’ to show cops being “brutally attacked” by protesters on the day of the firing. One of the videos shows an old turbaned Sikh policeman being beaten up and another of police uniforms hung on electric poles after being torn. “They made cops face public ire. Our men and women were beaten up and their uniforms were torn. Why is the government silent on how the police was targeted that day? The Sikhs among us are angry at the incidents of sacrilege and the force as a whole is demoralised,” a Sikh policeman said.

Cops too, like some radical groups, want the CBI to probe the firing incident. “They made Akali halqa in-charges our bosses and broke our chain of command. We are now being told that the poor public-police relations led to the backlash,” another cop added.

Sikh protesters sitting on the road holding black flags too have Whatsapp videos to share. One shows protesters being picked up by the police at Behbal Kalan and another shows a young baptised Sikh girl asking CM Badal and his son to stop playing “siyasat di kabbadi (political slugfest)”.

“Badal said at the Kabaddi World Cup that he does not know how to play the game but he knows how to play siyasat di kabaddi. The Sikh community has woken up. We will not let him play this kabaddi,” she tells a local TV channel. The video has been widely circulated among Sikhs in Punjab and abroad. The placards held by protesters on the day of the black flag protest explain why the Badals in particular and the Akalis in general are the target of public anger. Those held by youths sitting on the dividing road near Rampur village of Ludhiana read “False panthic government murdabad”.

Leading them was 32-year-old Jatinder Singh, who spoke broken but accented English, like many Punjab youth who had nursed dollar dreams. “We are not holding the protests on the persuasion of any religious leader but Guru Granth Sahib is showing us the way. The Akali Dal is a false Panthic party that garnered votes int he name of the Panth and is now lowering the dignity of Sikhs and their institutions,” Jatinder said.

At Bukanwala village in Moga, Kaka Singh, a landlord, is angry about the manner in which the protests of dera followers and Sikhs were dealt with. “We are not upset at the pardon to the dera head but if his followers block roads, the movie of the Baba (Ram Rahim) is released and when Sikhs protest, police open fire and kill us!”

At Panjgrain Khurd in Moga, hundreds poured out to express solidarity with brothers Jaswinder and Rupinder Singh, who were recently released after being arrested on sacrilege charges. Among them those who call themselves “moderate Sikhs”. “The SAD is following the RSS agenda of polarisation. When the farmers’ agitation was spiralling out of control, they played the dera card,” said Daya Singh from Faridkot.

Charanjit Channi from Dugri in Ludhiana claims people in Punjab have now understood the “Badal brand of politics” and can see through their game of diverting public attention by using religion.

The protest does not seem to have given the main opposition party, the Congress, an edge as many Sikhs still blame it for having targeted their community in the past. There are rumblings in support of the rookie Aam Aadmi Party. But holding sway in the village that day were Sikh preachers, youths sporting “Sikh relief volunteers” T-shirts and Punjabi news channels such as Qaumi Soch and Khalsa News.