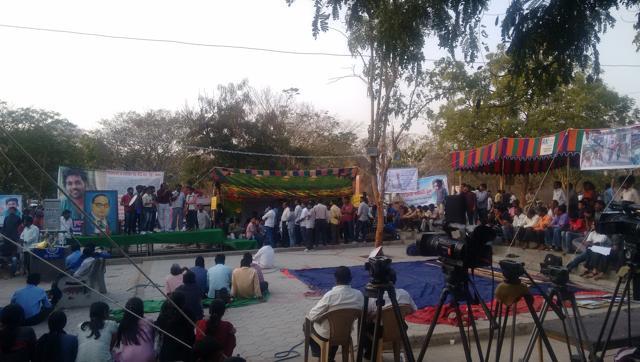 A crowd of protesting students and a granite plaque at the shopping complex on the University of Hyderabad campus kept research scholar and Dalit student-activist Rohith Vemula alive, a week after his suicide in his hostel room.
The market is significant considering the turn of events over the past week at the university with 5,200 students and 400 teachers — a central institution considered one of the best in the country for scientific studies.
The PhD student in social sciences and his friends had sat and slept at the market in protest for a few days after he was expelled from NRS hostel, which is just a shout away.
Vemula was an active member of the university’s Ambedkar Students Association and his death, according to many students, has become a symbol of resistance by the oppressed class.
The campus, usually abuzz with activity even on Sundays, wore a deserted look except at the protest site. But here too the crowd is thinning with each passing day.
Many students, especially those from nearby towns and cities, have left for home after the administrative and academic blocks were closed in the wake of the protesters’ pledge to stop all activities “till justice is done”.
What’s baffling people is that the joint action committee of protesting students has decided to continue its stir even after the Union human resource development ministry declared that a judicial commission would probe the circumstances leading to Vemula’s suicide. 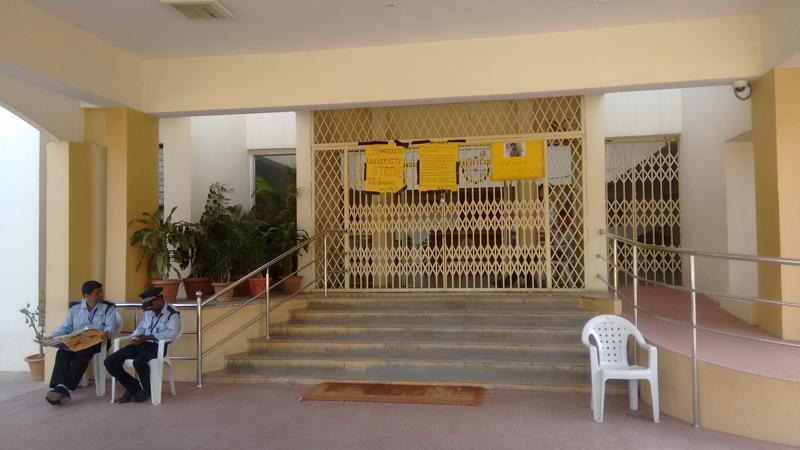 “Our business has become nil. The university has just opened after the semester break and now the suicide row has hit us hard,” the owner of a canteen near the academic buildings said.
The only place witnessing some business is the shopping complex — currently the hub of all activities at the sprawling university spread over 2,000 acres.

A truce effort by about 100 teachers on Friday failed as the students refused to budge from their demand for removal of vice-chancellor Podile Appa Rao, who went on leave on Sunday.
Vice-chancellor Rao, Union minister Bandaru Dattatreya, ABVP leader Susheel Kumar are among those named in a police report for Vemula’s suicide.
“Our effort was to engage them in a dialogue since we cannot let all students miss out on their studies and research. But we could not succeed because the protesters refused to talk and, instead, requested us to support their demand,” a senior professor said.
University authorities feared that the entire semester could be disrupted if the deadlock is not broken at the earliest. But the protesters countered that the culprits should be caught first.
You must log in or register to reply here.
Similar threads