Bangladesh Removes Quota In Govt Jobs After Massive Student Protest; All You Need To Know 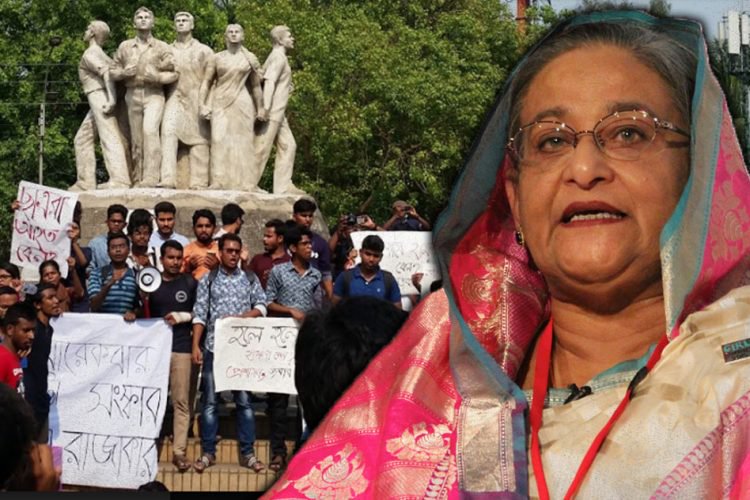 Bangladesh Prime Minister Sheikh Hasina today said that she has decided to scrap quota from government jobs after thousands of students protested across the country against a controversial policy that set aside jobs for special groups.


The PM, however, said the government could make special arrangements for jobs for the people with disabilities and the backward ethnic minority ones.

Bangladesh witnessed a student uprising on Monday, April 9, to protest against the reserved quota system for the ‘Bangladesh Civil Services Examination’ (BCS). Students of Dhaka University (DU) held protests at the ‘Teachers Students Centre’ (TSC) in Shahbagh, a busy intersection of the capital. Students from other private universities also integrated with the movement. The protest quickly escalated and unfortunately took a violent turn. The Dhaka Police fired rubber bullets and tear gas at the students protesting in the Dhaka University. At least 100 people were injured.

Two students of the Dhaka University (DU) talk about the protest that was called off today.

What is the protest for?
A student from DU who wished to remain anonymous said, “Bangladesh Civil Services Exam has 56% of its seats reserved for certain groups that includes acceptable quotas like a section for women and certain sectors for indigenous minorities.”

The student section of Bangladesh does not encroach upon the reservation of people in need. However, the DU student continues, “The problem is the 30% segment that reserves the seats for children and grandchildren of 1971 war veterans.”. According to the students, its biased because “it means 2% population compete for 56% of the seats while 98% compete for 44%.”

He continues, “This is a huge blow for middle class students trying to get a decent job as our corporate industry is only recently growing. Therefore, government jobs remain the best way for someone from a struggling class to have some social mobility.”

How did violence escalate?
April 9 to April 10: The protest started on Sunday at the Teachers Students Center in Shahbagh. Another student from Institute of Business Administration (IBA), DU in conversation with The Logical Indian said, “Police have been using tear shells and rubber bullets from Day 1 itself.”

The police has alleged that the students did not hold a peaceful protest as they torched two parked cars in the campus. The students of Dhaka University out rightly rejected this allegation stating that cars were actually burnt down by the “Chattro League” (a student political group).

The students surrounded the VC’s residence as a part of the protest without any intention to harm anything or anyone, according to the IBA student. “At this point the Chattro League and the police unanimously attacked the students with tear shells, rubber bullets, hockey sticks, machetes etc leaving at least 10 students severely injured,” he said.

April 10 to April 11 (Midnight: 12:25 AM IST): During the conversation with the two students of Dhaka University who remained unnamed for fear of being tortured by the Chattro League, the protest took another violent turn as we spoke. The IBA student said, “Girls of the Sufia Kamal hall are being beaten for joining the protest as we speak.”

“Reports are emerging that politically aligned seniors (Chattro League) are torturing juniors in the dormitories. Even the girl’s dormitories are stained with bloods of fresh violence,” he added.

At 12:45 AM IST, right after they were beaten up and assaulted, girls of Sufia Kamal started to speak up. One victim although reluctant to show her face in fear of being assaulted by the Chattro League made a statement on voice recorder. She said, “They (Chattro League) are hitting all of us. I haven’t been able to join the movement for 3 days. Every day I have been locked inside my dorm room crying. They threaten us they’ll kick us out of the dorm.” 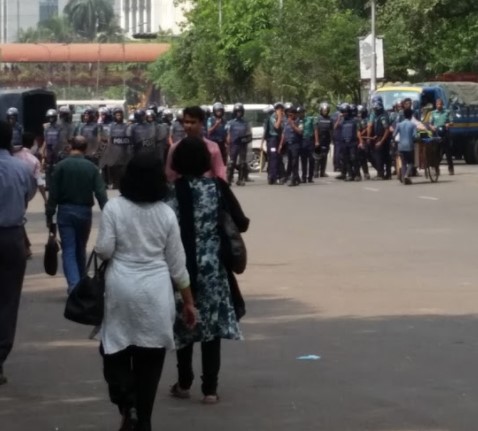 The student also said that since it is an election year, the political scenario of Bangladesh is very intense. “The opposition party BNP is trying to claim the movement for themselves simply because they haven’t been able to put together a decent movement in years,” he continued. Dusting off all political association, the student said that their protest is completely apolitical.

Staff member
India should do the same..
♛