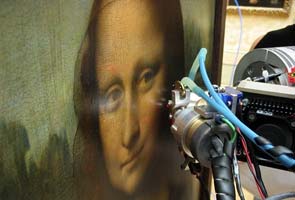 Rome: A male apprentice, longtime companion and possible lover of Leonardo da Vinci was the main influence and a model for the "Mona Lisa" painting, an Italian researcher said Wednesday.

But the researcher, Silvano Vinceti, said the portrait represents a synthesis of Leonardo's scientific, artistic and philosophical beliefs. Because the artist worked at it at various intervals for many years, he was subjected to different influences and sources of inspiration, and the canvas is full of hidden symbolic meanings.

"The 'Mona Lisa' must be read at various levels, not just as a portrait," Vinceti said.

This is one of many theories that have circulated over the decades about the identity of "Mona Lisa" and the meaning for her famously enigmatic smile. Others have said the painting was a self-portrait in disguise, or the depiction of a Florentine merchant's wife -- the latter drawing a consensus among scholars.


The apprentice Gian Giacomo Caprotti, known as Salai, worked with Leonardo for more than two decades starting in 1490. Vinceti described their relationship as "ambiguous," and most art historians agree Salai was a Leonardo lover.

Several Leonardo works, including "St. John the Baptist" and a lesser-known drawing called "Angel Incarnate," were based on Salai, Vinceti told a news conference at the Foreign Press Association. These paintings show a slender, effeminate young man with long auburn curls.

Vinceti said similarities with the "Mona Lisa's" nose and mouth are striking.

"Salai was a favorite model for Leonardo," he said. "Leonardo certainly inserted characteristics of Salai in the last version of the Mona Lisa."

It was not the first time that Salai's name had been associated with the "Mona Lisa," though some scholars expressed skepticism.

Vinceti said other influences may have affected Leonardo. He does not rule out that Lisa Gherardini, wife of Florentine merchant Francesco del Giocondo, may have provided an early inspiration.

Equally, Vinceti said further inspiration may have come from noblewoman Beatrice D'Este, who was married to Ludovico Sforza, the duke of Milan at whose court Leonardo worked in the late 15th century. Vinceti said that Leonardo often would see the woman while he was painting "The Last Supper" for the Monastery of Santa Maria delle Grazie in Milan, where she went to pray.

Typically, art historians say Leonardo started panting the "Mona Lisa" in 1503, when Leonardo was back from that Milan stay. But Vinceti has said he may have started in the late 1490s in Milan.​
You must log in or register to reply here.
Similar threads
Big Boss 5: Jackie Shroff, the next male entrant
When Nargis Fakhri auditioned for America's Next Top Model 2004
'America's Next Top Model' to Get Indian Version
I’d like to be a role model in my personal life............
Bundchen on a model hunt
Share:
Facebook Twitter Pinterest WhatsApp Link
Top