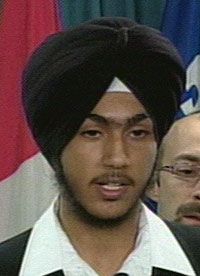 Gurbaj Singh.
Twelve-year-old Gurbaj Singh Multani had no idea that when he accidentally dropped his ceremonial dagger in his schoolyard in 2001 that the incident would touch off a dispute that would eventually wind up in the Supreme Court of Canada.

The dagger was a kirpan and Gurbaj was wearing one because he is a baptized orthodox Sikh. Orthodox Sikhs say the kirpan is not a weapon but a religious symbol which must be worn at all times. But others said, symbol or not, any kind of knife has no place in a school environment. When the school board’s governing body ruled that a kirpan violated its ban on students bringing "dangerous and forbidden objects" onto school property, the dispute headed to the courts … and ultimately to the country’s top court.

The kirpan case, as it came to be known, was to drag on for years. The questions facing the Supreme Court revolved around one central issue. Did a total ban on kirpans in school violate the religious freedom of Gurbaj Singh, as guaranteed in the Charter of Rights and Freedoms or was the ban a reasonable restriction?

Here’s how the dispute evolved:

Nov. 18, 2001:
Gurbaj Singh Multani, a 12-year-old Grade 7 student at Ste-Catherine Labouré school in Montreal, is playing with other kids in the schoolyard when his kirpan falls out of his cloth holder. He picks it up and puts it back into the holder. But the mother of another student sees it and complains to school officials that she’d seen a weapon. Later that day, the school principal asks Gurbaj to remove his kirpan but he refuses and is sent home.

Dec. 21, 2001:
Following several weeks of negotiations, the local school board says Gurbaj will be allowed to come back to school as long as certain conditions are met. The kirpan must be kept tightly sheathed with a flap sewn securely shut so the dagger could not be removed either accidentally or deliberately. Gurbaj and his parents agree to the conditions.

January 2002:
Gurbaj returns to school following the Christmas break but is sent home again because the principal says his kirpan is too loose and some parents are worried about their children’s safety. Gurbaj’s father hires a lawyer.

Feb. 12, 2002:
The Governing Board of the school board (Commission scolaire Marguerite-Bourgeoys) overrules the Dec. 21 resolution of the board and adopts the following resolution:
"The fair arrangement proposed by the Commission scolaire Marguerite-Bourgeoys on Dec. 21 2001 is unacceptable and it goes against Section 5 of our Rules and Regulations: dangerous and forbidden objects."​
March 19, 2002:
The school board holds a special public meeting to discuss the issue. The board hears from several parents who argue against allowing kirpans and from several members of the Sikh community. The commissioners then unanimously vote to reverse their earlier compromise agreement and will now back the governing board’s prohibition on the wearing of kirpans in school. They say they will allow Gurbaj to wear a symbolic kirpan as a pendant or one made of plastic or any other harmless material. Orthodox Sikhs say that is not in keeping with the tenets of the religion.

Late March 2002:
Julius Grey, a lawyer for the Singh family, files a motion with the Quebec Superior Court to force the school board to allow Gurbaj to return to school pending a court decision on the kirpan issue. The Singh family asks the court to overrule the March 19 prohibition on real kirpans.

April 16, 2002:
Quebec Superior Court Justice Claude Tellier rules Gurbaj can return to school. He heads back the next day. In the following weeks, some parents picket the school, sign petitions, and keep their children home from school. Gurbaj Singh Multani eventually transfers to a private school.

May 17, 2002:
Quebec Superior Court Justice Danielle Grenier rules that because the kirpan is an integral part of his religious beliefs, Gurbaj can wear a real one to school as long as he follows several conditions. The kirpan must be sheathed in a wooden case, wrapped in heavy fabric and worn under his clothes. The belt holding the kirpan must also be sewn into his clothing. The judge calls these conditions a reasonable accommodation of Gurbaj’s religious freedoms and the need for public safety. The school board, backed by Quebec PQ government at the time, appeals.

March 4, 2004:
The Quebec Court of Appeal overturns the judgment of the Quebec Superior Court and allows the appeal by the Marguerite-Bourgeoys school board and the Attorney General of Quebec. The Court of Appeal rules that security concerns are more important than the rights of Sikh students to wear kirpans to school. Take away the religious symbolism, the court says, and you have something with all the characteristics of a weapon. The Singh family’s lawyer, Julius Grey, asks for leave to appeal to the Supreme Court of Canada.

April 2005
The Supreme Court hears arguments in the case. Julius Grey, the lawyer for Gurbaj Singh Multani and his family, notes there has never been a case in Canada of a school assault committed with a kirpan, calling that "overwhelming empirical evidence that the kirpan is not a dangerous weapon." But school board lawyer Francois Aquin points out that no school assaults have ever been committed with kitchen knives either. "That doesn’t mean we allow students to carry kitchen knives in school," she argues.

March 2, 2006:
The Supreme Court of Canada rules 8-0 that a total ban of the kirpan in schools violates the Charter of Rights because it infringes on the Charter’s guarantees of religious freedom. But it does allow school boards to impose some restrictions on the carrying of kirpans to ensure public safety.

"Religious tolerance is a very important value of Canadian society," Justice Louise Charron writes in the unanimous decision. "A total prohibition against wearing a kirpan to school undermines the value of this religious symbol and sends students the message that some religious practices do not merit the same protection as others."

The high court says if the kirpan is sealed and hidden under clothes, there’s little chance that students could use it as a weapon. "There are many objects in schools that could be used to commit violent acts and that are much more easily obtained by students, such as scissors, pencils and baseball bats," writes Madam Justice Charron.

Gurbaj Singh Multani, now 17, says the ruling will help other orthodox Sikhs now in schools. "Now that we've won the case, kids like me won't have any problems anymore," he tells reporters.

Gurbaj, Good Hai Bai... thats what is the strength and himmat of a sikh !!!

and I must say thanks to your parents as well, which,im sure will have gone through pillar & post to get you through this one... and I must appreciate your mum & dad, whom have told u about Sikhi & its tenents..
You must log in or register to reply here.
Similar threads
Sikh arrested in US for carrying Kirpan
Kirpan is banned now, what's next?
Kirpan - pendant ?
Sikh teacher with kirpan denied entry into President functio
Know Your Rights On Kirpan Policy in US
Share:
Facebook Twitter Pinterest WhatsApp Link
Top