Haryana, Punjab among 13 most accident-prone states 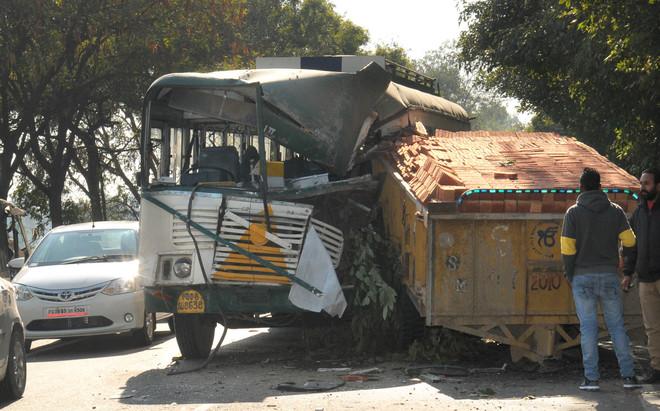 With increasing number of Indian commuters making use of roadways vehicles everyday, there has been a corresponding increase in the number of accidents and fatalities with the country losing 16 lives and witnessing 56 accidents every hour.
Fifty-three per cent of the road accident victims fell in the 15-35 year age group. Last year, Haryana and Punjab ranked among the top 13 states in terms of accidents and fatalities.
Punjab ranked second in terms of accident severity (road accident-related deaths per 100 accidents) in the country, a report of the Ministry of Road Transport said here today. Mizoram ranked at the top.
Of the 1.39 lakh persons who lost their lives in road accidents last year, 4,621 were killed in Punjab and 4,483 in Haryana. According to the report prepared by the ministry’s research wing, Punjab’s share stood at 3.3 per cent while Haryana ranked a notch below at 3.2 per cent.
In severity of road accidents Punjab’s share is a whopping 72.3 per cent while that of Uttrakhand 62.3 per cent.
Of the 4.89 lakh accidents reported in 2014, over 10,000 occurred in Haryana.
Drivers’ fault (78.8%) was the single most important factor behind road accidents in 2014, as against 78% in 2013. In this category, accidents caused and persons killed due to speed-limit violations stood at 55 and 56.2%, respectively. Accidents and deaths caused due to “intake of alcohol/drugs” accounted for 5 and 6.8%, respectively.
The report also classified million-plus cities for accidents and fatalities. Out of 50 such cities, Delhi recorded highest number of accident deaths (1,671), while Mumbai registered the highest number of road accidents (22,570). Accident severity in case of these cities was 15% in 2014, as against 15.4% in 2013. Accident severity varies from a low of 2.4% (Mumbai) to a high of 66.9% (Ludhiana). The percentage was 57 in case of Amritsar. Of the total road accidents, 28.2% occurred on national highways, 25.2% on state highways and 46.6% on other roads.
You must log in or register to reply here.
Similar threads