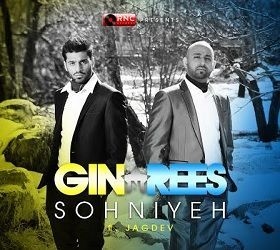 Gin & Rees, the music makers from East London release 'Sohniyeh' as a tribute to the incredibly talented Jagdev Jammu who tragically lost his life in a car accident at the age of just 35 - listen to promo and watch trailer here!​
The brothers had been working with Jagdev for some time and previously released the hit song 'Dil Aj Nachan Nuh' featuring Jagdev on vocals. They had almost completed his debut album when on the 1st October 2013, Jagdev sadly sustained fatal injuries in the crash and was pronounced dead on the scene. A great loss to the music industry and to those who did not get to witness his true talent.​
Gin says: "Jagdev was definitely a star in the making and we at RNC RECORDS will continue to release Jagdev Jammu's songs in the future in his memory. He was like our third brother. He lived for the music and we feel it's the right thing to do, to put out the music that he so wanted to release before he was taken from us. After working with Jagdev for 10 years in music, I can vouch for his god gifted talent in singing, composing and song writing. We were just months away from releasing his album and he was sure to have a prominent career ahead in our music industry, but god decided that he had other plans for him."​
GIN & REES - SOHNIYEH FT JAGDEV - OUT 19TH - DECEMBER 2013 OFFICIAL PROMO - YouTube
Rees adds: "This goes to show that god has only leased our life to us and therefore we need to appreciate it and what we have. It comes back to the old saying, you never know what you've got till it's gone! This is an incredibly sad time for everyone that has known him and is a grave loss to us all. Let us all honor the passing of this great soul by learning, appreciating and spreading love in our own lives."​
Always remembered and never forgotten. ​
R.I.P JAGDEV JAMMU (1976 - 2013)​
'Sohniyeh' releases on 19th December 2013 on the RNC Records label and is available NOW to pre-order via iTunes. Proceeds from the song will go to his family in India.