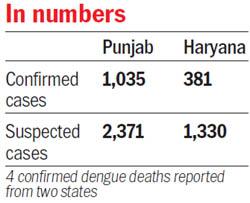 The alarming spurt in dengue cases in Punjab and Haryana has exposed the “poor” public health infrastructure in the two states. Most hospitals, private as well as government, lack the basic infrastructure to treat the endemic disease.
This year, Punjab has reported 1,035 confirmed dengue cases and 2,371 suspected cases so far, while Haryana has reported 381 confirmed and 1,330 suspected cases. Four confirmed dengue deaths have also been reported from the two states. Two more deaths in Punjab are suspected to have been caused by the vector-borne disease this year.
If Bathinda and Mansa districts of Punjab lead in the high incidence of disease (with Goniana town alone accounting for 100 cases), Haryana’s millennium city Gurgaon tops the chart with 111 cases so far.
Though Punjab has the facility for transfusion of plasma-rich platelets in all government-run hospitals, only six district hospitals and two medical colleges are equipped to segregate the single donor platelets. In Haryana, the situation is rather grim with most civil hospitals lacking the facility. Critical dengue patients (where platelet count falls below 20,000) have no option but to rush to either big hospitals such as the Post-Graduate Institute of Medical Sciences, Rohtak, or to private hospitals for expensive treatment.
Of the 1,035 confirmed cases in Punjab, officials say 153 are admitted to hospitals but others who are not serious are being treated at home. “This year, dengue cases have clustered in Punjab much earlier than expected due to the prevailing humid conditions since the monsoon showers in June. The yearly trends show that dengue peaks in October-November, but this year the incidence is rather high in the beginning of September,” said Vini Mahajan, Punjab’s Principal Secretary, Health.
The disease is cyclical, with dengue cases spiking every two years. “After a year of relatively few cases, the next year will see a massive surge in dengue cases. In 2011, Punjab reported 3,921 cases, followed by 770 in 2012, 4,000 in 2013 and 472 in 2014. This year, we again expect the number of cases to be high,” said Dr Gagandeep Singh Grover, state programme officer, vector-borne diseases, Punjab.
Both the state governments have announced free treatment for dengue patients at civil hospitals. Health officials say testing kits are available in adequate numbers and isolation wards for dengue patients have been set up in all civil hospitals. But in the wake of platelet transfusion facilities not being available, patients have no option but to shell out Rs 35,000-Rs 50,000 for treatment at private hospitals.
Private hospitals not using the recommended dengue kits is a matter of concern, with health officials fearing that the results would not be exact once samples are passed through the “un-recommended” kits. Officials in the Punjab Health Department say they have issued an advisory to all private hospitals to use only recommended testing kits. Another matter of concern for the health authorities is the mutation of the virus that causes the disease.
While fumigation and fogging is being carried out by the public health authorities at various places in Punjab and Haryana, the lavicidal activities are not being undertaken everywhere. Only in places where the dengue cases are reported, the lavicidal activities are undertaken and surveillance comes only after disease outbreak.
You must log in or register to reply here.
Similar threads