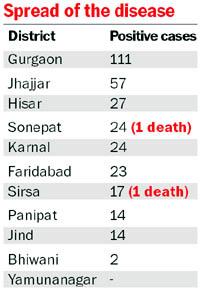 Dengue is spreading its dragnet in Haryana with 381 confirmed cases and more than 1,300 suspected cases reported so far.
Two persons have died of the disease in the state. Manisha (17), a student from Sonepat’s Bega village, died at a private hospital in Panipat on September 11. Dengue claimed the life of a pregnant woman, Poonam (22), on September 4. She was under treatment in a hospital of Dera Sacha Sauda in Sirsa. The victim was a native of Bathinda in Punjab.
The maximum number (111) of confirmed cases has been reported from Gurgaon. A reality check from across the state:
Gurgaon
The number of dengue patients in the Millennium City has reportedly reached 111. Wazirabad and Gurgaon villages have reported most of the cases. People in the age group of 18 to 50 years have been worst affected. Last year, 135 cases of dengue were recorded while, in 2013, dengue claimed three lives and 375 cases were registered.
Karnal
With three fresh cases, the graph of dengue patients has touched the 24 mark in the district, while 97 suspected cases have been reported so far.
The number could be high as scores of patients are under treatment in private hospitals. Civil Surgeon Dr Anita Aggarwal said four teams of the Health Department and Municipal Corporation have been keeping a check on the breeding of larvae of Aedes aegypti mosquito, the carrier of the dengue virus. “During the inspection of houses and other establishments, the teams found larvae from more than 1,000 coolers, water tanks and man-made containers,” she added.
Panipat
In all, 14 positive cases have been reported in Panipat so far. Civil Surgeon Inderjeet Dhankar said anti-larvae campaign was underway in the district.
Jhajjar
The district has recorded 57 confirmed and 26 suspected cases of dengue. Most of the cases have been reported from Bahadurgarh sub-division. Other badly affected areas are Bamdoli, Parnala, Saankhol and Jakhoda villages, and Linepar, Shastri Nagar, Vikas Nagar, Patel Park and Bats Colony. Isolation wards at Bahadurgarh and Jhajjar General Hospitals have been set up to treat patients.
Sirsa
With 17 confirmed and 57 suspected cases, the spread of dengue in Sirsa is almost thrice the number of cases reported last year. A pregnant woman, Poonam (22), died during treatment in Dera Sacha Sauda’s hospital in Sirsa.
“Several patients coming to Sirsa are from other districts of Haryana or from outside the state. The pregnant woman who died in Sirsa was from Bathinda,” said Dr Suraj Bhan Kamboj, Civil Surgeon.
Hisar
So far, 27 positive cases have been detected in the district, while the number of suspected cases has been on the rise. Dr Sushil Garg, medical officer in the Civil Hospital, said the Heath Department had launched a drive to eradicate Aedes aegypti mosquitoes from the town. The drive will continue till September 18.
Faridabad
The city has recorded 23 cases of dengue. District Malaria Officer Dr Ram Bhagat said a report of more than 200 slides of blood samples was still awaited. “Majority of the suspected cases are related to viral fever, showing a spurt after monsoon,” he added.
Jind
The district health authorities reportedly do not have the facilities to treat dengue patients and are referring them to Hisar and PGIMS, Rohtak. So far, 14 cases have been detected. “Hospitals in the district do not have the facility for platelet transfusion. Doctors are referring patients to other big hospitals,” said Dr RS Tanwar, Deputy Civil Surgeon.
Sonepat
Dengue claimed a life in the district, while 24 persons had been tested positive so far, said Civil Surgeon Dr JS Punia. “The patients with less than 20,000 platelets are referred to the PGIMS, Rohtak, and BPS Government Medical College for Women, Khanpur Kalan,” he added.
Yamunanagar
Two persons are suspected to be suffering from the vector-borne disease. One is from the district’s Devdhar village and the other is from Jathlana area.
Bhiwani
Two confirmed cases and seven suspected cases of dengue have been reported at Civil Hospital here.
You must log in or register to reply here.
Similar threads