Budget session to begin from Feb 23 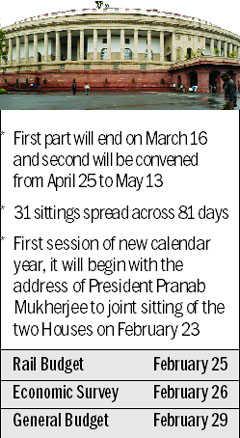 Ratification of the Ordinance relating to President’s rule in Arunachal Pradesh and passage of a Bill in respect of the Ordinance regarding Enemy Properties are among the top legislations the BJP-led NDA government plans to take up during the Budget session of Parliament from February 23 to May 13.
The dates for the session, which will go into recess between March 17 and April 24, were announced here after a meeting by the Cabinet Committee on Parliamentary Affairs chaired by Home Minister Rajnath Singh.
The government’s idea to do away with the recess in view of five Assembly polls around the period was resisted by the Opposition, with Leader of the Opposition in the Rajya Sabha Ghulam Nabi Azad saying the practice of Standing Committees evaluating the budget allocation for various ministries during the period should be followed and not curtailed.
The government sought the view at an informal meeting with leaders of various parties while citing the 2011 precedent when the Manmohan Singh Government curtailed the Budget session when elections to the Assemblies of Assam, Kerala, Puducherry, Tamil Nadu, and West Bengal were held.
Parliamentary Affairs Minister M Venkaiah Naidu, announcing the schedule, said the session opens with customary Address of President Pranab Mukherjee to a joint session of Parliament. The Railway Budget will be presented on February 25, Economic Survey the next day and the General Budget on February 29. Over the 81 days, the Budget session will have 31 sittings.
At the meeting, there was some difference over the date of commencement after recess with Congress leaders and Sitaram Yechury (CPM) insisting recommencing the sitting from April 10, objecting to a month-long break.
The government finally settled for April 25 after Bharatruhari Mahatab (BJD) sought time to accommodate festivals period and Derek O'Brien consented despite elections in West Bengal.
You must log in or register to reply here.
Similar threads