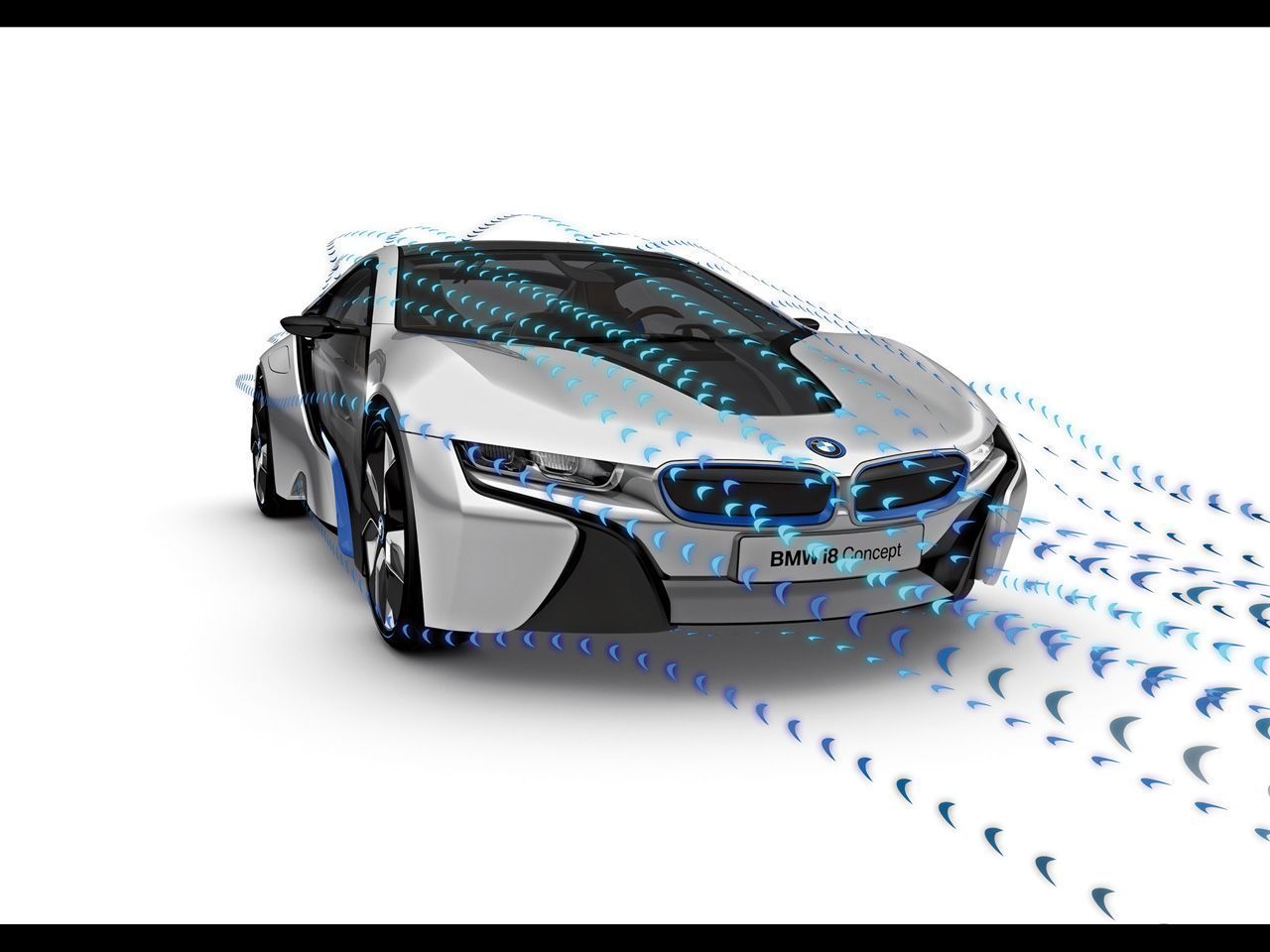 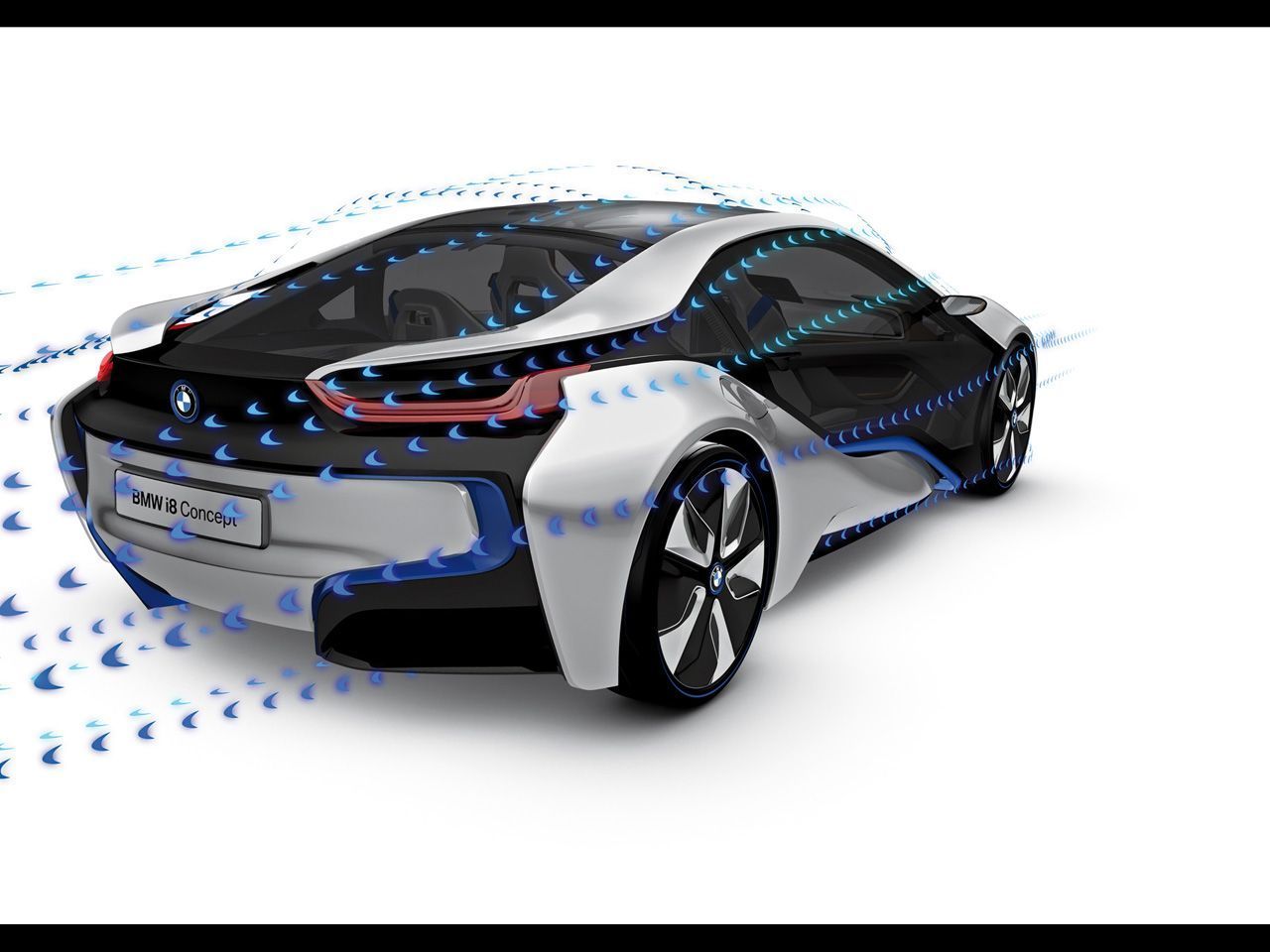 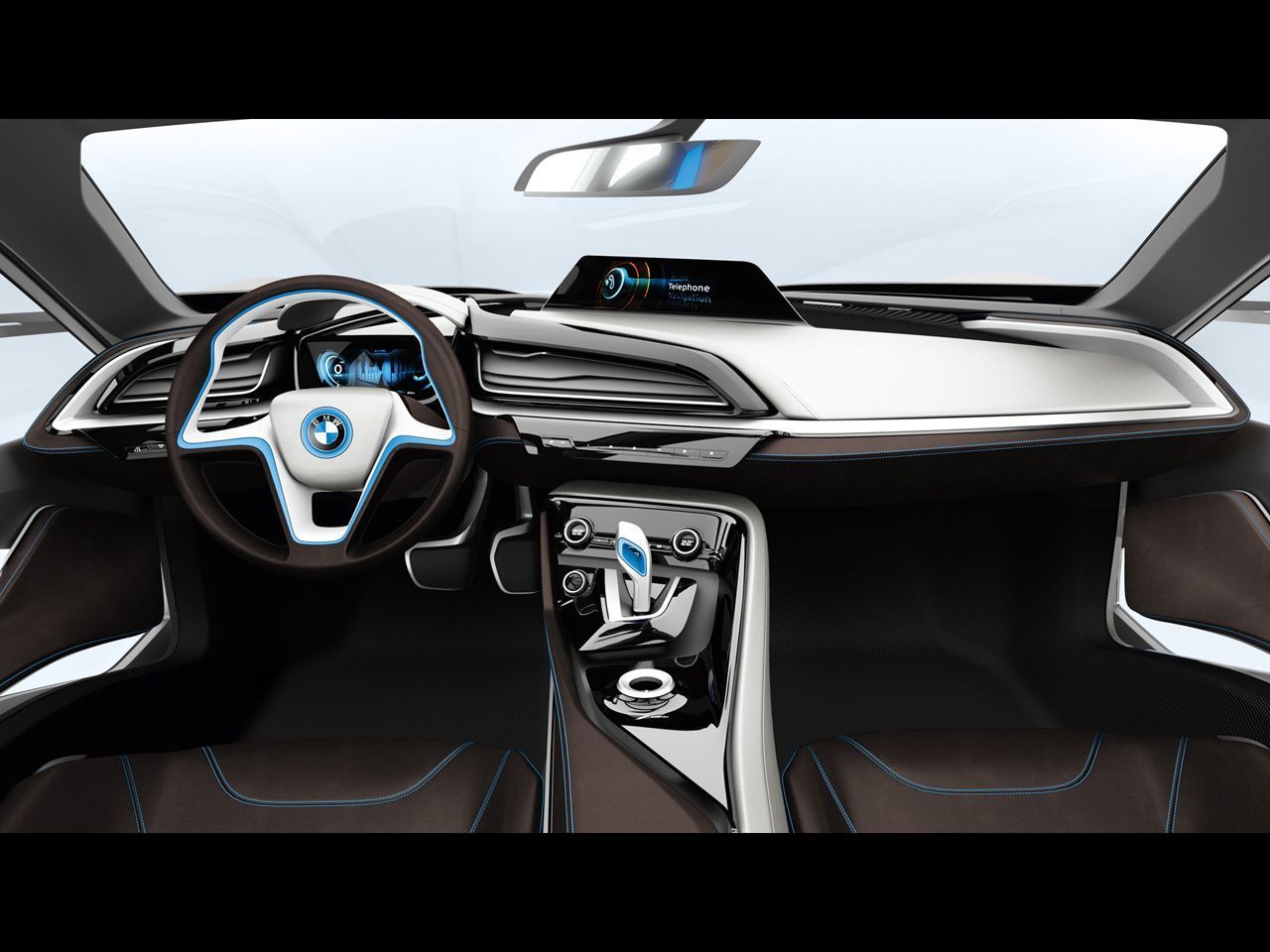 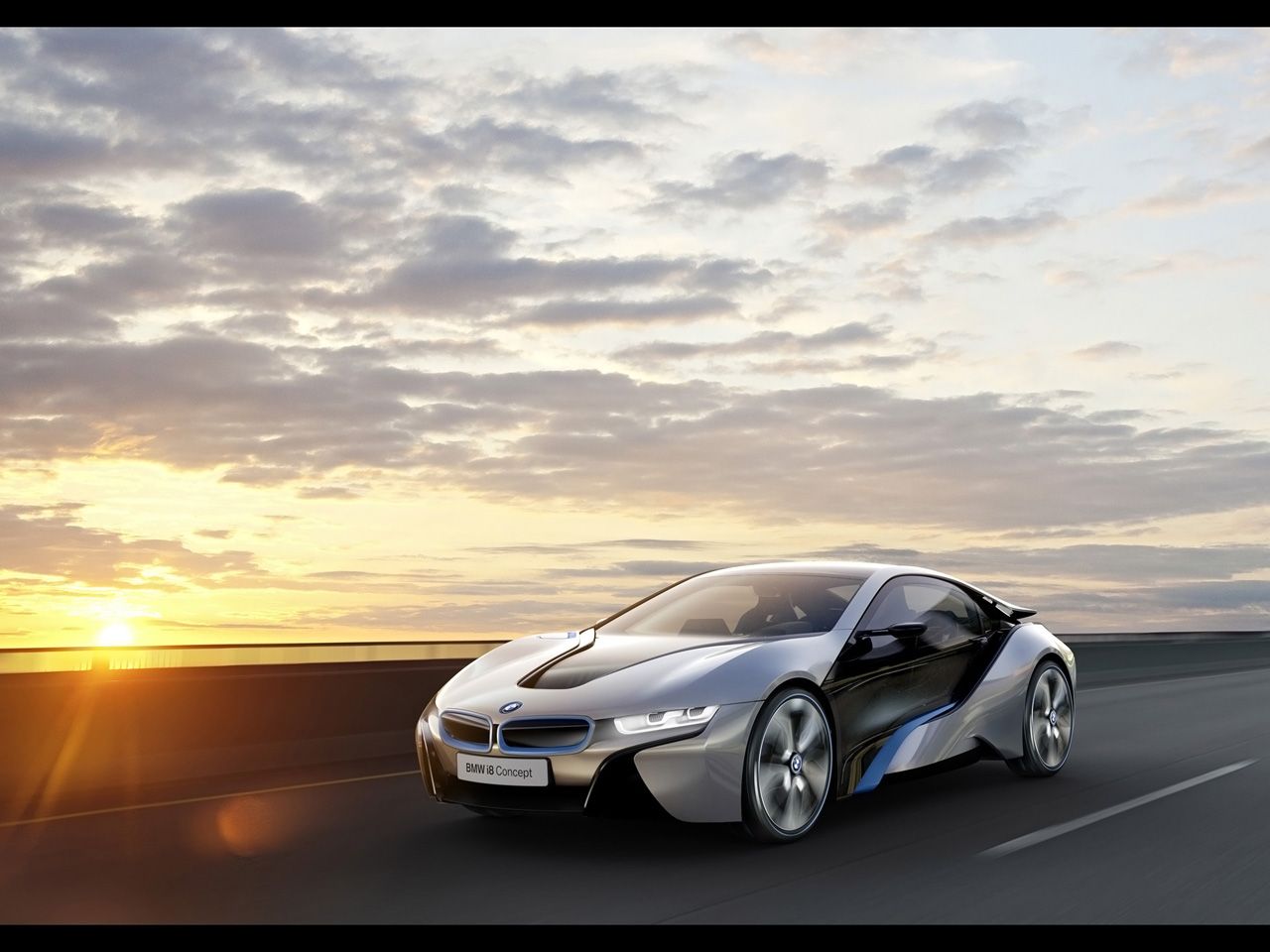 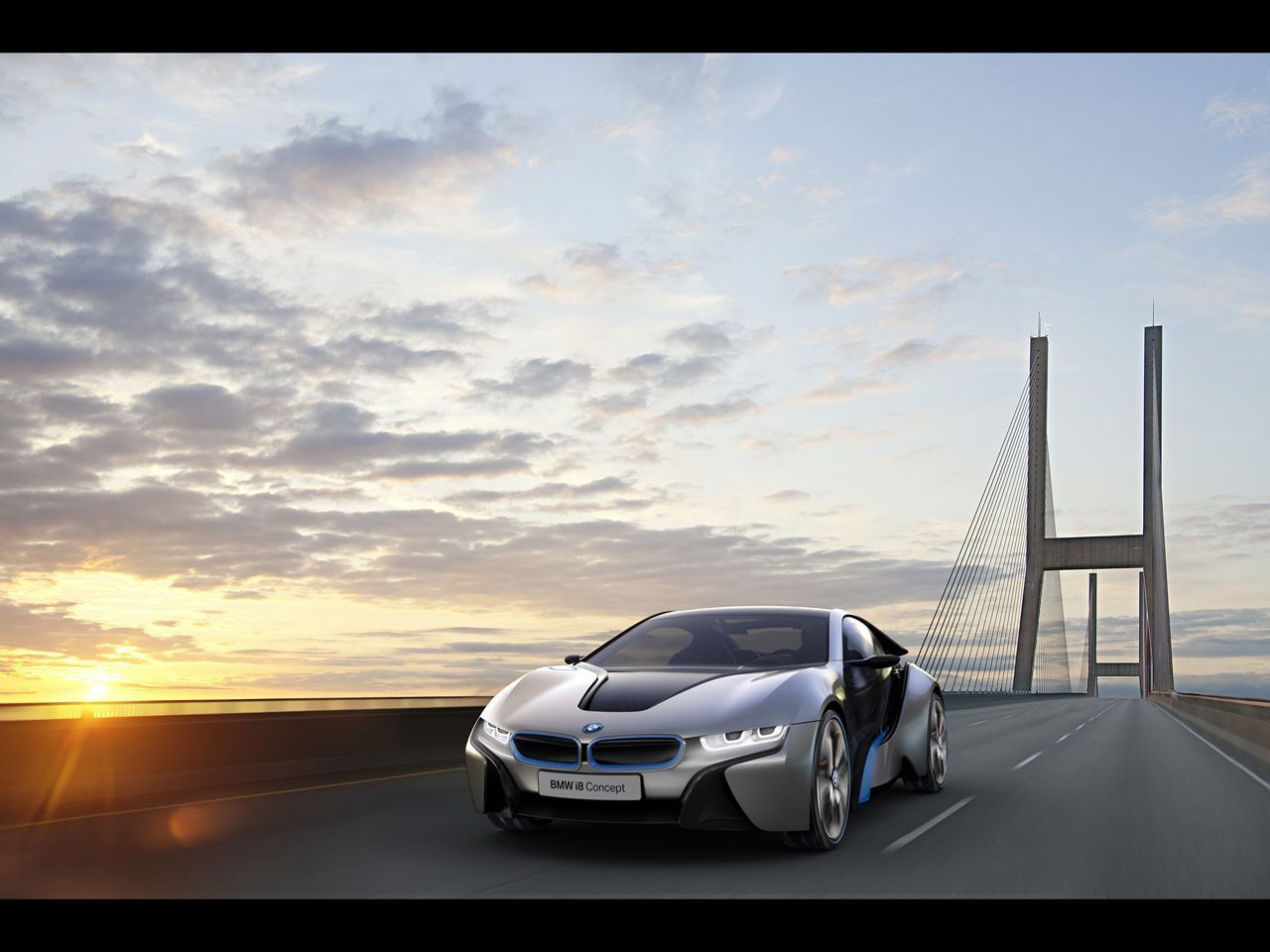 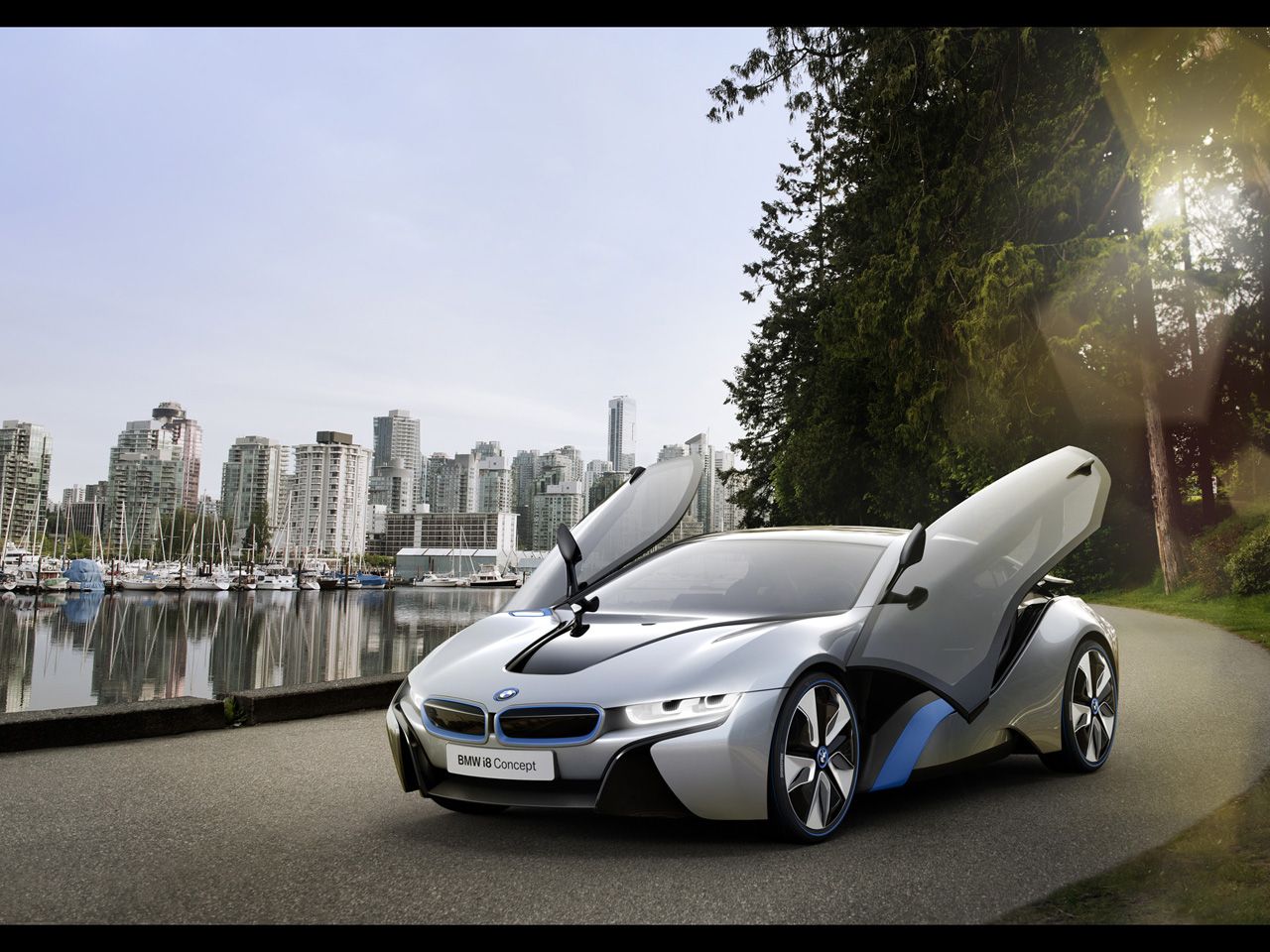 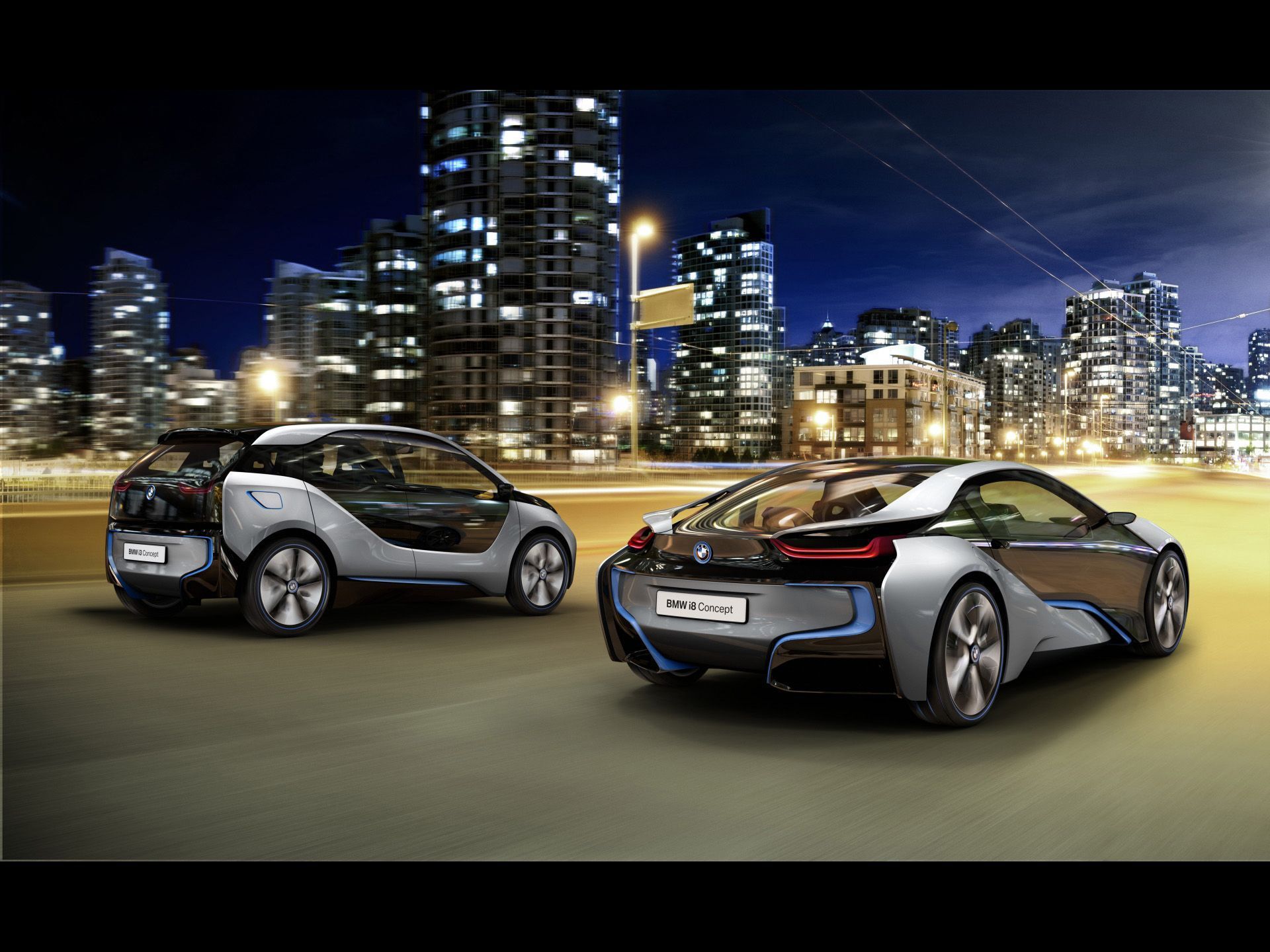 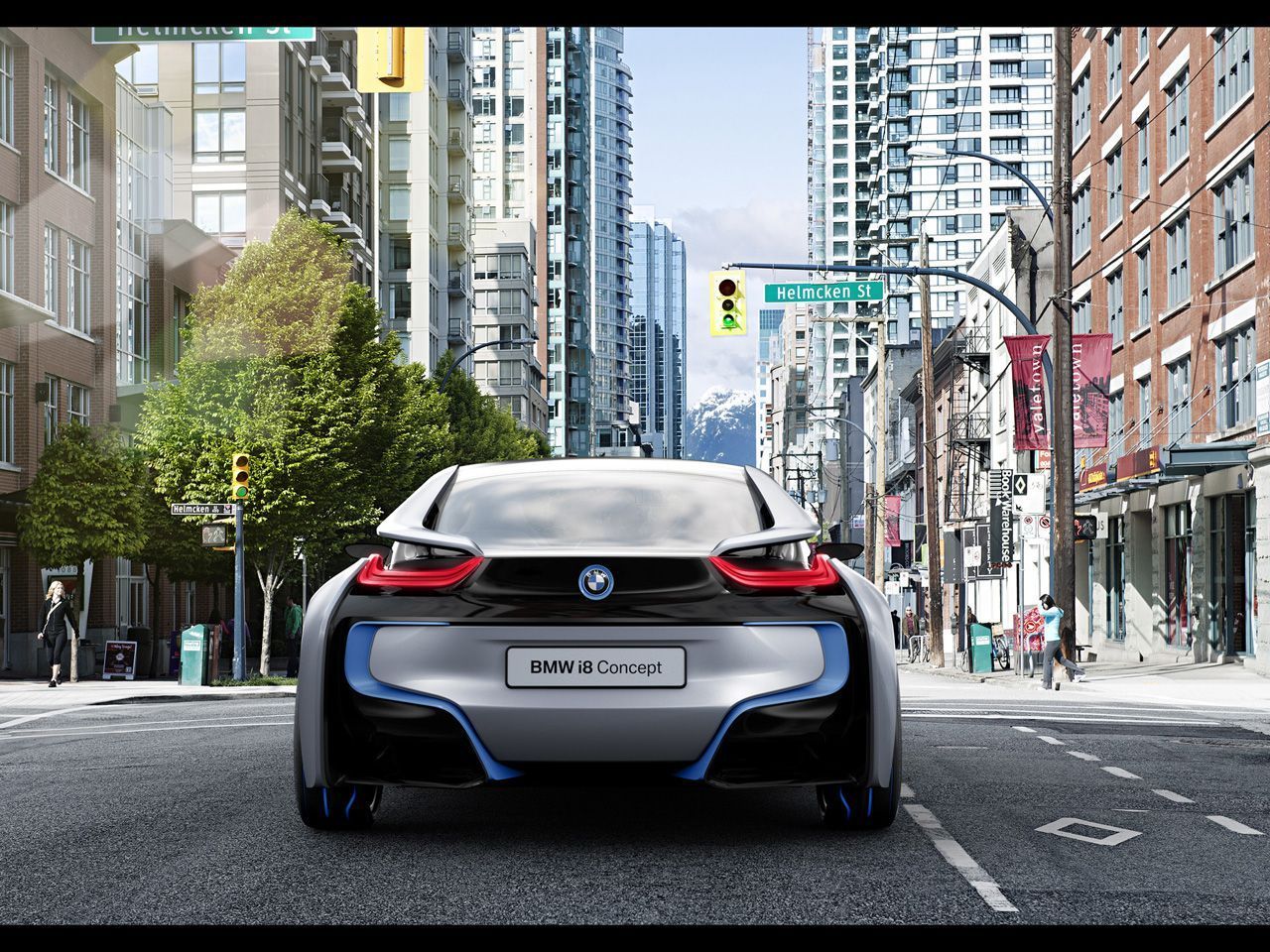 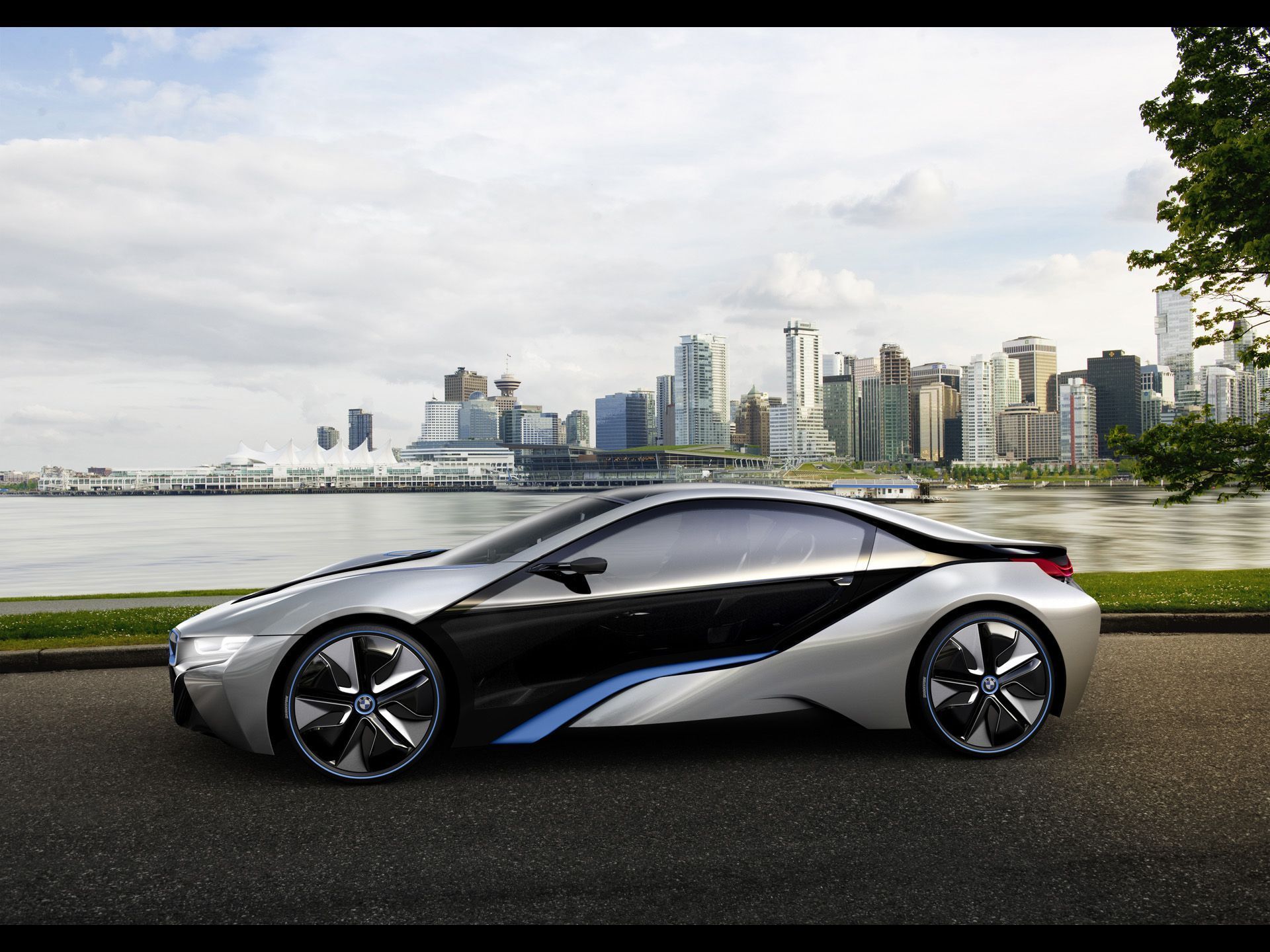 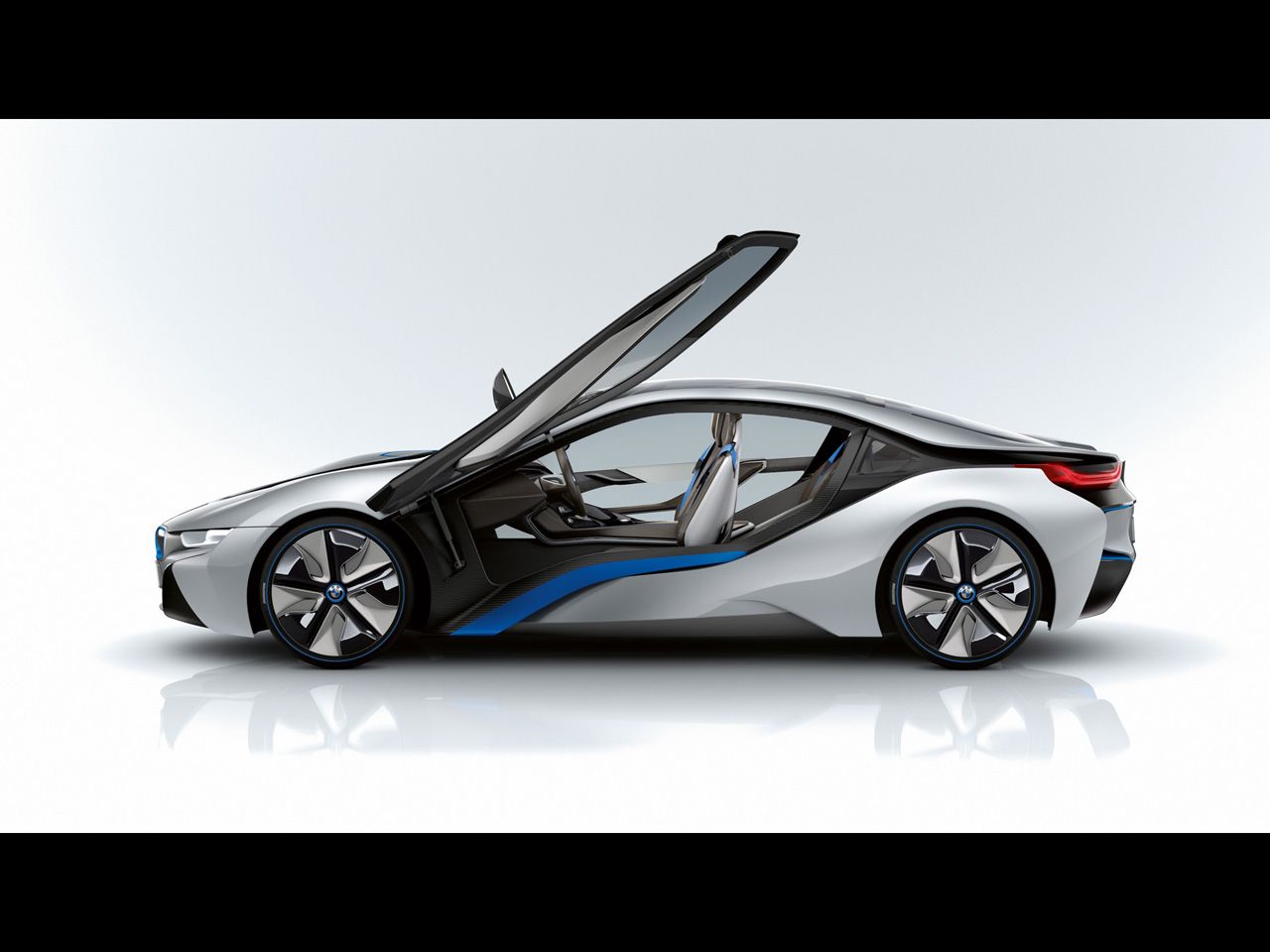 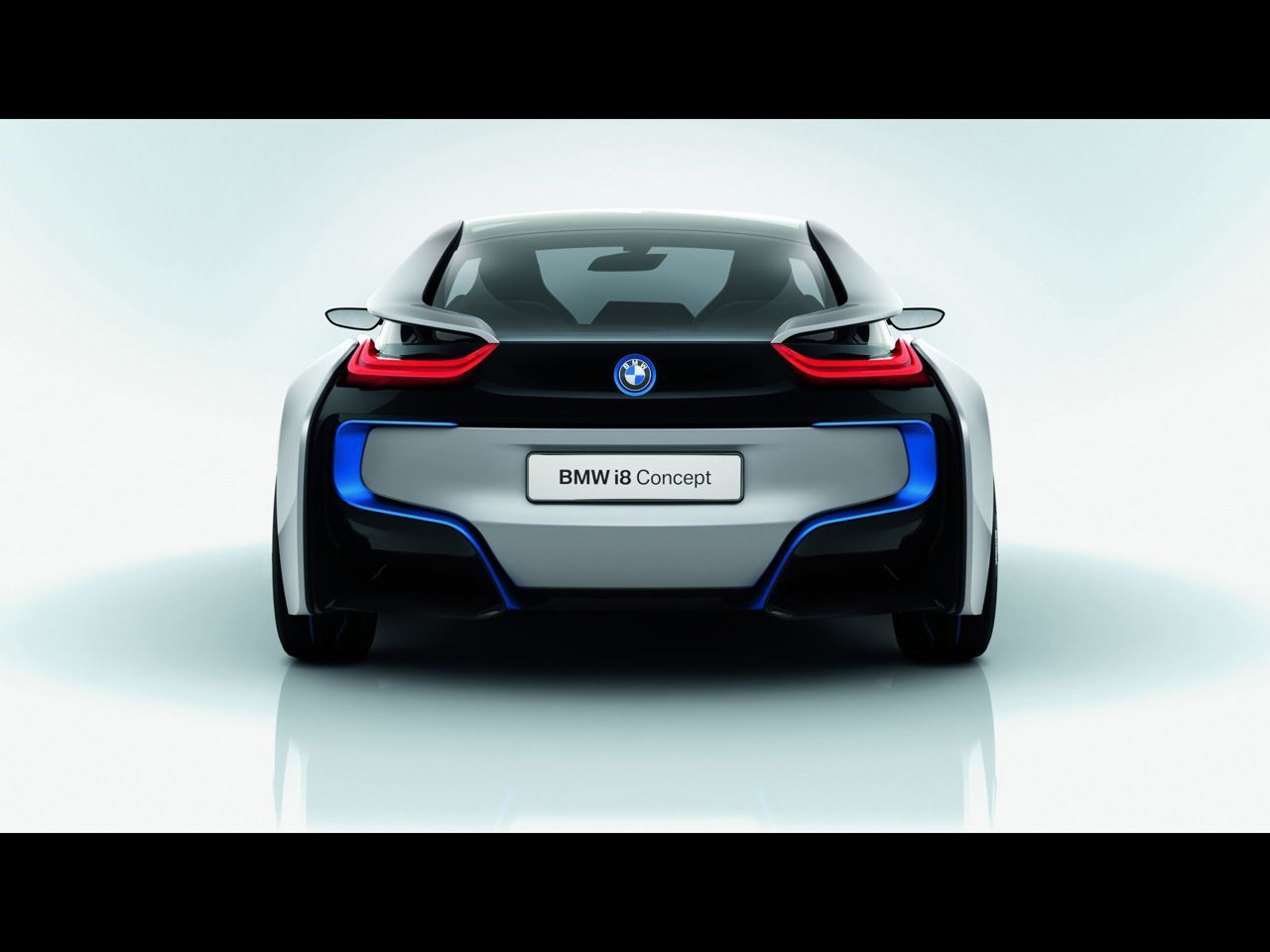 The BMW i8 Concept and the fascinating approach that underpins it embody the vision of a sustainable contemporary sports car brought to life. Its innovative plug-in hybrid concept combines the modified electric drive system from the BMW i3 Concept – fitted over its front axle – with a high-performance three-cylinder combustion engine producing 164 kW/220 hp and 300 Nm (221 lb-ft) at the rear. Working in tandem, they allow the two drive systems to display their respective talents to the full, delivering the performance of a sports car but the fuel consumption of a small car.

Acceleration of 0 to 100 km/h (62 mph) in under five seconds combined with fuel consumption in the European cycle of under three litres per 100 kilometres (approx. 94 mpg imp) are figures currently beyond the capability of any vehicle powered by a combustion engine of comparable performance. Thanks to its large lithium-ion battery, which can be charged from a domestic power supply, the BMW i8 Concept can travel up to 35 kilometres (approx. 20 miles) on electric power alone. Added to which, the 2+2-seater offers enough space for four people, giving it a high level of everyday practicality.
The LifeDrive architecture of the BMW i8 Concept has been carefully adapted to enhance the vehicle’s sports car character, and therefore to deliver unbeatable performance and excellent driving dynamics. The motor in the front axle module and combustion engine at the rear are connected by an “energy tunnel”, which houses the high-voltage battery. This gives the car a low centre of gravity – and the dynamic benefits that come with it. The positioning of the electric motor and engine over their respective axles and the space-saving and well-balanced packaging of all components result in an optimum 50/50 weight distribution.

The emotional design of the BMW i8 Concept ensures its qualities are clear for all to see. Its dynamic proportions give the BMW i8 Concept the appearance of surging forward before it even turns a wheel and lend visual form to its extraordinary performance.

The sporting character continues into the interior. Boasting a driver-focused environment unmatched by any BMW Group vehicle before it, the BMW i8 Concept immerses the driver fully in the unique driving experience. The BMW i8 Concept is the sports car for a new generation – pure, emotional and sustainable.

The LifeDrive architecture of the BMW i8 Concept.

The BMW i8 Concept sees the LifeDrive architecture concept adapted to suit the vehicle’s sports car character – i.e. primed to deliver leading performance and sharp dynamics. In a departure from the purely horizontal configuration favoured for the BMW i3 Concept, the LifeDrive architecture of its BMW i8 Concept sibling also features vertical layering. The drive systems powering the BMW i8 Concept are integrated into the front and rear axle modules, with the CFRP Life module providing the bridge between the two.

As a plug-in hybrid, the BMW i8 Concept is not designed purely for all-electric propulsion, and therefore carries fewer battery cells than the BMW i3 Concept. These are stored in the Life module inside the energy tunnel, a structure similar to a central transmission tunnel.

The front and rear axle modules therefore combine with the passenger cell and battery to form a functional unit, which adopts not only load-bearing responsibilities but also extensive crash functions. The location of the high-voltage battery in the energy tunnel gives the vehicle a low centre of gravity, and this enhances its dynamics. Together with the positioning of the motor and engine over the axles, the result is optimum 50/50 weight distribution. Intelligent lightweight design and the innovative use of materials produce extremely low unsprung and rotating masses, which is good news for the car’s driving dynamics, acceleration, range and fuel economy. All in all, the BMW i8 Concept offers the ideal environment in which to experience the special drive concept and distinctive sports car character of the BMW i8 Concept on the road.

The axles are also designed to deliver optimum handling properties, in keeping with the car’s sporting profile. Thus the multi-link front axle makes for an extremely flat and aerodynamically efficient silhouette while also eliminating any drive forces which may otherwise affect the steering, ensuring optimum handling in every situation.

Best of both worlds – the BMW i8 Concept.

The i8 Concept combines the advantages of two different drive systems. As a plug-in hybrid it reaps the benefits of an electric motor and an internal combustion engine for maximum efficiency with maximum dynamics. At the front axle is the electric motor adopted from the BMW i3 Concept and modified for use in the BMW i8 Concept’s hybrid power train, while a 164 kW/220 hp turbocharged three-cylinder petrol engine developing up to 300 Nm (221 lb-ft) of torque drives the rear axle. Together, the two drive units take the vehicle to a governed top speed of 250 km/h (155 mph). Like the electric motor, the 1.5-litre three-cylinder petrol engine was developed entirely in-house by the BMW Group and represents the latest state of the art in conventional engine design. Acceleration of 0 to 100 km/h (62 mph) in under five seconds combined with fuel consumption in the European cycle of under three litres per 100 kilometres (approx. 94 mpg imp) are figures currently beyond the capability of any vehicle powered by a combustion engine of comparable performance. Depending on charging habits and the nature of the route, it is even possible to improve on these figures.

The hybrid concept means that the BMW i8 Concept can also run purely on electric power. The energy supplied by the application-designed battery system installed between the front and rear axle modules to the electric motor at the front axle gives the BMW i8 Concept an all-electric driving range of approximately 35 kilometres (20 miles). The battery can be fully recharged in two hours at a standard power socket.

Thanks to the two drive systems, all four wheels of the BMW i8 Concept can be driven at the same time, similarly to an all-wheel-drive vehicle. This solution combines the advantages of front-wheel drive, rear-wheel drive and all-wheel drive to ensure the optimal dynamic drive configuration as required. Depending on traction conditions and driving situation, intelligent dynamic driving systems ensure maximum energy recuperation without compromising dynamics and stability. This allows very high levels of energy recuperation even in the wet or in snow.

Efficient and dynamic – the BMW i8 Concept

The design of the BMW i8 Concept is as special as the car’s overall concept, embodying the perfect synthesis of technology and aesthetic allure. Its sweeping lines and flat silhouette lend the vehicle a strikingly dynamic appearance even when standing still. A large, transparent greenhouse lends the exterior an extraordinary feeling of lightness and highlights the exceptional efficiency of this vehicle concept. Short front and rear overhangs round off the sporting overall impression. Despite its dynamic appearance, the 2+2-seater can accommodate four people, giving it a high degree of everyday practicality.

As with the BMW i3 Concept, layering again serves as the central design element of the interior and exterior. The individual vehicle components are also clearly visible from the outside, the black and transparent Life module clearly setting itself apart from the silver-coloured body components around it. This layering approach lends the BMW i8 Concept an extremely technical and cutting-edge appeal.

Taut surfaces and precise edges form an extremely sculptural and organic surface structure. The precise lines along its flanks and hallmark BMW i “stream flow” also give the BMW i8 Concept a strong sense of powering forward even when it is standing still. The BMW i8 Concept’s doors swing upwards like wings to provide an undeniably emotional and sporting allure. Below the doors, the silver-coloured layer moulds the car’s flanks into a powerful wedge shape, opening out from the door sills towards the rear. A blue flourish accentuates the dynamic presence of the sills. Together, the bonnet and door sill sculpting emphasise the BMW i8 Concept’s forward-surging stance, and their smooth lines imbue the car with a touch of lightness.

The BMW i8 Concept also displays its dynamic sports car persona when viewed from the front. A number of different levels interact with one another in the design of the front end, while the expressive surface treatment exudes dynamic verve and advertises the car’s sporting potential. The full-LED headlights of the BMW i8 Concept are designed as two U-shaped configurations.

A black, semi-transparent “V” rises out of the bonnet just behind the kidney grille, opening out towards the windscreen and guiding the eye to the electric motor below. The “V” also offers the first glimpse of the CFRP module and extends back towards the rear like a black band to provide a visual connection between the different sections of the car.

Similarly to the front end, the rear of the car is also very low, horizontal and sculptural in design. The silver-coloured side sections form a striking vertical frame around the rear of the car, with a precise line extending out to the sides enjoying particular prominence. In its centre the silver-coloured and blue-framed rear diffuser is a wider and lower interpretation of the version on the BMW i3 Concept, adding a distinct sporting flavour to its relationship with its stablemate.

At the rear, the car’s exceptional sporting credentials are also expressed in width-accentuating lines, three-dimensional air outlets and “floating” tail lights with air through-flow. The tail lights, which also have a distinct horizontal design, are integrated into the upper layer of the rear and share the signature U-shape of the BMW i light concept.

The transparent surfaces in the doors and roof give the exterior and interior design of the BMW i8 Concept the appearance of merging into one another. The colour concept and underlying structure of the BMW i8 Concept interior closely mimic those of the BMW i3 Concept. Here again, the Porcelain White support structure, black technical level and comfort section with Mocha Brown leather are split into three different layers. The arrangement of the air vents, control panels and displays also betrays the car’s family ties to its BMW i3 Concept sibling.

Overall, however, these features have a more sporting character and are geared much more clearly towards the driver. Indeed, a level of driver focus beyond that of any BMW Group vehicle before it allows the BMW i8 Concept to immerse the driver fully in the unique experience behind the wheel. Driver-relevant functions such as the gearshift lever, start-stop button and parking brake are arranged around the driver on the centre console and are graphically strongly geared towards the driving seat as well. The three-dimensional displays are extremely clear and flash up the relevant information for the driving situation at hand. At the same time, occupants in the BMW i8 Concept sit in a highly integrated position low down in the car and are separated by the battery running lengthways through the interior. This longitudinal bisection of the cabin underlines the sporting and forward-looking character of the BMW i8 Concept interior.

The 8.8-inch (22.4 cm) freestanding information display in the dash is joined by an equally large display taking the role of the instrument cluster. Indeed, its high-quality presentation in the binnacle makes it look far larger. Designing the central instruments in this way enables driver-relevant information to be conveyed in a three-dimensional and high-resolution format. In keeping with BMW i style, the displays are premium, modern and purist. Depending on the driving mode, the two drive systems are depicted by a pair of ellipses, which supply information on their operation at any given time. Other information – such as the available range and fuel level – can be found here, too.