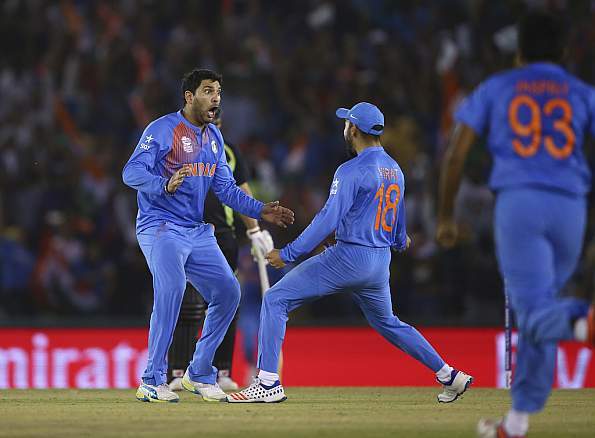 Experienced left-handed batsmen Yuvraj Singh and Shikhar Dhawan have been named in a 15-man India squad for the upcoming three-match One-Day International series against England. The five-member senior selection panel, headed by MSK Prasad, also officially announced Virat Kohli as captain of the ODI and T20I teams. The 28-year-old Kohli takes over the limited-overs sides from MS Dhoni, who stepped down from the post earlier this week after leading India in 331 games across formats.

Rishabh Pant, the 19-year-old Delhi batsman, has been handed his maiden senior team call-up with the selection committee including the precocious batsman in the squad for the shortest format. Pant had plundered 972 runs at an average of 81 to go with an astonishing strike rate of 107 in the 2016-17 Ranji season, including a triple century.

The major talking point of the announcement was the return of the 35-year-old Yuvraj, who also finds a mention in the T20I squad. The flamboyant left-hander, who played the last of his 293 ODIs so far in 2013, scored 672 runs from five Ranji Trophy games this season at an average of 84. His exploits in the domestic circuit included two hundreds and as many half-centuries.

Besides Yuvraj and Dhawan, the squad for the 50-over format sees returns for R Ashwin, Ravindra Jadeja, KL Rahul and Bhuvneshwar Kumar - all of whom missed the team's previous assignment against New Zealand either due to injury or were rested as an exercise in player workload management.

Suresh Raina, who missed that series in October due to illness despite being named in the squad, loses out on the middle-order place to Manish Pandey, with the selectors keeping faith in the Karnataka batsman despite lukewarm returns against New Zealand (76 runs from 5 matches at 19.00). The 30-year-old, however, has been picked in the shorter T20I format. Regular opener Rohit Sharma, recuperating after undergoing surgery for a thigh tendon injury, is the other notable absentee from the batting line-up.

The pace bowling department, in the absence of Mohammed Shami (knee injury), will be spearheaded by Umesh Yadav. He will be joined by death-overs specialist Jasprit Bumrah and Bhuvneshwar with Hardik Pandya filling in as the seam-bowling all-rounder.

Amit Mishra (15 wickets at 7.50) and part-timer Kedar Jadhav (6 wickets at 12.16), who enjoyed productive outings against New Zealand, have been retained alongside the regular spin pairing of Ashwin and Jadeja as the Kohli-led Indian team looks to fine-tune all its bases ahead of its Champions Trophy defence in England in June.

Meanwhile, India welcome back veteran seamer Ashish Nehra in the T20 squad. The 37-year-old seamer, who earned a shock recall ahead of last year's T20I assignment in Australia, picked up a hamstring injury during the IPL and experienced a lengthy spell on the sidelines. In the batting department, Rahul and Mandeep Singh have replaced Rahane and Dhawan.

Stuart Binny and Amit Mishra, who were part of the travelling continent for the two T20Is against West Indies in USA, have been replaced by Pandya and Yuzvendra Chahal respectively.

The three ODIs will be played at Pune (January 15), Cuttack (January 19) and Kolkata (January 22) and will be followed by the T20Is at Kanpur (January 26), Nagpur (January 29) and Bengaluru (February 1). An 'A' team will play the visiting England side in two warm-up 50-over encounters at the Brabourne Stadium in Mumbai before the ODI series gets underway in Pune.

Squad for the three-match ODI series:

Squad for the three-match T20I series: