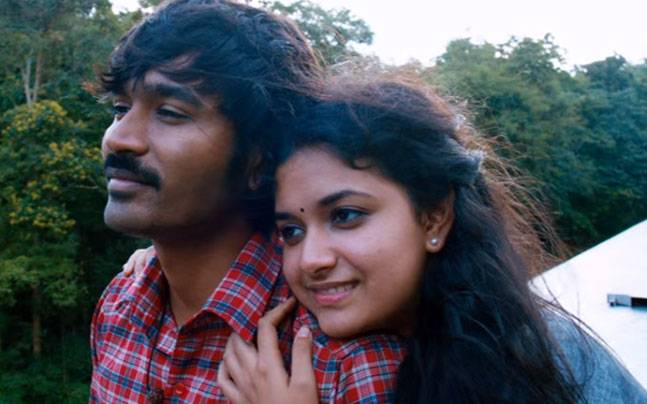 After churning out disasters like Maari and Thanga Magan, Dhanush is back on the silver screen with Thodari. Will this be his much-needed breakthrough? Here's our Thodari movie review.

Cast: Dhanush, Keerthy Suresh, Thambi Ramaiah and Karunakaran
Director: Prabhu Solomon
Rating: (1.5/5)
Of late, Dhanush is bearing the brunt of not being able to deliver hits. His last hit was in 2014. Even his Thanga Magan (2015), which looked like a film adaptation of a television serial, bombed at the box office. Hence, Thodari is an important film for Dhanush's market value today.

At the core of of Thodari is the journey of Poochiyappan (Dhanush), a pantry worker and Saroja (Keerthy Suresh), the touch-up girl of a Malayalam actress, on board a train from Delhi to Chennai and the tussles encountered by the couple in a matter of 24 hours. Doesn't it sound like Jan De Bont's Speed (1994)?
The concept of love at first sight is stale in Tamil cinema. Yet, some of the directors have never ceased to glorify it. Director Prabhu Solomon's Thodari is no exception. Poochiyappan falls for Saroja in the blink of an eye. She is his sweetheart and he's willing to push boundaries to win her heart. As for Saroja, she aspires to become a lead singer like Chitra and Shreya Ghoshal, and hence, she's also known by the nickname Chitra Ghoshal (*lol*).
Though the film goes back and forth in time with its narration, the story unravels when a central minister (played by Radha Ravi) boards the train. The minister's security guard (played by Uthaman), a pro-Malayali, ends up getting on Poochiyappan and Saroja's nerves repeatedly.
Thodari, the train journey, veers off course into a sub-plot of hijacking. Will Poochiyappan and Saroja save the passengers or will they save themselves? That's Thodari for you.

Among the pool of talent in Kollywood, Dhanush is a great actor, and we believe he too is aware of that. But when he opts for a film like Thodari, or Thanga Magan for that matter, that's when one ponders over the question, "What the heck is wrong with you?" Come on, Dhanush. You know the film would never have worked, even if it had you playing a larger-than-life character.
Most people didn't care a damn about the sexism in Dhanush's 'Why This Kolaveri Di?', they took his misogynist dialogues in Mayakkam Enna (2012) in their stride because these were written/delivered by the characters and not Dhanush. But when this becomes a custom in Dhanush's films, that's when it gets intolerable. Thodari too has several misogynist dialogues.
Keerthy Suresh plays Dhanush's love interest in the film. While Thodari is packed with stereotypes, Prabhu Solomon does nothing to break the stereotypical depiction of the heroine and has used Keerthy Suresh merely as a filler.
Chandrakanth, played by Thambi Ramaiah, tries mighty hard to deliver the ROFL-LMFAO moments in the film. He succeeds at times, but most of his one-liners are blah. Unlike many artists, Thambi Ramaiah's presence is felt throughout the film and raises the obvious question, "Is Dhanush playing an extended cameo in Thodari?"
Apart from the director's train-wreck story, the biggest problem of Thodari is its run-time, which is close to three hours. Prabhu Solomon begins his film well, narrating the lifestyle of pantry workers at a leisurely pace. The audience is seen hooting and cheering for Dhanush in these scenes.
However, when the film takes a bland twist right before the pre-interval scene, that's when you get to notice the interiors of the theatre, the lighting and how comfortable your seat is. With a half-baked first half, Thodari falls completely flat in the second half, and ends up as a run-of-the-mill film.
Thodari has five songs composed by D Imman. Neither the songs nor the soundtrack does anything to lift the film above the mediocre. There's one particular portion in the second half that leaves the audience with fists clenched. It's when Poochiyappan shakes a leg to the song Ponna Usuru, even as his surroundings are falling apart.
However, Thodari poses tough competition to Dhanush's Thanga Magan, as far as bad films of the actor are concerned. The blatant truth is that Thodari veers between fu** all and holy sh** and reaches no destination at the end of the day.
You must log in or register to reply here.
Similar threads
Don’t Worry Yaara, an upcoming Punjabi movi
Amar Sandhu & Epic Bhangra - Lover's Island (Review)
The Black Prince (Public Review) | Satinder Sartaaj | Shabana Aazmi
Jagga Jasoos movie review: Ranbir Kapoor, Katrina Kaif live a fairytale
Super Singh (Public Review) | Diljit Dosanjh | Sonam Bajwa | Dainik Savera
Share:
Facebook Twitter Pinterest WhatsApp Link
Top