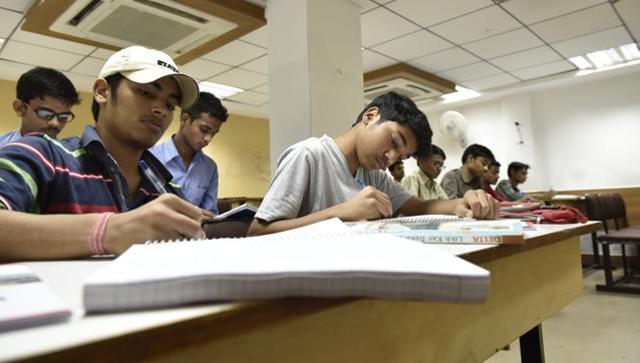 The engineering dream appears to be losing steam.
The number of candidates taking the joint entrance examination (JEE) for engineering institutes has dipped over the past two consecutive years, a first in the history of what is considered one of India’s toughest tests.
The candidates who took the JEE dropped by 27,000 this April from last year, and by 56,000 in 2015 when compared to the preceding year.
More than a million students take the two-part test every year and the number of aspirants has risen by 20,000 to 30,000 every year since 2008.
But academics say the real story is not in the absolute numbers – which form a small chunk of the total IIT aspirants – but in the broader trend that mirrors a shift in social attitudes.
Younger generations are unwilling to follow their parent’s example and enrol in an engineering course, long considered a safe bet for an aspiring middle class, they say. Fewer cushy engineering jobs have dissuaded students further.
“More parents and students are now willing to experiment rather than take the traditional route,” said Lata Vaidyanathan, former principal of Delhi’s Modern School, Barakhamba Road.
The sliding numbers have alarmed the human resource development ministry, which is set to discuss the matter at a meeting with the IIT council next month, officials said. 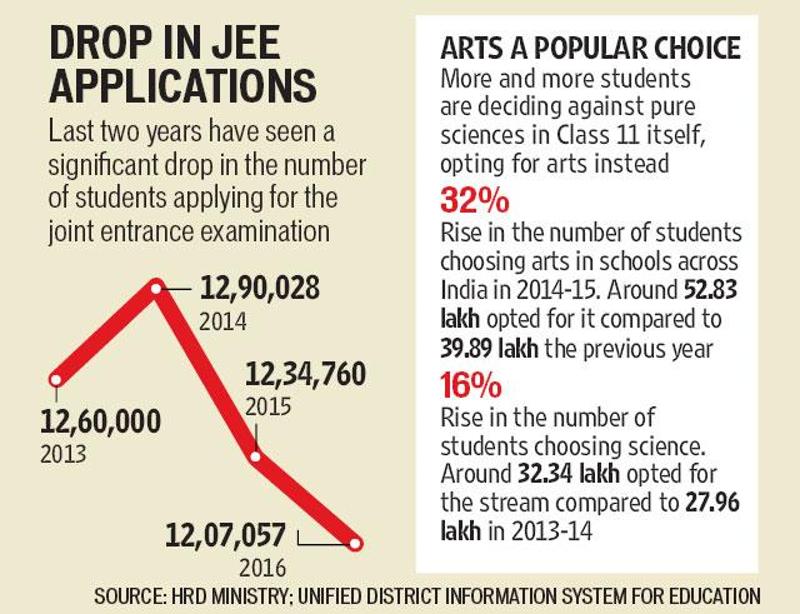 The idea is also to assess if the trend mirrored a decreasing interest in science as is evident at the school level, they added.
Official data on enrolment in Indian schools show more Class XI students opting for humanities as the demand for pure sciences drops. This, academics say, is because more people want to study subjects such as Economics and Mathematics – available under the humanities umbrella.
“Students who want to do an MBA later don’t want to waste an additional year doing engineering. They can do Economics honours or anything else,” Vaidyanathan said. “Students are more creative today. They have greater entrepreneur skills; it reflects in the choices they make.”
An alumnus of the Indian Institute of Management-Calcutta told HT he graduated from the Delhi College of Engineering before doing an MBA. “In hindsight, I would have rather done an honours course in economics and then MBA. It would have saved me a year,” he said.
Coaching institutes said the dip was because of falling standards of education in India, which produces 800,000 engineering graduates annually from 3,000-odd registered technical institutes.
“Engineers are not getting good jobs as earlier. There has been a reduction in the number of students coming here,” said Naveen Maheshwari, director of Allen Institute in southeast Rajasthan’s Kota—a popular coaching destination for competitive exam preparations.
But the IIT Council that is responsible for all Indian Institutes of Technology dismissed the speculation.
“There are almost 1.3 million students who sit for this exam; so the dip is not significant at all,” said Ashok Misra, chairman of the standing committee of the IIT Council. “Also, we have local colleges and students might be opting for that. All the same, it is good if more students are opting for humanities.”
The JEE has been conducted in two stages – Main and Advanced -- since 2012. The JEE (Main) is the qualifying exam for admissions to centrally-funded technical institutions such as National Institutes of Technology, Indian Institutes of Information Technology and institutions in the participating states.
Of those taking JEE (Main), the top 150,000 to 200,000 are short-listed for the JEE (Advanced) for admissions in IITs. Till 2012, the All India Engineering Entrance Examination and IIT-JEE were conducted as separate exams. The new system for admissions in engineering courses came in place in 2013.​
You must log in or register to reply here.
Similar threads