The Battle of Muktsar

The Battle of Muktsar

"Count as heroes only those who die for upholding the Truth.
They never show their back to the enemy but fight to the last."
[SIZE=-1](Guru Granth Sahib)[/SIZE]​
Nawab Wazir Khan, the viceroy of Sirhind, became aware of the Guru's escape only after the latter had reached Dina. Wazir Khan also learned about the Guru's warm welcome and stay with Lakhmir and Shamir, the Chaudhries (Land Owners) of Dina. He, therefore, sent a stern warning to the Chaudhries telling them to hand over the rebel Guru. And if they failed to do so they would be severely dealt with. Chaudhri Lakhmir did not care about Wazir Khan's warning and replied that it was their moral duty to help the great Guru in his just cause.
Wazir Khan was greatly angered at the letter from Chaudhri Lakhmir. He immediately started mobilising his forces. This news spread through the whole country and reached the Guru. As the news spread, the Guru's followers thronged to his court. The Guru himself made an extensive tour of the villages in the Malwa and organised his Sikhs in a few days. People In large numbers received the baptism of the double-edged sword and got ready to resist Wazir Khan's forces.
The Guru did not consider Dina a suitable place for battle. He, therefore, moved on to Kot Kapura. It was decided that the mound of Khidrana was a very suitable place to defeat the invading armies. The Khidrana lake was the only source of water throughout the wild country. The mound was also surrounded by thorny bushes for mites. The Guru planned the defence in such a way that the Imperial forces should be checked at a distance so that they should not have access to the lake. 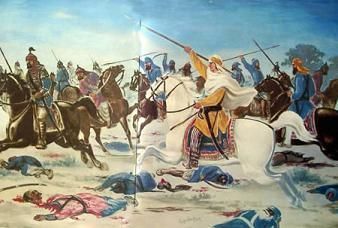 The Sikhs who deserted the Guru at Anandpur were put to shame by their womenfolk when they reached their homes. One brave lady Mai Bhago gathered forty such men and brought them to the aid of the Guru along with a number of Majha Sikhs from the area around Amritsar. This contingent took up a position where they could intercept the enemy before it reached the Guru's encampment. The mound and the pool were sufficiently fortified by the Guru. The Guru himself took up a position on the mound and directed the operation from there.
It was May 1705. The Sikhs engaged the Mughal forces. A large number of Sikhs who were lighting on the Eastern side of the mound were giving way to pressure from the Royal armies when all at once the forty deserters charged and cut off the ambitious band of attackers. The Guru also sent reinforcements, He showered arrows from his strategic position on the mound, down on the Imperial army, killing a number of them. The resistance of the Sikhs became so fierce that the invaders were completely demoralized. The enemy became restive for want of water. It was not possible for them to reach the lake of Khidrana. The only water they could get was fifteen miles behind them. Thirst and oppressive heat, and the tough resistance offered by the Sikhs, compelled the Mughal army to retreat. 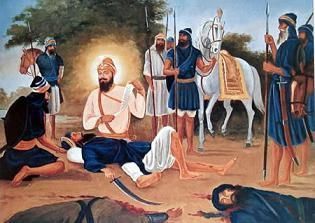 After the retreat of the Mughal forces, the Guru came down from the mound towards the Eastern side where the Sikhs had checked the advance of the enemy. The Guru personally visited the heroes and taking the head of each hero in his lap, wiped the dust off his face and blessed him. One of the forty deserters, Mahan Singh by name, was fatally wounded but was not yet dead. He opened his eyes at the loving touch of the Master. The Guru said to him, "I am pleased with you all for the wonderful act of your bravery, Is there anything you desire of me?" Mahan Singh folded his hands and replied faintly. "If you are really pleased, Lord, then tear up the document of shame whereby we disowned you at Anandpur." The Guru's heart was moved. He took the paper from his pocket and tore it to pieces. Mahan Singh thanked the Guru and then died with his heart at peace. Then the Guru found the place where the brave lady Mai Bhago lay wounded. She was unconscious. A little aid revived her. The Guru was greatly pleased with her and blessed her. The bodies of the martyrs were gathered and cremated.
The Guru named this place Muktsar, which means "the pool of salvation." He also styled the heroes as the forty Muktas (Saved ones). Ever since, a great fair has been held every year at Muktsar in memory of this great event.
"If you wish to show your true love for me,
Come to me with a promise to accept martyrdom.
Those who follow my instructions,
Must be ready to sacrifice their lives for the faith."
[SIZE=-1](Sri Guru Granth Sahib)[/SIZE]​

heaven's got a hitman

Keep it Up.
You must log in or register to reply here.
Similar threads
Greatest battle of all time
Battle of Saragarhi "Lest We Forget"
The battle of Bhangani.
First Battle of Sikhs
Punjab Da Sab To Sohna Pind - Sakkanwali, Shri Muktsar Sahib
Share:
Facebook Twitter Pinterest WhatsApp Link
Top