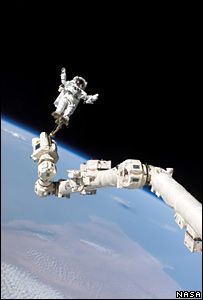 A company that blasted the first space tourists into orbit is offering future clients the chance to do a space walk.
Space Adventures say the optional excursion will cost $15m (£8m) on top of the $20m cost for the flight.
For that, private space explorers will get a 1.5 hour accompanied extra-vehicular-activity (EVA) outside the International Space Station (ISS).
The EVA would lengthen a stay on the ISS from 10 days to between 16 and 18 and would require additional training.
Eric Anderson, president of and CEO of Space Adventures said they already had "potential clients" for the spacewalks.
Those with enough money would get to "hang out" outside the space station with a trained cosmonaut as a guide, he said.
"One and a half hours in about one orbit of the earth so they'd see the entire planet," said Mr Anderson. "They'd experience complete day-time and night-time and watch the planet in its beauty and splendour."
Rigorous training
Space Adventures has previously sent three private explorers to space. 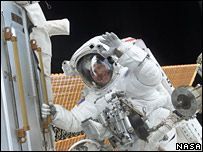 In 2001, American Dennis Tito was the first space tourist. He was followed by South African Mark Shuttleworth the year after and American Greg Olsen last year.
Japanese entrepreneur Daisuke Enomoto is currently training for his spaceflight scheduled for September.
All flights to the ISS are on board Russian Soyuz spacecraft.
Training for the flight takes six months at the Yuri Gagarin Cosmonaut Training Centre in Star City, Russia.
Private space explorers hoping to complete a spacewalk will also have to undergo an additional 190 hours of training including underwater EVA simulations, spacesuit training and altitude chamber training sessions.
Space adventures says the amount of training is less than a typical astronaut.
Professor Jeff Hoffman, an ex-Nasa astronaut who has spent over 24 hours doing spacewalks, completed 400 hours of underwater training before a spacewalk to fix the Hubble Space Telescope.


"On top of that there are also numerous other simulators where we practice space suit malfunctions, to say nothing of the physical work we do just looking at the guts of the space suit," he told the BBC News website.
"Then we did a fair amount of work in vacuum chambers wearing our space suits - so it was a huge amount of work.
"But if you just wanted to take someone and throw them in a spacesuit so they survive outside you wouldn't need nearly that much training. For us it was so we could do useful work."
Moon gazing
Alexei Krasnov, director of the manned spaceflight department at the Russian Federal Space Agency said that the decision to take space tourists outside the ISS had been made after "careful consideration". 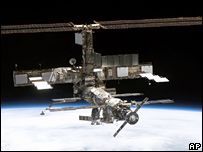 Space walkers will be accompanied by a Russian cosmonaut


In addition to training, he said, potential candidates would also have meet "physical and psychological capabilities" before being considered for an EVA.
However, even meeting strict criteria and with money up front there are no guarantees that they will definitely step outside the space station.
"If everything goes to plan then we can go ahead and do it," said Mr Anderson.
"But we're not going to do it if it jeopardises the crew or the person doing it".
Although no one has signed up for a space walk yet, Space Adventures has a "number of potential clients" who could blast off in 2007 or 2008. The following year, the firm plan to go one stage further and launch the first commercial trip around the moon. The flight will cost an estimated $100m.