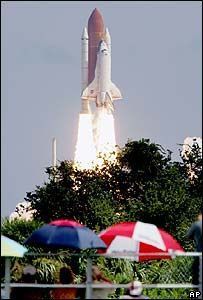 Nine minutes after lift-off Atlantis was in orbit

The shuttle Atlantis has blasted off from Kennedy Space Center in Florida to continue construction of the International Space Station (ISS).
The shuttle soared from its launch pad through a partly cloudy sky at 1115 local time (1515 GMT) and nine minutes later was in orbit around the Earth.
The launch comes after two weeks of frustrating delays for Nasa managers.
Saturday had been Nasa's last opportunity to launch until at least late September.
The shuttle is taking six astronauts to the $100bn ISS to resume construction work after a gap of four years, following the 2003 Columbia shuttle disaster.
As part of new procedures following the Columbia tragedy, Nasa is restricting launches to daylight, to allow for careful scrutiny of the external fuel tank.
Smooth launch
Saturday's launch appeared to go smoothly. Cameras trained on the fuel tank checked for signs of hard foam breaking off - the problem that doomed Columbia - but a preliminary review indicated there was no major foam loss. 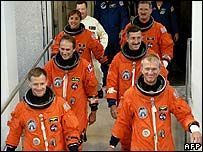 
The fuel cell sensors - which caused one of the launch delays earlier this week - also appeared to be working normally.
The shuttle's twin solid rocket boosters, and later the empty fuel tank, separated from the shuttle and fell back to Earth.
"It looks like your long wait is over," launch director Mike Leinbach told the Atlantis astronauts just before lift-off.
"We wish you all the best luck in the world, Godspeed and we'll see you back here in about two weeks."
"We're ready to get to work," replied Atlantis commander Brent Jett.
Pressure on Nasa
Atlantis was initially set to launch on 27 August, but a lightning strike, tropical storm, and technical glitches saw the launch put off four times.
Saturday was the last opportunity for the mission to launch until at least late September, as it had to avoid clashing with a Russian Soyuz rocket scheduled to visit the ISS on 18 September.

ISS: ORBITING OUTPOST
Construction work has been on hold for four years
16 nations contribute to the ISS, including the US, Russia, Japan, Canada, Brazil and European Space Agency states
The ISS will eventually be the size of a football field


Nasa managers were under pressure to launch as there is a tight schedule of some 15 further shuttle missions to complete construction work on the ISS by 2010, when the current shuttle fleet is due to be retired.
The shuttle's crew will deliver and fit the P3/P4 truss, a 17-tonne segment of the space station's "backbone" that includes a huge set of solar arrays and a giant rotary joint to allow them to track the Sun. The arrays will be the second of four sets, and will span 73m (240ft) when fully extended. Once fitted, they will effectively double the station's current ability to generate power from sunlight.