Home on the moon


On July 21, 1969, we made one giant leap. Man walked on the moon, and the world rejoiced. But, since then, what purpose the moon? We know we can get there and what it looks like, but short of practising our long irons on the most expensive golf range in the galaxy, why would we want to return?

William Burrows knows why: to save mankind. Burrows is the spokesman for the elegantly named Alliance to Rescue Civilisation (ARC), a body of American scientists and thinkers who think the moon is humanity's ultimate insurance policy.

For the ARC, it represents a chance to save a back-up of the blueprint for life on Earth and, in the event of disaster, a few people, too. But is he for real, or is he just another science-fiction nutter?

"Well, I can't vouch for that," says Burrows at his research centre in Stamford, Connecticut. "In fact, at an Air Force base in Omaha, someone asked me whether I wrote fiction or non-fiction. I said, 'That depends on who you ask'."

Despite this self-deprecating manner, Burrows is an authority on the subject. Now professor of journalism and mass communication at New York University, Burrows's early training was as an aviation and space reporter for the New York Times.

From there, he developed into one of the United States' leading space writers. In 1986, his book Deep Black caused a sensation when it exposed America's spy satellite programme. And, in 1999, his history of the first space age, This New Ocean, was shortlisted for the Pulitzer Prize, and has since become the subject's standard work.

In 1999, Burrows and Robert Shapiro, a professor emeritus and senior research scientist in biochemistry at New York University, wrote an essay for Ad Astra, an astronomy journal, which contained the bones of their idea that humanity needs to save a copy of itself to survive. The Alliance to Rescue Civilisation was born.

Since then, Shapiro and Burrows have been joined at the ARC by Ray Erikson, who has worked for Nasa and runs an aerospace firm in Boston, and Steven Wolfe, a Congressional aide who helped to pass the Space Settlement Act of 1988.

So what is their proposition? "The first thing we talked about was the need to back-up our planet, off-planet," says Burrows. That would involve creating a secure lunar colony, where a huge computer hard-drive could sit, containing a complete record of our planet, with an "infinitely adaptable software system", so that the information could be read in perpetuity.

But what should be on the hard-drive? "Everything," says Burrows. "It is a historical record, it is a civilisation record, it is cultural, it is scientific, it is DNA, it's all of it. The good, the bad, the ugly, sparing absolutely nothing."

So who will decide what eventually goes up there?

"It's a good question," says Burrows. "It would be an international committee. But the mandate is 'everything that is of reasonable importance goes up there'. I leave it to them to decide exactly what [is saved], and I wouldn't like to anticipate that."

It is worth noting, at this point, that the ARC is not the only group considering its options for backing-up the planet's DNA. In June this year, for example, the five prime ministers from the Nordic countries met to discuss a "doomsday vault", to store crop seeds in case of catastrophe. Meanwhile, a British group called the Frozen Ark is compiling a genetic bank of DNA samples of endangered species.

Both these storage solutions are hampered, says the ARC, by their reliance on Earth. The same crisis - be it nuclear war or environmental catastrophe - that could render these sites supremely useful could also destroy them. Hence, the ARC wants an off-planet hard drive. And their preference for that site is the moon. "I would say the moon is our best option," says Burrows. "Secondarily, we might be able to use a large space station. But, in no case could we use Mars."

"The moon is a lot more accessible. It's only four days away.

"Conversely, if something horrible happens here, we could get people to the moon pretty fast. I'm all for going to Mars eventually, but it's not the place to start. What we would do is go to the moon and learn from our mistakes."

The second and, perhaps, most ambitious part of the ARC's plan is to colonise the moon with a fledgling human population.

"After we first discussed this, I started to think - why confine this to a storage site on the moon? Why not spread the seed and protect ourselves and get people up there? Our rationale for going to the moon is to spread the population out, so in case something bad happens, you've hedged your bet."

As pie-in-the-sky as this plan sounds, Burrows' idea was mirrored in June by Professor Stephen Hawking, who said that "it is important for the human race to spread out into space for the survival of the species". But how is this grand aim to be achieved? Are there studies that prove that a functioning lunar base, peopled by brave adventurers, could nourish itself?

"Oh God, yes," says Burrows. "There are studies upon studies upon studies ... There was a German gentleman called Peter Eckhart who wrote one of the most convincing papers. Nasa has plans for a moon base and, as far back as the 1950s, the Air Force and the Army had plans to build a base. It is feasible, but it would be very, very expensive.

"I can't give you a ballpark figure. It doesn't exist. It is many billions, many trillions of dollars. It doesn't matter. It's not a number you can come to grips with. With that said, when you think about the war in Iraq - a colossal waste of money, which has turned the budget surplus into the biggest deficit [the US] has ever had - it's a question of where you want to put your priorities."

Undaunted, Burrows and his colleagues are seeking to raise seed funding from philanthropic organisations when they convene a conference this year. But when the sums of money involved are, in Burrows' own words, "silly", what's the point of even starting? And with urgent humanitarian crises crying out for investment, why should charitable bodies pledge anything to a project that may not achieve lift-off?

Burrows says people say, "'Why go into space, when there are people starving in the world?' But I would say this: there's enough money to do both. Science should not be fighting science. You can feed people, you can work on stem-cell research, you can work on Aids, and you can make this moon thing work, too.

"It's intensely rational for us to go up there. I'm not a pessimist, I'm not an optimist. I'm a realist ... This is the home planet, this is our source of nurture. But, as Shapiro says, no skipper goes to sea without a lifeboat."
J

If we destroy our planet will science find a new one?

(Popular Science) -- Scientists are exploiting one of Einstein's predictions to find Earth-like planets around other stars -- planets that might even support Earth-like life. Let the evacuation plans begin!
WHAT: A way to spot Earth-size planets orbiting distant stars. Traditional techniques can't find small, rocky planets. But a new strategy called gravitational micro-lensing uses the bending of light to detect those elusive ersatz Earths. With it, astronomers have already found four new planets. The latest, located in Scorpio, is an icy orb only 5.5 times as massive as Earth -- the smallest exosolar planet spotted orbiting a normal star.
WHY: To determine whether we are alone in the universe. We're much more likely to find life on a rocky planet than on a gas giant like Jupiter -- and if the human race needs to find a new home in the future, rocky exosolar planets will probably be our destination. Also, some scientists theorize that small, solid planets outnumber gas giants (10:1 is a conservative estimate), but until now they couldn't test that hypothesis.
WHERE: All across the globe. A loose network of astronomers point their telescopes at the center of our galaxy, where they can see many stars at once. Because gravitational-microlensing events happen over the course of 10 to 40 days, research teams on different continents record data as dawn -- and the end of viable observation time -- approaches for their cohorts.
WHO: Two international teams of scientists, based in Chile and New Zealand and assisted by hundreds of volunteer astronomers, look for microlensing events across huge swaths of sky. They alert each other of probable events by Web and e-mail.
FAQs
How many planets have been found? Around 200. Most have been spotted by looking for wobbles in a star's motion that are caused by the gravitational attraction of a planet. But since this method preferentially finds huge planets that orbit close to their suns, it's turned up mostly "hot Jupiters."
Are any of them earth-like? Not yet. Microlensing has found four small, solid planets. But they are too far away from their suns --and thus too cold -- to support life. (The Scorpio planet is estimated to be a bitter --364°F.) But future finds may fall within habitable zones of solar systems. If launched in 2012, NASA's proposed Microlensing Planet Finder -- a space telescope designed to census our galaxy -- would have a better chance of detecting planets in this zone.
Have we seen any rocky planets? No. They are too dim to see, even with powerful telescopes.
Can I help in the Planet search? Sure, if you live south of 35 degrees north latitude (Memphis, Tennessee) and own a telescope with a 10-inch aperture equipped with a CCD detector. Readers interested in joining the effort should contact Andrew Gould at gould@astronomy.ohio-state.edu.
J 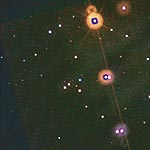 An image of the supernova after the explosion 440 million light years away in the constellation Aries. (SDSS/NASA)

Satellite records death of a star

Astronomers say they have recorded a supernova - the death explosion of a massive star, typically only ever spotted days after the blast.
In studies published in the British journal Nature, four international teams of astronomers say the extraordinary blast was preceded by a short, sharp burst of gamma rays.
They say the recording provides the first confirmation of a theory that supernovae follow an early warning signal of this kind.
Supernovae occur when a huge, mature star runs out of fuel and catastrophically and explosively collapses in on itself.
The edge of a blast - called the shock break-out - is a wave of energy that ranges across the frequency spectrum.
On February 18 this year, the orbiting NASA telescope Swift picked up a gamma-ray burst (GRB) in a star-forming galaxy about 440 million light years away, towards the constellation of Aries.
As it swivelled in the direction of the blast, Swift also relayed its discovery to major ground-based and space-based observatories.
The combined data from their sensors has been pieced together to give a picture about what happened over the next 17 days.
GRBs have long been associated with the aftermath of supernovae.
J

In the event of an emergency...store blueprints on the moon

On 21 July 1969, we made one giant leap. Man walked on the moon, and, as one, America and the world rejoiced. But, since then, what purpose the moon? We know we can get there and what it looks like, but short of practising our long irons on the most expensive golf range in the galaxy, why would we want to go back?
William Burrows knows why: to save mankind. Burrows is the spokesman for the elegantly named Alliance to Rescue Civilization (ARC), a body of American scientists and thinkers who think the moon is humanity's ultimate insurance policy. For the ARC, it represents a chance to save a back-up of the blueprint for life on Earth and, in the event of disaster, a few people, too. But is he for real, or is he just another science-fiction nutter?