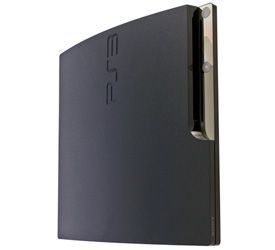 To the casual observer, there's nothing particularly slim about the new Sony PlayStation 3's ($299.99 direct) sleek black housing—it's only when you compare it with its nearly three-year-old counterpart, the previous-gen PS3, that you see how much smaller it is. The bigger news here, however, is the $100 price drop; the original PS3 retailed for $600 when it launched in 2006, and up until last week, the least-expensive PS3 you could buy was $400—and that was for a console with an 80GB hard drive. A more-reasonable $300 now buys you an incredible gaming device that's more compact, sports a roomier 120GB hard drive, and is one of the best Blu-ray players you can find.

In general, the new PlayStation 3 offers a near-identical experience to the previous-generation console, which, incidentally, is still available, but for $100 less. It's also $299.99, but with the larger case and a smaller hard drive (80GB), it's hard to see why anyone would opt for it over the PS3 slim. (At $399.99, the existing 160GB version is also $100 cheaper.) Major features haven't changed much, and if your PS3 is hidden behind a cabinet door, you probably won't be able to tell the difference.
Much of the hardware is unchanged—the device still features a 3.2-GHz cell processor (though sized down from 65nm to 45nm), 550-GHz nVidia graphics, and the RSX Reality Synthesizer GPU—but Sony completely redesigned the power supply unit and cooling mechanism, resulting in a more efficient PS3 that runs cooler. With the original PS3, Sony found the right combination of hardware for outstanding gameplay, so it makes more sense to refine the current technology than to start from scratch with entirely new components. Although there's more to the new PS3 than just a slimmer design and a lower price, there is little reason for current PS3 owners to upgrade.
View Slideshow See all (8) slides


Size, Connectivity, and Energy Efficiency
The previous-gen PS3 is a glossy black behemoth, weighing 9.5 pounds, measuring 3.9 by 10.7 by 12.7 inches (HWD), and taking up more than its fair share of space in the entertainment center. Sony trimmed the new console down to a much more palatable 2.5 by 11.4 by 11.4 inches and 6.7 pounds, so it's easier to stash in smaller spaces. The new PS3 also includes a 120GB 2.5-inch (notebook-size) hard drive. Like with the previous model, swapping in a new drive takes minutes, thanks to its easy accessibility beneath the slot-loaded Blu-ray drive.

Buzz up!on Yahoo!​
As far as connectivity, the new console includes the same ports and options. Both PlayStations include a pair of front-mounted USB ports (for charging the included DualShock 3 controller), and Ethernet, HDMI, optical digital audio output (SPDIF), and a proprietary AV port on the back of the unit. Like the original model, the new PS3 offers an HDMI port with support for 1080p, but Sony leaves out the HDMI cable, with out-of-the-box connectivity limited to composite video and audio out. There's also integrated 802.11b/g Wi-Fi, and in my tests, connecting to wireless networks was a breeze. Like the previous model, the Slim lacks the memory card slots found on the original PS3, though there are other ways to share content with the console. You can stream from other devices on the same network, for example (more on this later).
Sony not only shrunk the PS3's internal components to fit into the slimmer housing, but energy efficiency is also improved. Using a Kill-A-Watt meter to measure power consumption, the new PS3 used 71 watts during Blu-ray movie playback, while the older model consumed 104 watts, making the newer model 32 percent more efficient. To compare, a 42-inch LG LED HDTV consumed about 140 watts while playing back the same scene. It's not clear exactly what Sony did to increase efficiency, though both models took roughly 17 seconds to boot, and performance felt identical. —next: Media Features

whats the price of it???