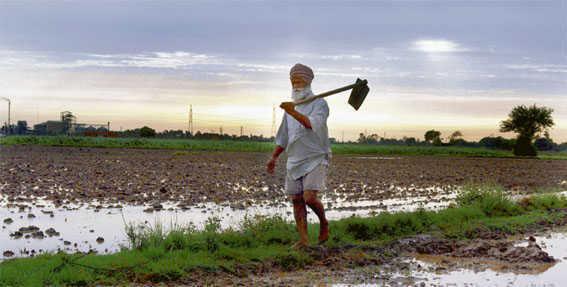 A sub-group set up by the Punjab Government has recommended Provident Fund and a pension scheme for small and marginal farmers owning land up to 5 acres as well as for landless farm workers aged above 60.
Farmers too will have to contribute towards the Provident Fund, that will have monthly slabs ranging from Rs 2,500 to Rs 6,000, depending on the farmer’s contribution. There are 3.58 lakh farmers in Punjab with landholdings up to 5 acres and 12 lakh landless labourers.
Now that the sub-group has submitted its report to the State Governance Reforms Commission, a meeting of the top brass will be held on Monday to work out the implementation process.
Chairman of the Farmers Commission GS Kalkat, PAU Vice Chancellor Dr BS Dhillon, officials of the banking sector and those from the Finance Department are among those invited, said Chief Secretary Sarvesh Kaushal.
With the agricultural crisis worsening and Assembly elections round the corner, Chief Minister Parkash Singh Badal wants to address the farmers’ concerns on priority. Three universities have been asked to conduct a survey to ascertain the exact number of suicide cases.
Chairman of the Mandi Board Ajmer Singh Lakhowal said the board would willingly contribute towards the pension fund for farmers but the major contribution would be that of the government’s. Balbir Singh Rajewal of BKU said he had made several representations for a pension scheme for farmers.
Prof Pramod Kumar, chairperson of Punjab Governance Reforms Commission, had submitted reports on the agrarian crisis in 1996 and 2006 on helping farmers, suggesting Provident Fund.
You must log in or register to reply here.
Similar threads
Punjab News Security tools in Punjab jails obsolete, says reform panel
Punjab cm on hindi panel
Punjab News Punjab ਆਉਂਦਿਆਂ ਹੀ Priyanka ਦਾ Modi 'ਤੇ ਪਹਿਲਾ ਹਮਲਾ
Punjab News Navjot Sidhu ਕਿਉਂ ਨਹੀਂ ਆ ਰਹੇ Punjab, ਜਾਣੋ ਕਾਰਣ
Punjab News Punjab ਦੇ ਚੋਣ ਮੈਦਾਨ ਵਿਚ 7 Woman, ਦਾਅ 'ਤੇ ਲੱਗੀ ਕਿਸਮਤ
Share:
Facebook Twitter Pinterest WhatsApp Link
Top