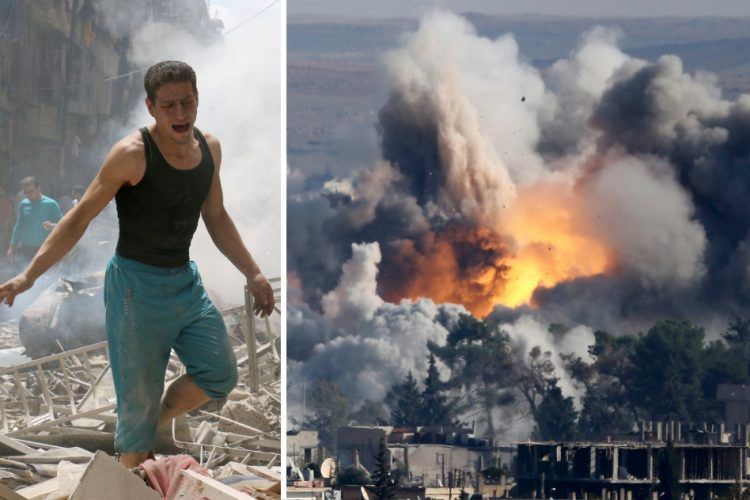 The incident took place in the town of Manbij on Tuesday. Around eight families were struck while they were trying to escape the attack launched by Arab and Kurdish forces against Islamic State (IS) group fighters in Manbij. 85 civilians, including 11 children have been killed, according to the statement of the Britain-based Syrian Observatory for Human Rights. Besides, dozens were wounded.

The Local Coordination Committees, an activist group stated that dozens of civilians, mainly families, were killed, while the ISIS-linked Aamaq news agency pegged the casualty at 160 civilians, mostly women and children in Tokhar. They also claimed that the killings happened due to a series of air strikes conducted by the USA around Tuesday dawn. Since the region is impenetrable by independent media, the exact number of toll taken could not be ascertained.

ISIL controls the village of Tokhar near Manbij on the northern skirt of Syria. When pictures of the air aftermath emerged on social media like Facebook, dead bodies of children as young as three were shown under piles of debris.

Syrian Observatory for Human Rights opined that the strikes may have been a result of an error made by the US jets. The military personnel may have mistaken the civilians for ISIS militants.

Since the US-backed Syria Democratic Forces (SDF) started advancing towards Manbij, an ISIS stronghold, under the cover of intense air-strikes by the US in May, the surrounding area has been witnessing the extremists and SDF at loggerheads with each other. SDF is an alliance of Kurdish and Arab fighters. More than 450 air-strikes have been believed to be carried out around the city since then in an effort to recapture the last territory where the ISIS holds sway. It is situated on the frontier with Turkey.

Manbij is considered to be strategically located as it is 30 minutes from the Turkish border and on the supply route to Raqqa which is regarded to be the capital of the self-proclaimed Caliphate. Moreover, the Western fighters have been using the city as a base during their journey into Syria from Europe through the porous northern border. Hence, recapturing this geo-spatially important territory would thus be a landmark victory against the ISIS forces yet. It would be the biggest strategic defeat for ISIS in Syria since July, 2015, when Tal Abyad was taken over by the coalition forces.

However, the advance towards Manbij city has been slow. It has been obstructed by landmines which litter the road and by snipers targeting the SDF troops. On Tuesday, one of the headquarters of the militants was taken over. It was based in a hospital which was being used as a command centre and logistics hub. Still, the city is ridden by the ISIS militants even now. They have been successfully preventing the civilians from escaping the ISIS stronghold. Instead the civilians are being used as human shields.

There were coalition air strikes in Manbij on Sunday, too, which killed six civilians, including “a woman with four children and an old man”, as stated by the Observatory. On Monday, there were 18 strikes which destroyed 13 ISI fighting positions, seven ISIS vehicles and two car bombs near the city of Manbij, according to the US Central Command.

Although the US sir strike has been deadly, the Russian bombings have been regarded as even more indiscriminate in their targets according to the rebels and residents of Syria alike. Although Moscow has been denying this, the locals claim that the Russian bombings have deliberately destroyed hospitals, schools and infrastructure in the areas held by opposition.​
You must log in or register to reply here.
Share:
Facebook Twitter Pinterest WhatsApp Link
Top