Two key arrests in Mumbai blasts
Mumbai, July 25
The Mumbai police has arrested two key persons in connection with the Mumbai blasts. They have been identified as Suhail Sheikh and Jameer Ahmed. According to the police, both of them were members of a cell belonging to the Lashkar-e-Toiba. Sheikh is said to be a graduate from Pune while Jameer owns a small shop at Nagpada in central Mumbai.
J 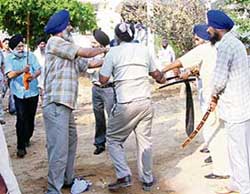 SGPC meeting ends in fisticuffs
Our Correspondent ​
Patiala, July 25
Fracas erupted at an SGPC executive meeting held at Gurdwara Dukhniwaran Sahib here today with members openly coming to fisticuffs. The police intervened to pacify the agitated members, many of whom lost their turbans in the melee.
The trouble broke out when a section of the gathering started raising slogans against SGPC chief Avtar Singh at the venue. The SGPC task force too joined the free-for-all. According to eyewitness reports, the task force beat up members owing allegiance to the Akhand Kirtani Jatha and the Guru Granth Sahib Mission Committee.
A delegation of Sikhs from Kaki village wanted to meet Mr Avtar Singh but some members of the task force blocked their way. Following this they started raising slogans against the SGPC chief. Outnumbered by the task force and other Akali workers, the delegation members beat a hasty retreat but not before being roughed up by the task force members.
Turbans tossed around in the melee while many members of the delegation could be seen soaked in blood. A police party from the Tripuri police station reached the venue and brought the situation under control.

British girls come to launch music album Chandigarh, July 25
They insist they are different like so many before them, but this singing duo of 'Nic 'n' Nicole' is unusual, for these two girls have come all the way from their homes in England to launch their debut music album, 'Aaja Pyar Kar Le' in India. That is not all, Devinder Kaur alias Nic, although born and brought up in England, has Punjabi roots, while Nicole is a self-professed 'Indiaphile'.
Singing duo 'Nic 'n' Nicole' in Chandigarh on Tuesday. — Tribune photo by Vinay Malik 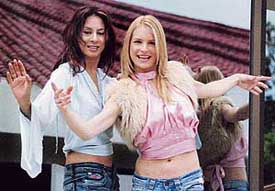 
Israeli Prime Minister Ehud Olmert says a comprehensive investigation will be carried out into the deaths of UN observers in an Israeli air strike, as nine Israeli soldiers were hit in heavy fighting with Hezbollah fighters.
J 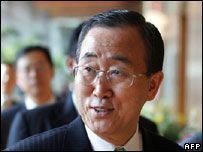 Hopes are fading that an Asean summit in Malaysia can kick-start negotiations on the North Korean nuclear stand-off.
Ministers from all six nations involved in talks on the North's nuclear aims will be at the meeting later this week, but officials say progress is unlikely.
Another issue dominating the meeting is Burma. Critics say a statement by delegates voicing concern over the situation is not strong enough.
The US and EU want Asean to pressure Burma into improving its democracy.
Since North Korea test-fired a number of missiles earlier this month, the need to address its nuclear ambitions has taken on an added urgency. 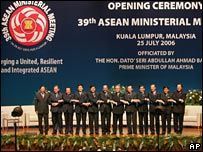 Asean ministers are meeting in the Malaysian capital, Kuala Lumpur

Both American Secretary of State Condoleezza Rice and North Korean Foreign Minister Paek Nam-sun are expected in Kuala Lumpur on Thursday.
Together with ministers from Japan, Russia, China and South Korea, they will represent all six countries involved in the stalled talks.
"We agreed that it's necessary for the participants of the six-party talks to meet in a six-way or other formats on the sidelines of" the Asean regional forum conference, South Korean Foreign Minister Ban Ki-moon told reporters on Wednesday.
But the Malaysian hosts say North Korea has already signalled its unwillingness to restart the stalled talks this week, and a senior Chinese official told reporters that Beijing sees no reason for the other five countries involved to meet if North Korea refuses to participate.
'Strong message'
Meanwhile the Malaysian foreign minister has said that Tuesday's closed door meeting of Asean foreign ministers privately sent a "very strong message" to Burma urging democratic reform.
Asean has been repeatedly criticised for failing to take a tougher line against Burma - one of its 10 member nations - over the lack of democracy and continued house arrest of opposition leader Aung San Suu Kyi.
International observers were disappointed at the group's statement on Tuesday, which only called on Rangoon to show "tangible progress" . Mr Syed Hamid said the statement may have appeared weak because it had to reflect "a compromised position in order to be acceptable to all". But he added: "Individually, when we were having discussions, we sent a very strong signal that unless they change the pressure is going to continue and this is not good for Asean".

Beijing - Typhoon Kaemi struck the south-eastern coast of China on Tuesday, sparking the evacuation of over 700 000 people in an area still reeling from a tropical storm that claimed more than 600 lives.

State television showed footage of torrential rains lashing Fuzhou, a major city in Fujian, as workers struggled to fasten power cables and make other preparations for the onslaught of the typhoon.

With the storm packing winds of up to 120km/h as it approached, more than 643 000 people were evacuated from Fujian, Xinhua said, while another 80 000 were moved from their homes in neighbouring Zhejiang province.
J

The cluster of lakes was spotted near Titan's frigid north pole during a weekend flyby by the international Cassini spacecraft, which flew within 590 miles of the moon.
Researchers counted about a dozen lakes six to 62 miles wide. Some, which appeared as dark patches in radar images, were connected by channels, while others had tributaries flowing into them. Several were dried up, but the ones that contained liquid were most likely a mix of methane and ethane.
"It was a real potpourri," said Cassini scientist Jonathan Lunine of the University of Arizona.
Titan is one of two moons in the solar system known to possess a significant atmosphere similar to that of primordial Earth. But scientists have long puzzled over the source of its hazy atmosphere rich in nitrogen and methane.
Scientists believe methane gas breaks up in Titan's atmosphere and forms smog clouds that rain methane down to the surface. But the source of methane inside the moon, which releases the gas into the atmosphere, is still unknown, Lunine said.
Last year, Cassini found what appeared to be a liquid hydrocarbon lake about the size of Lake Ontario on Titan's south pole. But the recent flyby marked the first time the spacecraft spied a multitude of lakes.
Cassini's next Titan encounter will be Sept. 7, when it will be 620 miles away.
Cassini, funded by NASA and the European and Italian space agencies, was launched in 1997 and took seven years to reach Saturn to explore the ringed planet and its many moons. The mission is managed by NASA's Jet Propulsion Laboratory in Pasadena. Cassini's accompanying probe, Huygens, developed and controlled by the ESA, touched down on Titan in 2005.[/FONT]
J

http://article.wn.com/link/WNATd4a05f521a433c8f3acd8e9758518da5?source=upge&template=worldnews/displayarticle.txt
Heat wave kills 40 in France
PARIS, July 25: Around 40 people in France, mostly elderly, have died in a heatwave over the past week and the Netherlands is poised to record its hottest July since records began.

Meteo France, the national weather agency, has put its heatwave alert at orange, the second highest level, in 53 of the 96 metropolitan departments, or administrative districts.

A top French health advisory body (INVS) said it would publish on Thursday a detailed toll from the heatwave which has so far proved less deadly than the 2003 hot spell which killed some 15,000 people.

Further north, the Dutch meteorological institute KNMI said July was on track to be the hottest month in the Netherlands since temperatures were first measured in 1706.
You must log in or register to reply here.
Similar threads