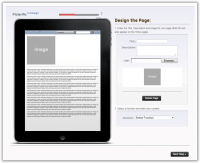 iBuildApp is a free service on the Internet which will let you create, test, track and update your own applications for iPad for sale in the Apple store.


iBuildApp is a great new mobile applications publishing website, which will allow everyone to build their own apps for Apple’s iPad.

This simple Internet service offers you an easy and inexpensive way to create, test, track and update created applications that are promised to support text, RSS feeds, pictures, audio, video, and the list goes on and on.

Everyone is invited to build a free Apple iPad app for any purpose they want – whether it is for business, family, or friends. The process of creating an app is simplified as much as it only can be, and usually takes mere minutes to complete.

Although the service is currently free to use, it will demand you to pay $199 when you ask iBuildApp to handle the hassle of submitting your creation to the Apple store for you. The developers of the service offer Internet users to help them create their own Apple Developer account. After this, the service will take care of the rest activities connected to the app promotion: from Distribution Certificate to provisioning and even building of the users’ applications. The users are also provided with the chance to preview applications on their own Apple device with test builds. However, this requires the users to provide the system with their iPhone ID.

Those who have already tried iBuildApp note that the service is very interesting at the very least. Most of the testers have managed to create their first application less than in a quarter an hour from start to finish, which is quite a time. Try it and see – maybe you will be the one who creates apps the whole world is waiting for!
You must log in or register to reply here.
Share:
Facebook Twitter Pinterest WhatsApp Share Link
Top