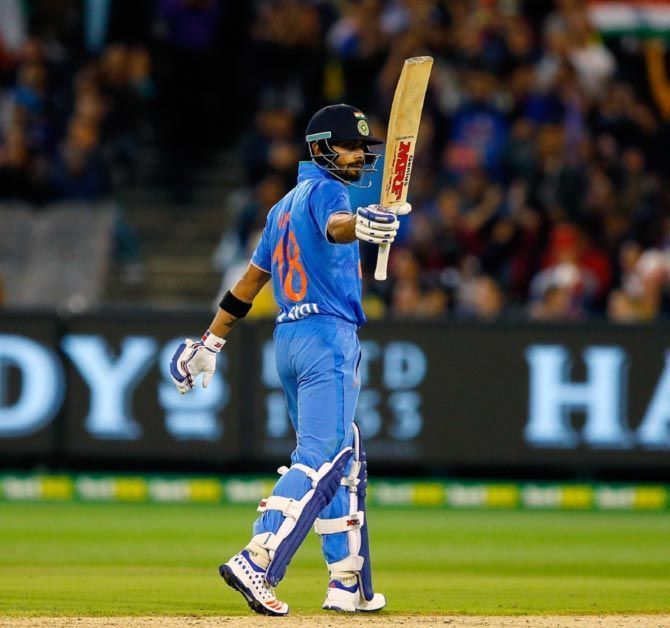 India turned in a fine all-round show to beat Australia by 27 runs in the second Twenty20 International and take an unassailable 2-0 lead in the three-match series at the Melbourne Cricket Ground, on Friday.


Put in to bat, the visitors, who were comprehensively beaten 4-1 in the ODI series that preceded the T20s, put up a record 184 for 3, the highest by any team at the venue in Twenty20 Internationals, and dismissed the hosts for 157 for 8.

The concluding match of the series will be played in Sydney on Sunday.

This is India's first bilateral series triumph Down Under. They earlier won a tri-series in 2007-08 and the Benson and Hedges World Championship in 1985.

Earlier, Rohit Sharma and Virat Kohli smashed their way to a half-century each in India's huge total.

The two in-form batsmen continued with their blazing, Rohit scoring a fluent 60 off 47 balls and Kohli a scintillating 59 not out off only 33.

Rohit's innings was studded with five fours and two sixes, while Kohli hit seven fours and a six.

Rohit and his opening partner Shikhar Dhawan (42 off 32 balls) got off to a slow start after Shane Watson (0-17) and Andrew Tye (1-28) opening the proceedings for Australia.

Aaron Finch made a lot of bowling changes initially in a bid to try a bit of mix and match and it worked as only 12 runs came off the first three overs.

But the two batsmen opened up thereafter and played shots all over the park as the run-rate shot up.

Despite the slow start, India brought up the 50-mark in the sixth over. They continued to push on and closed up on the 100-mark in the 11th over, when Dhawan was caught trying to reverse-sweep Glenn Maxwell (1-17).

It didn’t stop Rohit, though, and he brought up his eighth T20I fifty off 37 balls in the next over. 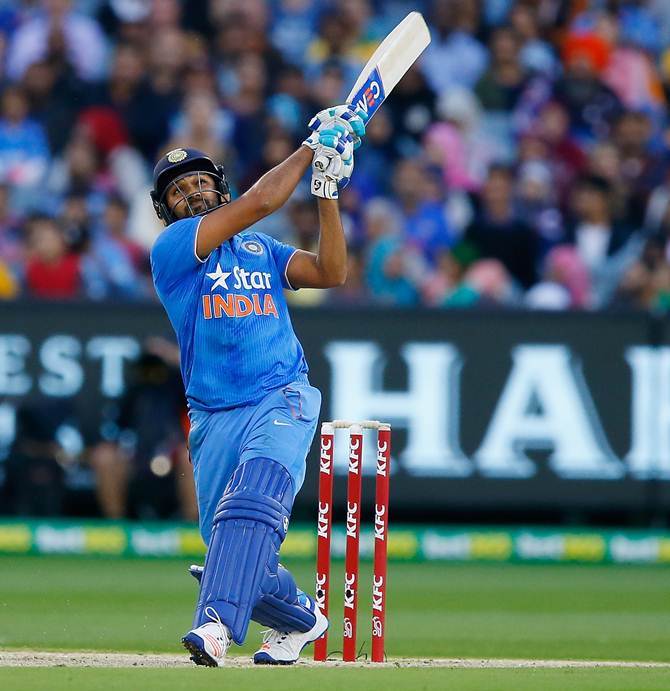 At the other end, Kohli started off from where he left in Adelaide, up and running in no time. He took the onus of scoring on himself, and hit John Hastings (0-35) for three boundaries in the 13th over, the bowler suffering throughout the innings.

But, against the run of play, Rohit was run-out in the 16th over, as Kohli refused a second run after hitting the ball to the deep.

India were 143 for 2 at the end of the 16th over then, as skipper Mahendra Singh Dhoni (14) walked in to provide the final flourish. 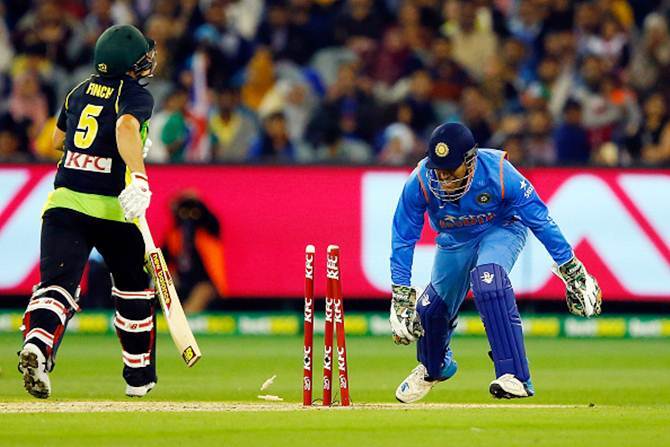 The two batsmen upped the ante further, as the run-rate did not drop below the nine-per-over mark, adding 38 runs off just 22 balls and taking the score past the par-score on a relatively slower wicket than Adelaide.

In the meantime, Kohli completed his 11th T20I fifty off only 29 balls, in the 20th over; it was his second successive fifty of the series and sixth 50-plus score in seven innings on this tour.

Ten runs came off the last over, and 41 off the last four, as Dhoni was caught at long-off off Tye with India coasting to a big score.

Suresh Raina (0) was the unbeaten batsman, while Scott Boland (0-30), James Faulkner (0-35) and Nathan Lyon (0-15) were the other bowlers Australia utilised.

Ashish Nehra (0-34) and Jasprit Bumrah (2-37) opened India’s bowling, but instead of rotating the bowlers at the beginning like in Adelaide, the two were persisted with for the first six overs.

They bled runs as the 50-mark came up for Australia off 31 balls. As soon as the power play wad over though, Ravindra Jadeja (2-32) was brought into the attack and things started happening, though not in India's favour. Mahendra Singh Dhoni missed a regulation stumping of Marsh, while at the other end Finch completed his sixth T20I fifty off just 27 balls, bringing it up with a six off Ravichandran Ashwin (1-27).

The bowlers continued to suffer and the only bright spark was when Hardik Pandya finally caught Marsh at long-on.

It was also perhaps the turning point. The all-rounder removed Chris Lynn (2) in the next over, caught behind.

Yuvraj Singh (1-7) had Glenn Maxwell (1) stumped in the 12th over, Dhoni not missing this time.

While the 100-mark came up for Australia, Shane Watson (15) looked like staying at the wicket and giving support to Finch, who continued hitting big as he was suffering from a hamstring problem.

The duo added 20 runs and were looking to calm things down before Jadeja took a stunning reflex return catch off Watson in the 15th over.

The match then swung India's way when Finch was run-out off a superb throw from Jadeja again at extra cover; Australia’s skipper was just short as Dhoni disturbed the bails.

It was an uphill task thereafter, with 61 runs still needed, and wickets continuing to fall at regular intervals.

Jadeja was again in the mix, with James Faulkner (10) stumped in the 17th over, and the equation stood at an improbable 40 off the last 12 balls.

The 150-mark came up in the 19th over, but the hosts finished well short of the target once again.​
You must log in or register to reply here.
Similar threads