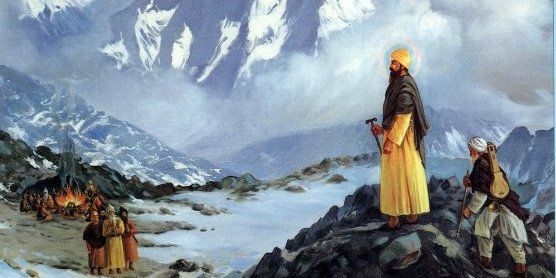 The third time Guru Nanak Dev Ji left home on his famous Udasis (journeys) 0in 1516 he trekked towards the north. He was accompanied by his long time companion Mardana Ji. Guru Nanak Ji's first halt was at Srinagar. At Srinagar, Guru Nanak Ji met a Muslim dervish known as Kamal, and a Hindu pundit called Braham Das. It is said that Braham Das was a very arrogant man. Wherever he went, he was followed by three camels carrying the ancient works he had studied. He was fond of entering into lengthy arguments with the holy men he encountered.


When he met Guru Nanak Ji, in the first instance, he objected to his dress. Guru Nanak happened to be wearing leather shoes and a fur robe for protection against the Kashmir cold. The Guru ignored it. Braham Das then started displaying his learning and asked Guru Nanak Ji about the creation of the world. Guru Nanak's reply was most revealing:


For countless ages there was utter darkness;
No earth, no sky, only God's will.
No day, no night, neither the Moon nor the Sun.
He sat in trance in the void.
There was no eating, no speaking.
There was no water, no air,
No creation, no destruction,
No coming, no going,
There were no planets, no underworld,
None of the seven seas
With rivers flowing into them.
There were no planes: higher, middle or lower,
Neither hell nor heaven, nor any hour of death,
No suffering, no bliss,
No birth, no death,
No entry, no exit.
There was no Brahma, no Vishnu, no Shiva.


With His order, the world was created.
It is maintained without any support.
He created Brahma, Vishnu and Shiva.
He created also the love of Maya.
Only a few are blessed with His Word.
He watches and rules over all.
He brought about the planets, the hemisphere
And the underworld.
And became Himself manifest.
It is the True Guru alone who imparts this
Understanding.
Says Nanak those who are truthful live in
Eternal bliss.
They are blessed with recitation of God's Name. MARU (1035)
​

Hearing this, Pandit Braham Das was stunned. He was amazed at Guru Nanak Dev Ji's vision. He became Guru Ji's disciple and decided to propagate the Word of God. Braham Das stayed in the valley and Kamal and was advised by Guru Nanak to settle in Kurram from where he propagated the Holy Word in Kabul, Kandahar in Afganistan.
Leaving Srinagar, Guru Nanak penetrated the Himalayas and travelled towards Tibet.


When he arrived at Lake Manasarovar, he came across a large number of Yogis who had escaped from oppression and chaos in the plains and had found shelter in faraway caves in the mountains. The ascetics asked Guru Nanak Ji about the conditions prevailing in the country below. Guru Nanak chided them for running away from the hard realities of life the way they had done.

Guru Nanak is well respected by Tibetan Buddhists who consider him a saint. 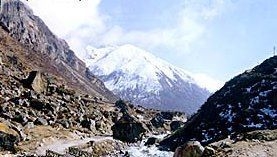 The Chopta Valley is at an altitude of 13,200ft. It has breathtaking alpine scenery with lofty snow capped peaks, meandering rivers and alpine flowers that bloom in June-July. It is about 20mins drive from Thangu. Gurudongmar Lake is a holy lake at an altitude of over 18,000ft, it is beyond Chopta and armed with a special permit it is possible to visit it. A Gurdwara here commemorates Guru Nanak Dev Ji's visit and is one of the holiest Sikh pilgrim shrines in the Himalayas.
Situated past the Chopta valley Guru Dongmar is a lake at a height of 18,000 feet alongside a glacial peak known by the same name. Guru Nanak visited the place during his third udasi in order to solace the Karmapa Nyingmapa sects then being hounded out from Tibet by the Gelugpa sect. These sects had fled from Tibet to the Himalayan belt of Northern India. Many from the Karmapa Nyingmapa sect were the followers of Guru Nanak, as their Head Lamas became Guru Nanak's followers in Kailash Mansarovar area after being impressed by Guru Nanak's discussions with the famous Sidhas of the age. 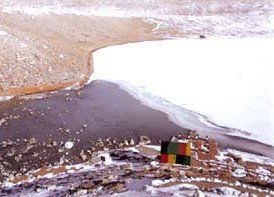 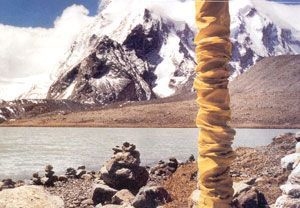 According to a legend some local people approached Guru Ji with an appeal for help. The lake remained frozen during most of the year and rendered it incapable as a source of water. Guru Nanak Dev Ji is said to have touched the lake and it has never frozen since. Guru Nanak's footprints, a robe and a water-carrying utensil are preserved in a nearby place called Lachen Gompha. Here the locals refer to Guru Ji as Rimpoche Nanak Guru who on his way to Tibet had rested there.
Some grazers projected another problem to Guru Nanak Ji. Due to the effect of altitude, their virility was affected. They requested the Guru to do something about it. Guru Nanak blessed the lake, saying," Whosoever takes the water of this lake will gain virility and strength and will be blessed with children." The people of the area have firm faith in Guru's words and consider the water of the lake as nectar. A Gurdwara was constructed in eighties to commemorate Guru Nanak's visit to the place
A story they tell is that Guru Ji had brought with him a rice meal packed in banana leaves, as is the custom even today in banana growing areas. The two commodities were unknown to the hill folks. Guru Ji having noticed their inquisitiveness bestowed them with a share of this strange cereal. They displayed forethought andinstead of eating it sprinkled the rice over the meadow and buried the banana packing in a corner. Today the village harvests a rich crop of rice and bananas 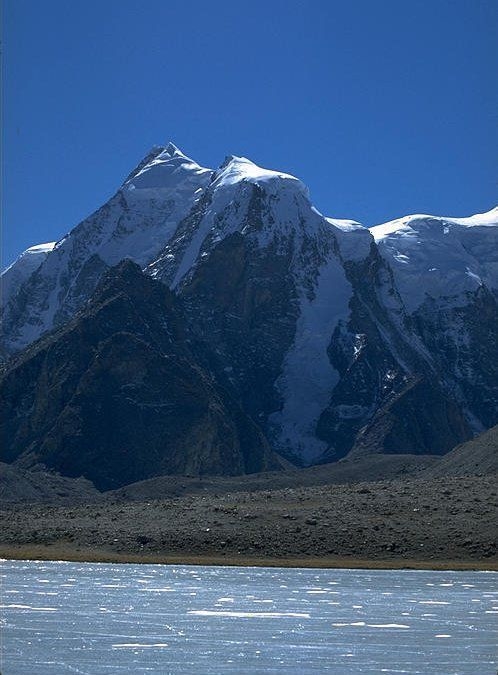 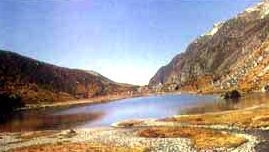 The local people of the area and Lamas of Karmapa Nyingmapa Sect confirm Guru Nanak's visit to these areas. The Lamas from these areas have been visiting Golden Temple, Amritsar, regularly to pay obeisance to their beloved Guru Rimpoche, Guru Nanak, also known as Nanak Lama in their areas. Guru Nanak's footprints, a robe and a water-carrying utensil (kamandal) are preserved in Lachen Gompha, Sikkim, commemorating his visit to the place. Records show that during his journeys to the Himalayas and the Far East, including China, Guru Nanak visited all these states around 1516 AD. This itinerary is found recorded in Janam Sakhee Bhai Bala; Janam Sakhee Walait Wali; Janam Sakhee Meharban; Janam Sakhee ; Suchak Parsang by Bhai Behlo; Mahima Parkash by Baba Sarup Chand; Parchian Sewa Das; Nanak Prakash by Bhai Santokh Singh;