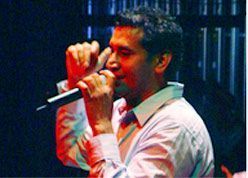 
Panchkula (Punjab): Punjabi pop singers have been making news off-lately and that too for all the wrong reasons. The recent spat over a smooch between Punjabi pop sensation Mika and Rakhi Sawant raised a few eyebrows and left many wondering if the entire episode was a well planned publicity stunt.
This time its Punjabi pop singer Gursewak Mann, who got arrested by the Haryana Police on Tuesday for allegedly molesting a girl and clicking pictures outside the ladies loo in a hotel.
Mann whose brother Harbhajan Mann, is a more known face in the Punjabi films and music industry, allegedly clicked the girls’ photographs outside the women's toilet in the North Park hotel of Panchkula on Saturday night. Mann and his friend, whose identity is not known and is yet to be traced by the police, were booked by the police for outraging the modesty of a woman.
The hotel's discotheque had opened last week and the girl (the complainant) had gone there with a friend when the alleged incident occurred. She said that when she was coming out of the toilet, Mann's friend took photos with the singer's mobile phone camera. When she objected, the duo erupted into a scuffle.
Mann, however, told police on Sunday that his friend was photographing him in the corridor of the hotel where the toilets were located. He said the toilet's door was open and the two were not even aware if there was someone stepping out while they were clicking pictures.
On the complaint of the girl, police raided Mann's Mohali residence in Punjab on Monday. Police investigations also revealed that after conducting the medical examination, the girl (complainant) was found to be under the influence of alcohol.

after reading this piece of news, I surely believe that this was a non-sense act on the part of the girl

First she told inside the toilet, now outside?? the girl herself is :

, moreover she was drunk...