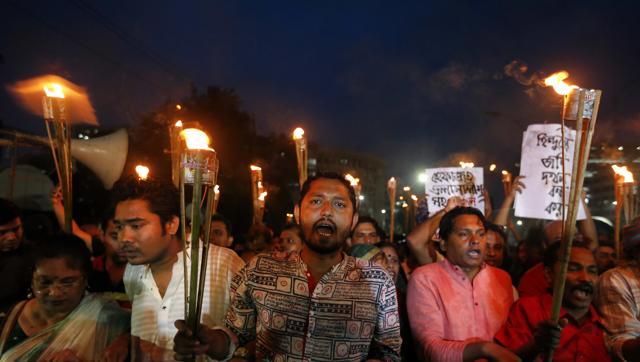 In fresh attacks on Hindus in Bangladesh, unidentified miscreants set ablaze some of their houses and damaged two temples in central Brahmanbarhia district where several places of worship of the minority community were vandalised earlier this week, police said.

Miscreants set fire at least six Hindu houses in a predawn attack yesterday in central Brahmanbarhia district’s Nasirnagar, the place where at least fifteen temples and more than 20 houses were vandalised after a Facebook post deemed offensive to Islam sparked outrage in the country.
“They (miscreants) fled the scene immediately after torching the houses and two small temples were also damaged,” a police officer told PTI.
Many Hindu families have deserted their houses after the attacks on temples and have taken refuge in other areas.
Tensions have escalated in the neighbourhood after the fresh assault yesterday.
Police in overnight drives detained 33 persons for their alleged involvement in the synchronised attacks on Hindus in Brahmanbaria on October 30.
With this, police has detained a total of 44 people in connection with the attack, Mizanur Rahman, superintendent of Brahmanbaria police, told The Daily Star.
Meanwhile, hundreds of protesters yesterday rallied in the capital demanding stern action against perpetrators of attacks on Hindus.
Several hundred Hindu youths joined by Muslims staged a street protest at central Dhaka’s Shahbagh Square.
Several political and rights groups also held another rally in front of the National Press Club demanding immediate and stern actions against the culprits.
The protesters at Shahbagh area enforced a blockade on the busy streets around the area for more than half an hour and forced ruling Awami League’s joint general secretary Mahbul Alam Hanif to get out of his car, stuck in barricade, and express solidarity with them.
The protesters also demanded resignation of a minister who had earlier accused journalists of “exaggerating” the Nasirnagar attacks.
“(Livestock) Minister Sayedul Haque was in the area just few days after the (Sunday) attacks while a fresh attack took place after he visited the scene,” general secretary of Bangladesh Puja Celebrations Committee said.
The protests yesterday prompted newly elected Awami League general secretary and Road Transport Minister Obaidul Quader to reiterate the government’s tougher stance against the culprits promising to bring them to justice quickly.
“Stern punitive actions await the attackers as (Prime Minister) Sheikh Hasina-led government has taken a tough position to this end,” he said at a function of ethnic minority community in Dhaka.
He urged the Hindus not to consider themselves as a minority group and said “the government is with you”
You must log in or register to reply here.
Similar threads
Fresh attack on ship carrying Indians
Pakistan supporting Sikh militants, say fresh intelligence inputs
[Watch] This Is How Stale Vegetables Are Made To Look Fresh So That Those Get Sold Easily
Two protesters killed in fresh firing
HC seeks fresh status report
Share:
Facebook Twitter Pinterest WhatsApp Link
Top