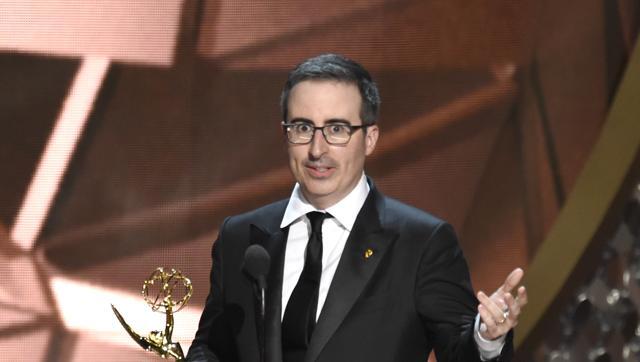 Fantasy drama series Game of Thrones and comedy Veep won the top Emmys for a second straight year on Sunday, fending off challenges from newcomers.
Game of Thrones, which went into Sunday’s show with a leading 23 nominations, won a total of 12 Emmys, including for directing and writing. It also bagged the award for Best Drama series.
John Oliver captured the best variety talk series award for Last Week Tonight with John Oliver, besting competitors including Jerry Seinfeld and host Jimmy Kimmel — who received barbed consolation on stage from Matt Damon, his longtime faux nemesis. The loss “makes a lot of sense,” Damon said.

Maggie Smith was honoured as best supporting actress in a drama series for the final season of Downton Abbey. It was her third win for playing the formidable dowager. As became her custom, she didn’t attend the ceremony.
Ben Mendelsohn of Bloodline won as best supporting drama actor and also was a no-show.
Tatiana Maslany is the Emmy Award winner for best actress in a drama series for her role in Orphan Black. It is the first Emmy win for Maslany, who plays multiple characters in the BBC America series. All of her characters are clones with distinct personalities and lives. Maslany has drawn praise for her versatility in playing the roles, which range from suburban mom to ruthless assassin, during the show’s four seasons.
Jeffrey Tambor captured his second consecutive best comedy actor trophy for Transparent, in which he plays a transgender character. He called for Hollywood to make him the last non-transgender actor to get such a role. 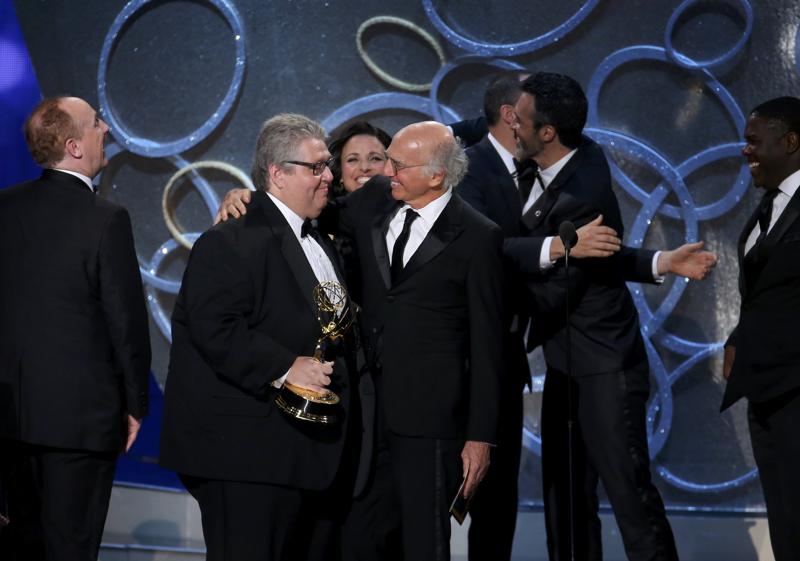 Julia Louis-Dreyfus of Veep received a record-breaking sixth Emmy Award as best comedy series actress Sunday, using her victory to take a dig at GOP contender Donald Trump in a ceremony loaded with election-year asides.
A shaking Louis-Dreyfus ended her speech by dedicating the trophy to her father, who she said died Friday. Before that, she honed in on GOP contender Donald Trump’s campaign. “I’d also like to take this opportunity to personally apologize for the current political climate. I think that ‘Veep’ has torn down the wall between comedy and politics. Our show started out as a political satire but it now feels more like a sobering documentary,” she said.
She promised to “rebuild that wall and make Mexico pay for it.” Her victory gave her six best comedy wins — five for Veep, one for The New Adventures of Old Christine — and broke her tie with Candice Bergen and Mary Tyler Moore. 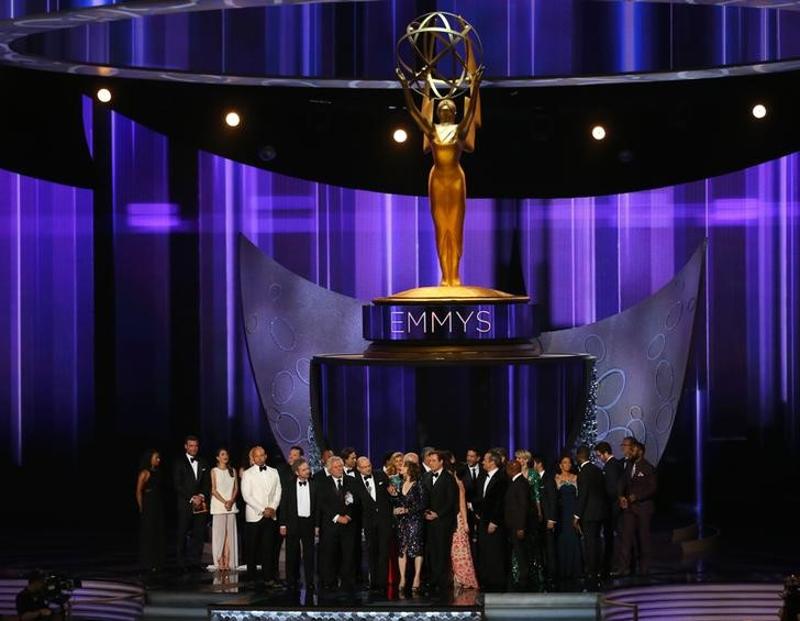 The People v. O.J. Simpson, which earned the second-highest number of nominations, converted five to trophies Sunday. The dramatic retelling of the football star’s murder trial was honoured as best limited series and writing, and earned awards for stars Courtney B. Vance, Sterling K. Brown and Sarah Paulson. “Obama out, Hillary in,” Vance said as he wrapped his victory speech.
Regina King claimed the award for supporting actress in a limited series for American Crime, her second trophy for the program.
Louie Anderson was honoured as best supporting actor in a comedy series for his portrayal of a loving but tough mom in Baskets. “Mom, we did it!,” Anderson shouted, hoisting his trophy and dedicating the award to his late mother, Ora Zella Anderson. “I have not always been a good man but I play one hell of a woman.”
Saturday Night Live cast member Kate McKinnon won the trophy for best supporting actress in a comedy for, officially, playing various characters. But she knew who to credit. “Thank you, Ellen DeGeneres, thank you, Hillary Clinton,” she said, naming two of the famous people she’s caricatured on the show. 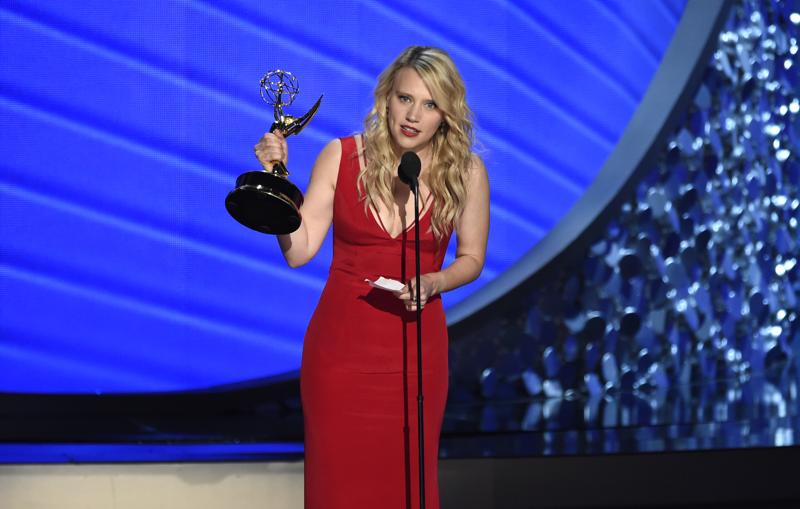 The Democratic presidential contender responded quickly with a tweet: “Congratulations on your Emmy, Kate! Big fan of yours, too.”
The ceremony started out with a political edge. In a video bit, Jimmy Kimmel was shown trying to get to the ceremony and encountering former GOP presidential contender Jeb Bush as a limo driver. “Did you know you could make $12 an hour working for Uber?” a game Bush said, smiling. He advised Kimmel that “if you run a positive campaign, the voters will ultimately make the right choice”— then told Kimmel curtly it was a joke.
In his opening monologue, the host said he was holding “Celebrity Apprentice” producer Mark Burnett responsible for the Donald Trump phenomenon.
In an attempt at comedy that fell flat, the ceremony announcer indicated that Bill Cosby would be taking the stage. After an awkward silence, Kimmel said it was a joke — the TV star embroiled in decades-old accusations of sexual assault wasn’t invited.
On the red carpet, Judith Light was being fully transparent when she told bleacher fans how difficult it is to walk a red carpet in heels. “I can’t walk, but thanks,” the actress, nominated for her role in a comedy series for Amazon’s Transparent, said as she responded to shouts and cheers from fans in the red-carpet bleachers.
Tambor, who plays her transgender ex-spouse and is vying to repeat as best comedy actor, shared serious words about the series.It’s “changing the landscape of television. I think it’s changing the landscape, period,” he said.