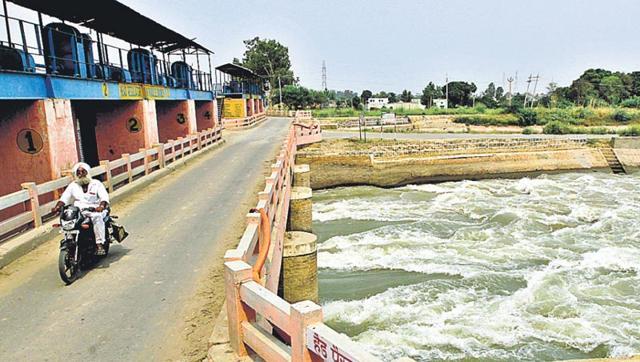 Delhi’s water supply lifeline, the Munak canal, may soon get a wire mesh to stop rotting human bodies from floating into the Capital from Haryana.
The 102-kilometre canal brings water from the Yamuna to Delhi and is crucial for supply to vast swathes of Dwarka, southwestern and southern Delhi.
But before the water reaches the Haiderpur treatment plant, it carries scores of corpses – many of them victims of crimes and decomposed beyond recognition. The police have now decided to build a wire mesh across the canal near Daryapur village, and say the structure will help reduce the number of unsolved cases of floating dead bodies that arrive in Delhi from neighbouring states. “By the time bodies are recovered in Delhi, they are heavily bloated, making identification near impossible. If they’re caught in Haryana itself, it will help in identification,” said Vikramjit Singh, deputy commissioner of police (outer Delhi).
The canal flows around 20 km in the capital covering areas of outer Delhi and falling under the jurisdiction of five police stations — KN Katju Marg, Bawana, Shahbad Dairy, Narela and Samaypur Badli.
Police say they recovered 81 bodies last year and 49 already this year till August. The bodies comprised those who committed suicide, were murdered or drowned.

But the move may run into a bureaucratic hurdle as the Haryana and Delhi authorities have differed in the past over how to best deal with dead bodies. Haryana Police removed a decades-old wire net across the Munak canal in the 1990s, saying it was blocking waste.
This time, Delhi Police say, they’re in talks with their Haryana counterparts and the decision to install a mesh was taken at a recent inter-state coordination meeting.
“The canal has become a dumping ground for bodies. The mesh at Daryapur would help discover the bodies at Haryana itself, which will fasten the process of identifying the body and start investigation,” said a senior officer.​
You must log in or register to reply here.
Share:
Facebook Twitter Pinterest WhatsApp Share Link
Top