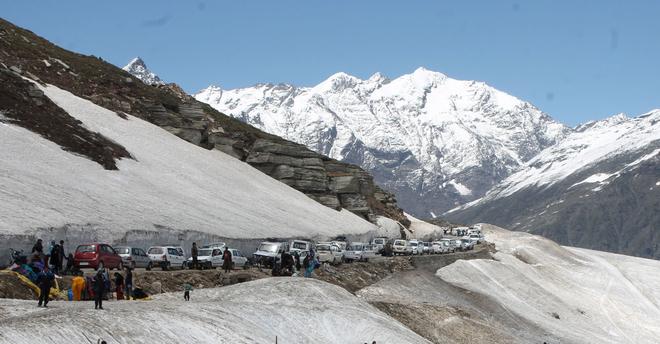 The project Rohtang tunnel of the Border Roads Organisation is about to cross the Seri Nulla, its toughest patch from the south portal.
The authorities have set December 2017 as a new deadline to link the north and south portals as the project is two years behind schedule.
The authorities have excavated about 5.12 km out of the 8.82-km Rohtang tunnel that aims to provide an all-weather road access to the snowbound Lahaul valley and further to the Ladakh sector. The Manali-Leh highway has emerged as an alternative route to Ladakh and Kargil after the 1999 Kargil war.
“We will cross Seri Nulla soon as about 25 m length remains to be excavated”, said a project engineer. Water in Seri Nulla was flowing at 100 lt per seconds. Once this patch is taken care of, the work on the south portal was expected to gain pace, he added.
The work on the north portal from Lahaul had started much later and remained suspended for almost five months in winters. But about 2.9-km of tunnel had been excavated as the strata had turned out to be harder but had not posed much problem, said the project engineer.
On the other hand, the work had been progressing at a sluggish pace from the Manali side for the past more than three years due to Seri Nulla. The contractor has excavated just 2.3 km from the south portal so far for the past four years, said project sources.
The work on the Manali side is still going on at a slow rate. “The excavation varies from 5 m to 20 m a month as we face water ingress there. We expect we will be able to link south and north portal by December 2017”, said RS Rao, Superintending Engineer of the Rohtang tunnel project.
He said they were excavating about 110 m tunnel length every month from the Sissu side in Lahaul. “The work from the Manali side is expected to speed up as we are crossing Seri Nulla, a major challenge for the project”, Rao added.
You must log in or register to reply here.
Similar threads
Padmavati cleared for Dec 1 release in Britain, SC to hear plea for not releasing film out
It Was 16th Dec 2012; This Is 16th Dec 2016. Another Day Another Rape In Delhi
Four years after Dec 16: Number of rape cases in Delhi have increased
Silence won’t bring change, must talk about rape: mother of Dec 16 victim
Railways cancel 2,771 trains for a month from Dec 17 due to fog
Share:
Facebook Twitter Pinterest WhatsApp Link
Top