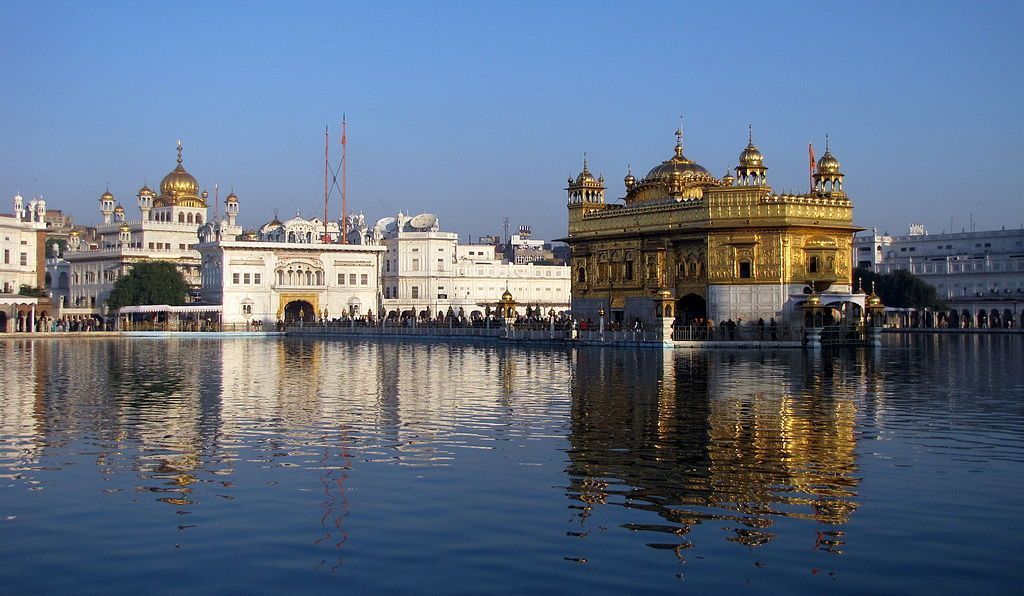 
Akal Takht and Harmandir Sahib, Amritsar, Punjab, India.
The Akal Takht was begun by the sixth Sikh Guru, Guru Har Gobind as a symbol for political sovereignty of Sikhs. It stood as a symbol of political and military resistance against the tyranny and cruelity of the rulers the 17th and 18th century. In the 18th century, Ahmed Shah Abdali led a series of attacks on the Akal Takht and Harmandir Sahib.
On June 4, 1984, the Akal Takht building was destroyed during Operation Bluestar launched by the Indian Army on controversial orders of Prime Minister Indira Gandhi to evict a group of armed Sikhs separatists that had fortified the buildings. The Akal Takhat was founded by Guru Hargobind on June 15, 1606 (now celebrated on 2 July) and was established as the place from which the spiritual and temporal concerns of the Sikh community could be acted upon.
It stood as a symbol of political bulwark against the Mughal Emperors in the 17th and 18th century. Various attacks on the Akal Takhat and Harimandir Sahib have been led in past by Ahmed Shah Abdali and Massa Rangar in the 18 century. On June 4, 1984, the Indian Army did more than just damage the outer facade of the Akal Takhat, they destroyed the sancitity of the Akal Takht with tanks and reduced it to rubble, while attempting to take out Sikh militants in a controversial military operation known as Operation Bluestar.
It is the most supreme of all the Takhats. There are four other takhats established by the panth (community) during the last century:
Keshgarh Sahib (Anandpur)
Patna Sahib
Hazur Sahib
Damdama Sahib
Often, Amritsar is considered a takht.
The Jathedar of the Akal Takhat is the highest spokesperson of the Sikh Panth and is meant to be a spiritual leader without control or influence from any outside, politically motivated sources.
Khande-Bate-Dee-Pahul or the initiation with the sword, initiated by Guru Gobind Singh, continues to be routinely performed at the Akal Takht. Hari Singh Nalwa, a General under Maharaja Ranjit Singh the leader of the Sikh Kingdom, wished to make the Akal Takht resplendent with gold and had donated a part of his wealth for this purpose.

Two years after the Adi Granth was installed in the Harimandir Sahib, its compiler, Guru Arjan Sahib ji was arrested and tortured to death by order of the Mughal Emperor Jehangir. Jehangir mentions in his biography his opposition to the faith of Guru Arjan Sahib ji and his desire to convert him to Islam. He states that he was given an opportunity when Guru Arjan Sahib ji harboured his rebel son Khusro. But, although some historians see the harbouring of Khusro as a political act, nothing in Guru Arjan Sahib ji’s life supports this view. It is said that the success of Guru Arjan Sahib ji in transforming Sikhism into a new age faith earned him many enemies. They were at pains to bring harm to Guru ji and had even made an unsuccessful attempt to harm him by complaining to Akbar. His concerns were spiritual, not political, and the murder of this man of profound learning was a senseless act. It gave Sikhism its first martyr and transformed a peaceful movement of reconciliation and reform into the most militant organization witnessed in India.
This tragic turning point left a deep impression on the Sikh psyche in the form of a sharp and sudden awareness of the concept of martyrdom. Out of it grew the community’s tradition of taking an implacable stand against injustice and the vagaries of tyrannical rulers. A new and lasting dimension was now added to the Sikh sense of mission and purpose.
Before his death, anticipating that the end was near, Guru Arjan Sahib ji in a parting message to his son asked him to, “sit fully armed on his throne and maintain an army.” And Guru Hargobind did just that.

Guru Hargobind acceded to the Guruship in 1606, after his father’s tragic end. Although he was just eleven years old at the time, Guru Hargobind is believed to have immediately begun the process of militarisation of the Sikh Panth. At the ceremony of ascension, the Guru declared his intentions: on his turban, he would wear the ruler’s aigrette; instead of the ascetics seli, he would wear a swordbelt with two swords symbolizing Miri and Piri, temporal and spiritual authority. Adopting traditional marks of sovereignty, Guru Hargobind asked his Sikhs to donate not cash but horses and arms. He raised a troop of 52 bodyguards, which formed the nucleus of his army. 500 youths came to him for enlistment from the Manjha (the country between the Ravi and Bias), the Doab (between the Bias and Satluj) and the Malwa countries (comprises the portion of the Punjab formed by Patiala, Nabha, Jind, Faridkot, Firzopur and Ludhiana). Guru Hargobind is also credited with developing Gatka, the martial arts of the Sikhs.
Guru Hargobind’s architectural projects, not surprisingly, reflect his agenda and his personality. On Monday, the fifth day of the light half of Har, Sambat 1663, Guru Hargobind ji laid the foundation of the Takhat Akal Bunga.

Role of the Akal Takhat

The original structure of Akal Takht was built by Guru Hargobind ji, Bhai Gurdas ji and Baba Buddha ji, with their own hands. No other person or artist was employed to build the platform. Guru ji remarked that the seat of guru would serve the panth for eternity. Guru ji raised the height of the platform to twelve feet, defying the royal edict of Jehangir that no other person except the Emperor himself can sit on a raised platform of more than three feet. Guru Hargobind would regularly sit on the raised platform, Takht, with all marks of royalty and dispence justice for all disputes of Sikhs.
The Akal Takhat was built a fraction lower than the Harimandir Sahib, implying the order of importance, that the search for spiritual grace was always to lead. A similar balancing of assertion and submission was built into Guru Hargobind’s daily routine, which alternatively highlighted the shrine, with its spiritual function and self-effacing architectural symbolism, and the throne platform, with its assertion of sovereignty and temporal authority. The Guru started the day with worship in the Harimandir; he would then go on a hunt in the late morning and grant audience from the Akal Takhat in the afternoon; in the evening he would return to the shrine for prayers and hymns, and at night he and his followers would return to the Akal Takht to listen to martial songs of heroic deeds.
It is from the Akal Takhat that Hukamnamas (edics or writs) are announced to provide guidance or clarification on any point of Sikhdoctrine or practice. It may lay under penance persons charged with violation of religious discipline or with activity prejudicial to Sikh interests or solidarity. It may place on record its appreciation of outstanding services rendered or sacrifices made by individuals espousing the cause of Sikhism or of the Sikhs. Importantly, no individual is above the Akal Takhat.
On one occasion the Sarbat Khalsa met at the Akal Takhat and decided to penalize Maharaja Ranjit singh for his misdemeanours with a certain number of lashes on his back. The Gursikh in Ranjit Singh surrendered to the discipline and presented himself at the Akal Takhat to receive chastisement. However, corporal punishment to the sovereign was converted into a heavy fine.

On the original plot of land of the Akal Takhat, there only existed a high mound of earth across a wide open space, where Guru Hargobind as a child used to play. The Gurus original Takhat is said to have been a simple platform, 3.5 metres high, on which the Guru would sit like a king at court, surrounded by insignia of royalty such as the parasol and the flywhisk, and perform kingly tasks of receiving petitions and administrating justice. Today’s Akal Takhat is a large 5-storey modern structure (3 storeys were added by Maharaja Ranjit Singh) with inlaid marble and a gold-leafed dome, that does not convey the design of Guru Hargobind’s simple Takht or plinth. However, recent restoration work has uncovered a layer of lime plaster, with painted decoration, that may have been part of the original Takhat. That plinth was far higher than the plinth of the Harimandir; yet the absence of a superstructure kept the original Akal Takhat at a level lower than the shrine.
The elaboration of the structure on marble pillars, as a semi-circular platform with an open view to the courtyard, reminiscent of an air-house, must have grown from the use to which the Durbar hall was put.
The gilding of the ceiling with ornamentations like those in the interior of the Hari Mandir is perhaps later than in the holy of holies. The wall paintings apparently belong to a later period, as there are panels showing Europeans.
The total effect of the Akal Takhat and the open courtyard, in front of the Darshani Deori and the viewa of the Amritsar beyond, is of a unique and noble structure remenisant of the of the piazza Saint Marco in Venice where the Doge's Palace faces the Grand Canal.


Known as 1984 Ghallugaara (Great holocaust) to the separatists known as Khalistanis, on June 6, 1984 the Indian Army stormed the Golden Temple, even bringing its tanks onto the Parikrama during the Operation Blue Star. Untold numbers of Sikhs, both the armed contingent of Jarnail Singh Bhindranwale, thousands Innocent Pilgrims to the Harmandir Sahib and army personnel were killed. Many rare manuscripts, artifacts, precious jewels, other valuables and historic literature from the time of the Gurus were lost and looted when the Sikh reference library was burnt down.
The Akal Takht, the supreme seat of authority for the Sikhs bore the brunt of the attack suffering severe damage. Many Sikh artifacts were burned in the destruction which ensued and several lives were lost.

Re-building of the Akal Takht

At first the Akal Takht was rebuilt by Contractors of the Indian Govt. A few Sikhs who were than excommunciated from Sikhism, for what Sikhs saw as siding with the Indian Govt.
The rebuilt Akal Takht became known as the 'Sarkari Takht' - Sarkari meaning one of the Government and not that of Akal meaning Immortal one - God.

thanks for sharing info....