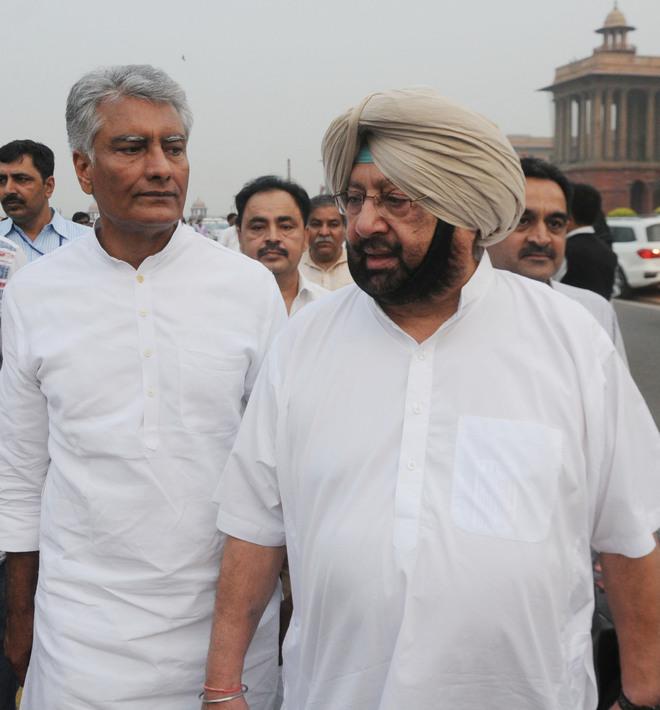 Former Chief Minister Capt Amarinder Singh today dared Prime Minister Narendra Modi to act against the RSS men facing cases in the 1984 anti-Sikh riots and asked what was preventing him from delivering justice in the matter. Appearing for the first time in any Congress agitation since the party lost power at the Centre in May 2014, Amarinder today walked alongside party president Sonia Gandhi and vice-president Rahul Gandhi to Rashtrapati Bhavan to protest prevailing intolerance in society.
Considering only a month ago Amarinder had talked lightly of the Sonia Gandhi-led agitation against the suspension of Congress’ Lok Sabha MPs, his presence in the party’s protest march today caused quite a flutter.
Many Congress men wondered if Captain’s appearance was a sign of his return to the reckoning and whether it had anything to do with possibilities of him being named Punjab Congress president in the wake of a pending reshuffle. Captain on his part downplayed this talk saying “he was present because he strongly believed that the Modi government was intolerant towards minorities”. On the Punjab Congress leadership issue, Amarinder said it was for the leadership to decide. Captain has been seeking the replacement of incumbent state party chief Partap Bajwa, who too was present in the march today.
Asked when he thought a decision would be taken, Amarinder said: “I think the party will soon decide whatever it has to.” Captain’s appearance was also his way of telling the party that he was going nowhere and wasn’t forming any party as Bajwa had claimed.
On PM Modi’s anti-Sikh riots jibes on the Congress, Captain said: “Instead of attacking us, the PM should take action against those facing FIRs, including RSS men, who have 120 FIRs against them in the anti-Sikh riots case.”
You must log in or register to reply here.
Similar threads
Sukhbir dares Capt with rally near Patiala palace
Punjab News Capt Amarinder Singh 15 ਅਕਤੂਬਰ ਨੂੰ ਕਰਨਗੇ Amritsar ਦੌਰਾ
Capt Kundu was to be back home on b’day, Feb 10
Open debate challenge: Arvind Kejriwal, Capt Amarinder Twitter war heats up
AAP failed, Capt too will: CM
Share:
Facebook Twitter Pinterest WhatsApp Link
Top