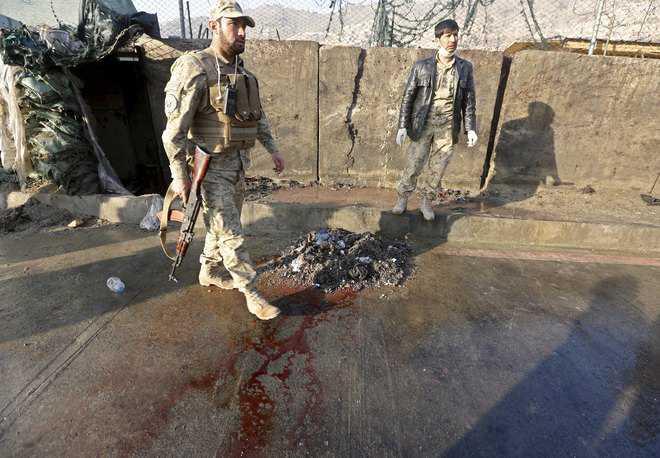 A Taliban suicide bomber struck a police base in central Kabul today, killing at 20 persons just days before a fresh round of international talks aimed at reviving dialogue with the Islamist group.
"As a result of the terrorist attack this afternoon... 20 people were martyred and 29 others were wounded," the interior ministry said. The deputy interior minister earlier gave a death toll of 10.
The attack comes amid the Taliban's unprecedented winter offensive despite a renewed push to restart formal peace talks.
The interior ministry initially reported the attack as a suicide car bomb, but later said the attacker appeared to be on foot and detonated himself in a queue of people waiting to get inside the base.
The carnage comes just ahead of a third round of four-country "roadmap talks" trying to lay the groundwork for direct dialogue between Kabul and the Islamist group. Delegates from Afghanistan, Pakistan, China and the United States are set to convene in Islamabad on February 6 in a bid to seek a negotiated end to the Taliban insurgency, now in its fifteenth year.
The Taliban have stepped up attacks on government and foreign targets in Afghanistan this winter, when fighting usually abates.
In recent months the Taliban briefly captured the northern city of Kunduz, the first urban centre to fall to the insurgents.
You must log in or register to reply here.
Similar threads
IS, Taliban claim Quetta hospital attack that killed 70
'Taliban killed Benazir with Musharraf's consent'
2 indians among 6 killed in taliban attack on indian consulate
2 Soldiers Killed In Terror Attack In Jammu And Kashmir's Anantnag
Teenage Girl, 2 Others Killed In Kashmir As Forces Fire At Stone Throwers
Share:
Facebook Twitter Pinterest WhatsApp Link
Top