World Cup replica made of cocaine seized in Colombia 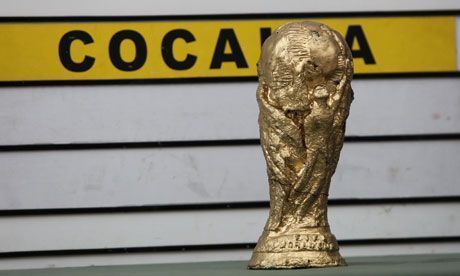 The replica statue seized by police in Colombia. Photograph

A replica World Cup trophy made out of cocaine has been seized at Bogotà airport in Colombia.

The airport's anti-drug chief, Colonel José Piedrahita, said the statue had been found inside a carton destined for Madrid during a routine check of a mail warehouse on Friday; standing 36cm (14in) high, it was painted gold with green stripes on the base.

Piedrahita said a lab test confirmed the cup was made of 11kg (24lb) of powder, which would have been mixed with acetone or petrol to make it into a paste that could be moulded. The cocaine would be worth up to £1m on the street.
You must log in or register to reply here.
Similar threads
ICC change his mind and team india enters at T20 world cup final
Punjab News The final schedule of world cup matches and their venues
Punjab News Second Kabaddi World Cup Nov.2011
Singh regains magic touch after the high-pressure World Cup
Lashkar-e-Taiba planned to strike at World Cup final
Share:
Facebook Twitter Pinterest WhatsApp Link
Top