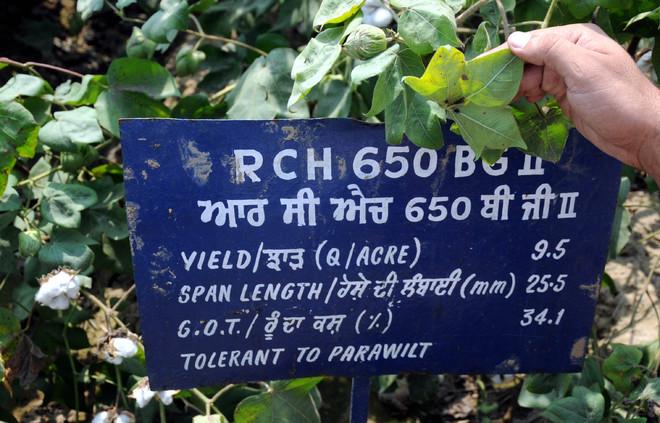 Cotton crop grown on research fields on the campus of Punjab Agricultural University has come under the attack of whitefly. The development has come as an embarrassment for the PAU Vice-Chancellor who had blamed farmers for damage to their crops.
During a visit to the PAU campus, it was observed that despite proper care and spray of recommended insecticides, the crop got damaged by the whitefly.
Various departments had sown the cotton crop on the campus for research. The number of insects under each leaf is more than 10 in most of the fields and the crop has turned black. The cotton fields prepared for exhibition during the upcoming Kisan Mela are also affected by whitefly.
Dr Baldev Singh Dhillon, Vice-Chancellor, had blamed the growers for mismanagement while sowing the cotton crop. While addressing a gathering at Kisan Mela in Jalandhar on September 12, Dr Dhillon had said the farmers did not take recommendations of PAU into consideration while sowing the crop that resulted in loss.
Contrary to vice-chancellor’s views, Dr Balwinder Singh, Director, Research, PAU, said hot, humid and dry weather had led to whitefly attack on cotton crop.
“The temperature in the third week of July was recorded 32 degree Celsius to 35 degree Celsius in southern Punjab. The farmers delayed the spray of insecticides due to the fear of rain. As far as our fields are concerned, we did not spray on some of the research fields to study the effect on crop that has not been sprayed. The attack of whitefly is rampant in the region. How could PAU campus remain unaffected?” said Dr Balwinder Singh.
Govt failed farmers, says Manpreet; seeks probe
Bathinda: People’s Party of Punjab chief Manpreet Badal on Monday demanded an inquiry into the sale of spurious insecticides and pesticides by an independent agency. He said the agency must also look into the supply of substandard seed and other inputs as maintaining quality control was the job of the state government, but it had failed the farmers. Accusing the government of not helping farmers, he said it was pity that those who opted for alternative crops such as cotton and sugarcane had been suffering. “The farmers have suffered damage for the third consecutive year. The situation has been complicated by lack of government control over the quality of seed and pesticides,” he said, demanding compensation at the rate of Rs 20,000 per acre for cotton growers.
You must log in or register to reply here.
Similar threads
Fires Destroy Wheat Crop, Devour Five
In Punjab, 25% cotton crop gone & counting
Punjab News PAU okays 2 high-yielding varieties of wheat, cotton
Fire in cotton mill destroys bales worth rs 2.50 cr crore
Punjab slashes market fee, RDF on raw cotton
Share:
Facebook Twitter Pinterest WhatsApp Link
Top