What they don't want us to read 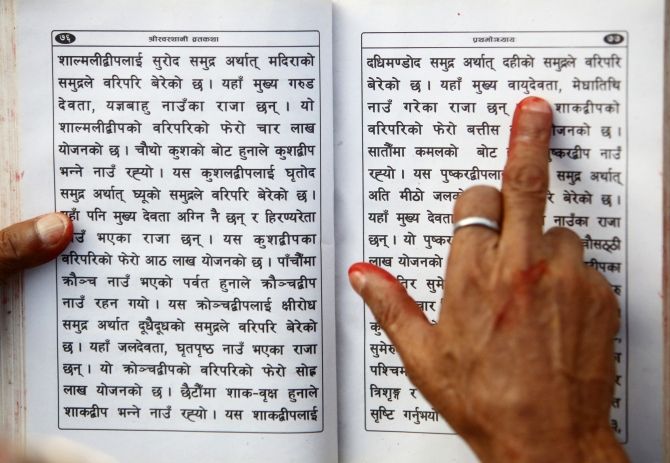 On the face of it, there appears to be no reason why Wendy Doniger's books on Hinduism should rile anybody, including even the right-wing Hindu nationalists. In interpreting and analysing Hindu scriptures in her books, she remains faithful to the original texts and offers her understanding of how the Hindu mind has evolved over time, refusing to be bracketed within the narrow confines of monolithic ideas.

You may disagree with some of those ideas and, indeed, she even confesses that what she writes is "a history, not the history of the Hindus".

But what you cannot simply ignore is Doniger's strong academic credentials and the ease with which she explains even the most complex of Hindu beliefs enunciated in the Vedas, Upanishads and many Tantric texts. Remember that she holds two doctorates -- one in Sanskrit and the other in Indian studies -- from Harvard and Oxford, and has taught at some of the world's best universities.

Yet, The Hindus: An Alternative History, which came out in 2009, is now in the eye of a storm in India, where its publishers have decided to pulp it. This brings to an end a four-year long legal case that had challenged some sections in the book which the petitioners argued had hurt the religious sentiments of the Hindus.

But there seems to be no end to the controversy over the book or its author. And if the petitioners are to be believed, a similar fate could await another of Doniger's books published in India last year - On Hinduism, a compilation of essays that she has written over the years.

It will, of course, be naïve to conclude that Doniger had no inkling of the kind of trouble she was courting by writing a book on the Hindus and their religious texts. The seeds of the book were sown during one of her lectures in England in 2003, where a Hindu fanatic had thrown an egg at her after she had explained the complex relationship between Sita and Lakshman, younger brother of her husband Ram. Mind you, the complex relationship was not cooked up by Doniger.
You must log in or register to reply here.
Share:
Facebook Twitter Pinterest WhatsApp Link
Top