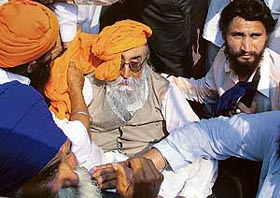 Shiromani Akali Dal (Amritsar) chief Simranjit Singh Mann with his supporters after a clash with activists of the Gurdaspur SAD jatha and the SGPC task force at Kathunangal on Wednesday. — Photo by Rajiv Sharma
The 500th birth anniversary celebrations of Baba Budhaji — the first head granthi of the Golden Temple — was marred when leaders of the Shiromani Akali Dal (Badal) clashed with activists of the SAD (Amritsar), led by its president Mr Simranjit Singh Mann, with the police remaining a mute spectator here today leaving many injured from both sides.

When tempers flared up a big crowd pounced upon Mr Mann, Mr Daljit Singh Bittu and Mr Gurjatinder Singh Bhikhiwind, president, senior vice-president and general secretary, respectively, of the SAD (A). Both factions started throwing stones at each other forcing the police to flee the scene. Mr Iman Singh Mann fell on his father to protect him as the crowd rained lathis. Shots were also fired from the pandal into the air. Devotees got panicky and started running helter-skelter. In the melee, Mr Mann and Mr Bittu received minor internal injuries while Mr Bhikhiwind received sword injuries. Mr Parkash Singh Badal was delivering his speech at the time of clash.
Mr Om Parkash Chautala, a former Chief Minister of Haryana, who was invited by the Badal faction as a special invitee could not deliver his speech and the function had to be wound up hurriedly.
The Badal faction alleged that the function was disrupted at the behest of the Congress government. A letter to the district police chief was also sent for taking preventive measures by Dr Rattan Singh Ajnala, president, District Akali Jatha.
The trouble started when more than 250 activists of the SAD (A) marched from the local grain market to the main pandal pitched by the SAD (B), near Janam Asthan gurdwara. However, the police disarmed many of the SAD (A) activists and allowed them free access to the main entry of the pandal, where Mr Om Parkash Chautala was also invited. While the SAD (A) had already announced to stop Mr Chautala and Mr Navjot Singh Sidhu, BJP MP, from ascending the stage, the Badal faction had announced to accept the challenge. The Badal faction leaders, including Mr Sukhbir Singh Badal, general secretary, had stated that a proper reply would be given to Mr Mann and his men if they tried to disturb the function of the SGPC and the SAD (Badal).
The Akali workers, who entered a no-holds-barred clash, was led by former Akali Minister Sucha Singh Langah, Mr Rajinder Singh Mehta, an SGPC member, Mr Gurpartap Singh Tikka, Dr Rattan Singh Ajnala and Mr M.S. Manna, a Youth Akali leader. Mr Amarpal Singh Bonny, a son of Dr Ajnala, was heard urging the Badal activists to ‘take care’ of Mr Mann and his followers.
Mr Satnam Singh Kanda, organising secretary, All-India Shiromani Akali Dal, while condemning the ‘attack’ by the Badal faction urged the Sikh organisations to convene a ‘Sarbat Khalsa’ on this issue.
However, Bhai Mohkam Singh, a spokesman of the Damdami Taksal and Mr Kanwarpal Singh Bittu , general secretary, Dal Khalsa, were not hurt in the clash.
It is the second unsavoury situation in less than four months when the SAD (A) and the SAD (B) activists clashed during a Sikh centenary celebrations to the disappointment of Sikh masses. Earlier, the quadricentennial celebrations of the foundation of Akal Takht was marred by a clash when turbans of SGPC chief, Avtar Singh Makkar, president, Shiromani Akali Dal (Amritsar), Simranjit Singh Mann, and some other Sikh leaders fell off in the presence of Guru Granth Sahib and Sikh high priests, at Manji Sahib inside the Golden Temple Complex on July 2.
Later, on August 30 SGPC chief Avtar Singh presented Mr Mann with a siropa at Talwandi Sabo on the concluding day of Sampurnta Divas of Guru Granth Sahib.
In the clash, members of the Badal and the Mann factions of the SAD used swords, lathis and attacked one another with fists.
On June 16, Mr Mann had succeeded in addressing the Sikh Sangat from the SGPC’s stage at Tarn Taran to mark the quadricentennial of the martyrdom of Guru Arjan Dev though senior SAD leaders were not in favour of inviting him to address the gathering.
Today’s clash has sent a signal all over the world that a Sikh centenary could be organised in a peaceful way, without a controversy starting from the tercentenary of the birth of the Khalsa Panth on April 13, 1999.
The Kathunangal police has registered a case after the clash under Sections 323, 336, 148 and 149, IPC, and Sections 25, 54 and 59 Arms Act, against both the factions. Confirming this, Mr Gautam Cheema, district police chief, Majitha police district, said that names would be added in the case after recording the statements of eyewitnesses.
N

Badal the #1 gadar and his bastard goons and thugs will go down with a hail of bullets soon, there's nothing to worry about, their days are numbered.
G

If the SGPC is going to allow the political party of Badal and BJP take the stage, then they have no right to stop Simranjit Singh Mann and his party from speaking. The police disarmed Mann's party members and stood by while Badals thugs and the SGPC thugs beat them. This has happened so many times before where the SGPC task force ruthless beat Sikhs by grabbing them by their hair and dragging them across the floor. Badal needs to be shot and killed, thats the only solution.
G

narinder29 said:
Badal needs to be shot and killed, thats the only solution.
Click to expand...

religion and politics should be separate...
shame on these mantris...

narinder29 said:
Badal the #1 gadar and his bastard goons and thugs will go down with a hail of bullets soon, there's nothing to worry about, their days are numbered.
Click to expand...