Voice Of Consumer: Harassment, Extortion & Threat To Life Caused By A Hospital, Alleges So

Voice Of Consumer: Harassment, Extortion & Threat To Life Caused By A Hospital, Alleges So 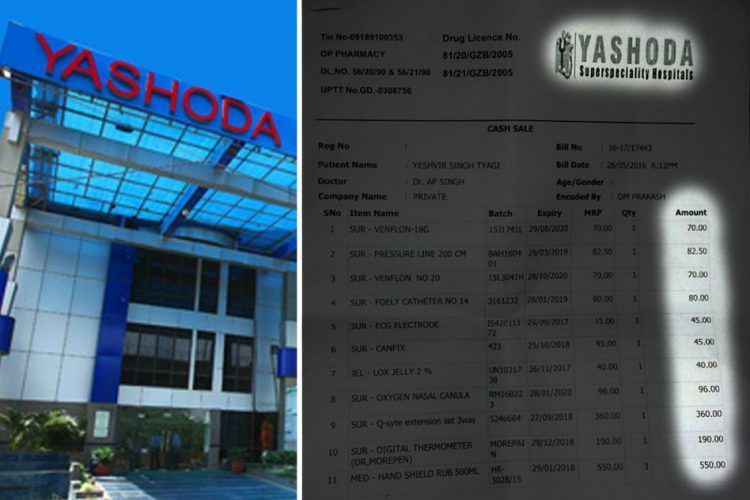 Amit Tyagi, son of an ex-serviceman posted this on his timeline. According to him, he has forced to pay for the medicines although he was eligible for a free service under ECHS. He also alleges that actions of the hospital staffs put the life of his father in danger.

“My father is an ex-serviceman & his medical is covered under ECHS. His treatment has to be cashless at all ECHS affiliated hospitals. My father was diagnosed with high Urea & Creatinine in Roorkee on 24th May 2016. I called him here in Ghaziabad & on 25th May, we admitted him to Aarogya hospital, Vaishali, which is in close proximity to our house. The doctors informed that my father had suffered acute kidney failure & if the situation persists, he might need dialysis. I contacted all the doctors known to me, including Dr. Sudhir Tyagi, Surgeon at Yashoda hospital Kaushambi, who happens to be from our village Faloda in district Muzaffarnagar. Dr. Tyagi insisted that I shift my father to Yashoda as it has better infrastructure, Doctors & facilities. On his advice, we shifted my father to Yashoda on 26th May morning. After initial tests, he was shifted to ICU from emergency.

Next morning, we visited my father in ICU during visiting hours. After which I was told that he may need to be put a central line, to monitor his body fluids. They gave me another list of items to be bought from Pharmacy, which costed me close to 6500/- INR. I bought the items & gave to ICU attendants. We then returned back home. In the afternoon, I received a call from the hospital informing that my father needs to be given an injection which is not covered under ECHS. I asked them the cost & they informed it’s around 4000 INR. I told them to give the injection & I shall pay for it. Meanwhile, I called to Wing Commander Panwar in ECHS Hindon, Ghaziabad & asked if there is any such list of medicines which is not covered by ECHS. He informed me that I need not pay a single penny & my father’s treatment has to be cashless. Whatever the claims of the hospital would be, have to be settled by the hospital with ECHS offices. Then I went to hospitals in the afternoon & spoke to Dr. Vikram, who heads the Panel department at Yashoda hospital. He gave me reasons that ECHS doesn’t reimburse for few items & hence I have to pay for them. When I told him about my discussion with Wing Commander Panwar, he agreed that as per ECHS policy the patient has to be treated cashless, but also said that they are there to make profits & hence would not be willing to take up losses due to denial of payment by ECHS for some items. By the end of the discussion, he assured me that henceforth I would not be asked to buy things, other than few exceptional items. I left the hospital after paying for the injection & his assurance. In evening & next day morning, we visited my father in ICU during visiting time & we were told that his situation is improving. In all, I had paid more than 12900/- Rs by this time.

In the evening, we again visited the hospital during meeting hours of ICU. I was told by the doctors that my father may need dialysis as his Urine output has decreased considerably. The ICU staff gave me a list of items I need to buy for Dialysis, which estimated around 16,000/- INR. I informed them about my discussion with Dr. Vikram. They tried to contact Dr. Vikram on the phone but he was in a meeting. They then contacted Mr. Jai Prakash in the management department. Mr. JP (as the staff was calling him) went to see Dr. Vikram & on returning informed that I need not buy the items required for Dialysis. However, in another hour, I was called again & was asked to buy those items again. I then went to meet Dr. Vikram who insisted that I should buy at least those items. I had to call Wing Commander Panwar again who also spoke to Dr. Vikram on my phone. After their conversation, Dr. Vikram told me to that they are willing to discount me INR 5000/-. Frustrated by this harassment, finally, I had to call Major General Bam, MD, ECHS, informing him about the situation. Major General Bam was very kind to take my call & he politely but categorically told me that I need not spend any money & the hospital must treat my father on the cashless basis. He said that if hospital creates any issue I should make them speak to him. When I went back to inform Dr. Vikram about the same, he was very annoyed at me & told that I should not threaten him. I humbly submitted that I was not threatening him but was only informing him about what I spoke. In the end, Dr. Vikram told the Dialysis technician to get the items on their own. My father went for Dialysis in the night.

Next morning, at around 8 AM (visiting time of treating doctor to ICU) I went to the hospital again. I didn’t meet treating Doctor Dr. AP Singh but could speak to the duty Doctor in ICU. He informed me that my father was in the better situation, his Urea & creatinine had decreased & his Urine output was also better. I went back home, to return again during meeting hours of ICU (9.30 AM) with my family. This is when I met Dr. AP Singh, who informed me that my father’s other organs have also got affected & he might go into multiple organ failures. He told that my father’s intestines were not functioning; his Lungs have started accumulating water & he has respiratory issues too. He advised that I must shift him to RR Hospital. Subsequent to this, I called up Dr. Sudhir Tyagi, who was, even more, insisting that I must shift my father immediately. Dr. Tyagi said my father has only 3-4 days & he would not be in a situation to be shifted later. I spoke to many hospitals in next 3 hours but all denied to take my father for different reasons given by them. Some said they do not have a bed after hearing that my father was under ECHS. Some said I should come next day with papers & only after reviewing, they shall admit. A few said, being a Sunday they do not have specialist doctors available & hence they won’t be able to take a patient from another hospital’s ICU. Ultimately, I had to use my office sources to speak at Fortis hospital Noida & in next 2 hours of coordination, they agreed to take my father in an emergency. By the time his discharge papers were being prepared, I was called in ICU was told that my father needs to be put on BPAP & gave me another list to buy from Pharmacy, which I refused to buy, as my father was being discharged from that hospital. When I approached Yashoda hospital reception to provide Ambulance for transfer, they even denied that. I had to again coordinate with Fortis hospital for Ambulance, for next one hour & finally their Ambulance came to transfer my father.

By evening, we reached Fortis & my father was taken into the emergency ward. Doctors studied his previous reports, conducted tests like X-Ray chest, Ultrasound etc. & in next 2 hours he was shifted to ICU.

Next morning, by the time all his reports were available, we were told that his intestines are working fine, his Lungs are clear, he has no respiratory problems & there is no case of multiple organ failures. They also informed us that my father has no breathing problem & thus doesn’t need any BPAP. By the time I write this, my father is shifted from ICU to a room of Fortis hospital.

With this I would like to highlight that Yashoda Hospital Kaushambi is guilty of :
1. Extortion of money from us, when my father must have been treated cashless.
2. Continuous Harassment for money.
3. Putting my father’s life in danger, by virtually creating a situation of throwing him out in a critical situation, when we didn’t concede to their demands further. The doctors, on the instruction of Dr. Vikram & management, conspired to create a situation where we were left with no option but to shift my father in such a critical situation, thus putting my father’s life in danger. 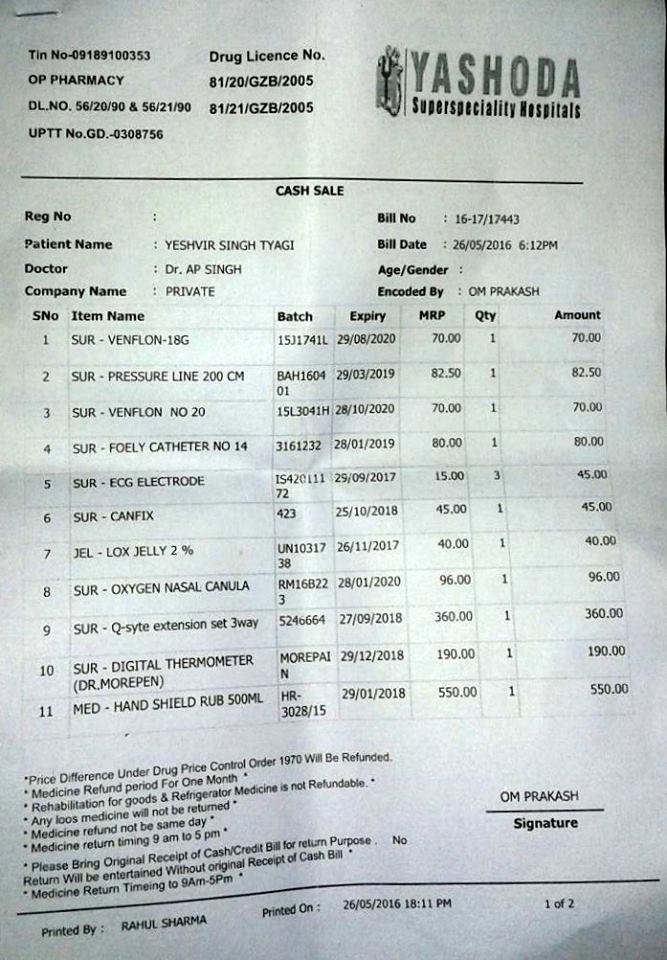 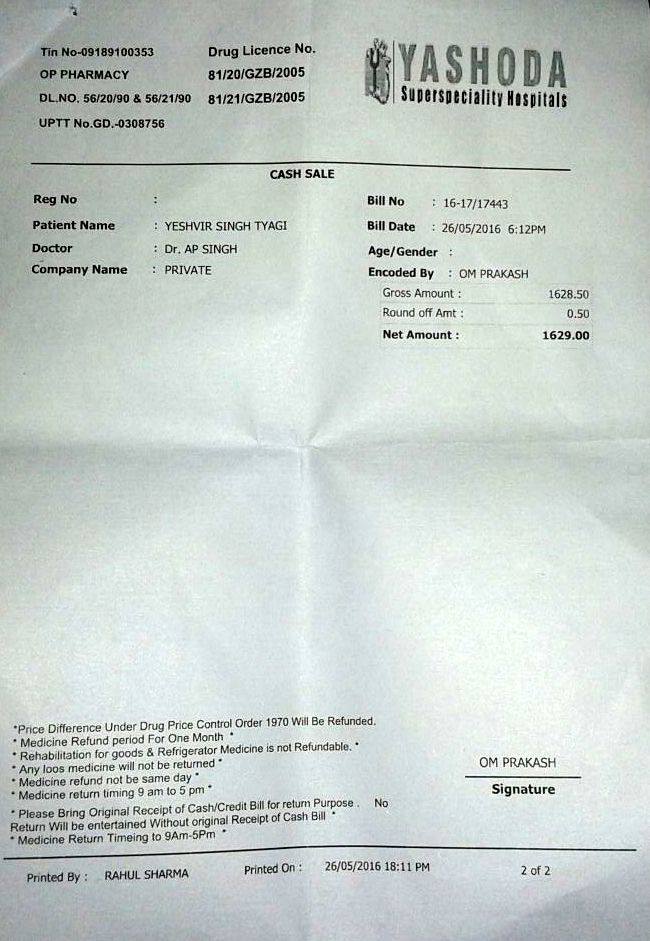 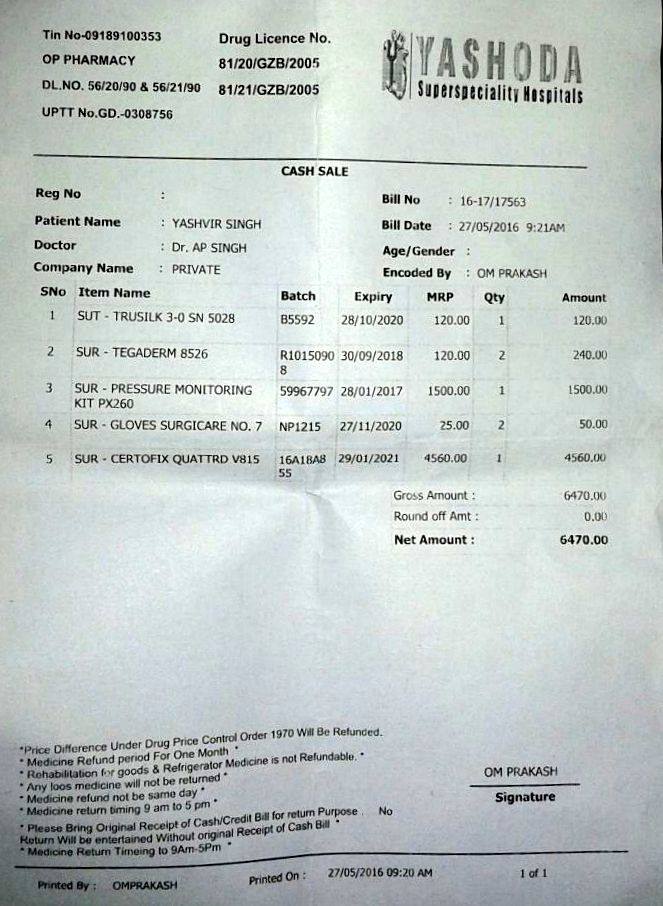 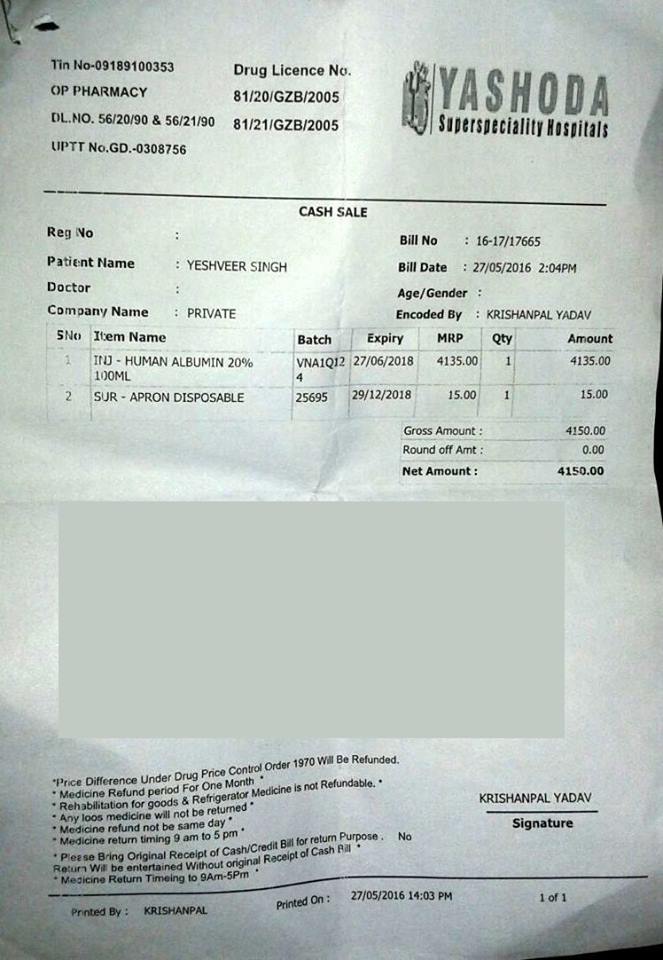 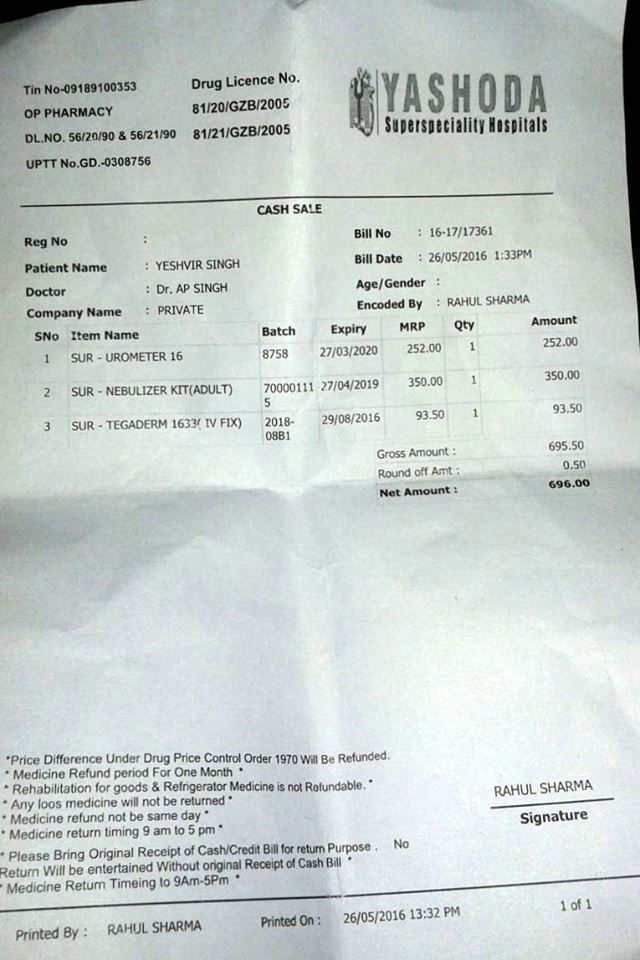