Vigilante justice: Ragpicker lynched in Delhi, found in a pool of blood 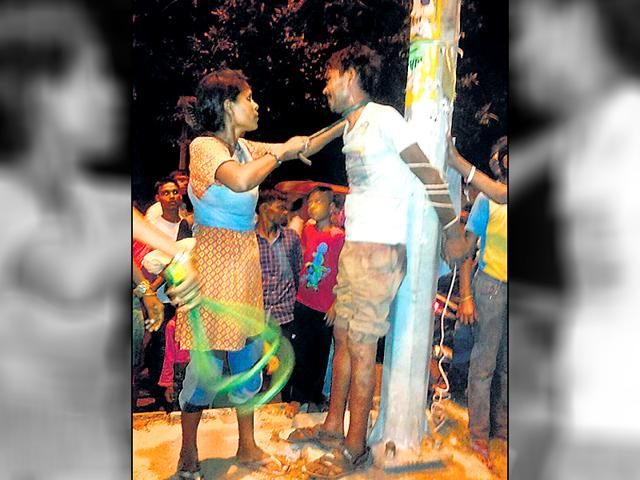 The last photograph Sahiba has of her husband, Mehboob, is of him tied to a pole and a rope around his neck. A woman is seen pulling the rope, another woman with a whiplash stands behind her amid a crowd of onlookers.
Sahiba says the photo was taken on the night of September 11.
The 35-year-old Mehboob, a ragpicker, was found dead on the morning of September 12 outside a parking lot of Kushal cinema in Jahangirpuri. The spot is metres away from where he was tied and allegedly beaten to death the previous evening.
Sahiba, a mother of three, accused residents of the neighbourhood of lynching her husband for allegedly stealing a pull cart.
“People took photographs and recorded videos when some men and women were beating my husband. I managed to get a video and photo and gave it to police,” she said.
But police didn’t register a murder case and have not arrested anyone so far. Mehboob’s murder was a case of vigilante justice, but police recorded it as death caused by negligence, the 34-year-old widow alleged.
DCP (northwest) Vijay Singh dismissed the allegation and said: “We have taken correct legal action.”
Sahiba was informed about the mob attack that evening, but she could not imagine his fate as her friends told her police rescued him and he was let off later.
But he didn’t return. Next morning, a private guard at Kushal cinema found Mehboob in a pool of blood.
You must log in or register to reply here.
Share:
Facebook Twitter Pinterest WhatsApp Link
Top