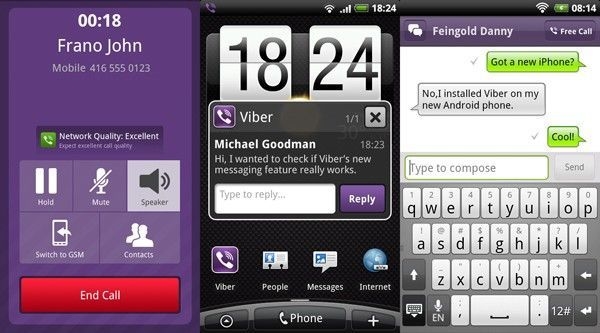 Free and no registration 3G VoIP calling is what Viber app does, but the application were only launched for iPhone last year and no Android version. Luckily Viber have just entered the Android Market as we speak, boasting most of the iOS features. It also added few extras such pop-up text message notification, in-app call logs, and the option to use Viber as your default dialer. Now sure this could be another blockbuster app, since who don’t like free calls? To prove this the company claims 12 million active users in just 7-months prior to launch. We got the press release and video after the break.

NEW YORK, July 20th, 2011 – Viber, the revolutionary mobile application that offers users free phone calls and text messaging to other Viber users over 3G and Wi-Fi, is announcing today the official launch of the Android version of the app, bringing Viber to millions of additional users. Viber is also announcing that it has acquired over 12 million active users (last 30 days) and has an impressive call traffic volume of over one billion minutes of calls per quarter.

“This is an incredibly exciting day for us,” said Talmon Marco, Viber CEO. “We have been looking forward to launching our Android app, especially after having received a staggering number of requests from Android users asking us to bring Viber to the Android market. Our latest user numbers are the best indicator of how much our users love to talk and send messages for free with Viber.”

The incredibly fast growth of Viber is even more remarkable considering that Viber was released for iPhone just seven months ago. Viber now has over 20 million registered users and 12 million active users who currently talk on Viber for 11 million minutes every day, with an average of 6 minutes per call.

“We’d like to take this opportunity to thank more than 50,000 users who have been testing the beta version of Viber for Android since May,” Marco said “The beta test allowed us to refine the app and prepare it for widespread release.”

The Android version of Viber features the same super-easy setup process and high- quality calls that drove its success on the iPhone. The Android version of Viber includes several exclusive features:
Full call screen whenever a Viber call is received;
Popup text message notification, which lets users respond to text messages without having to open Viber;
Tighter integration with the phone, which allows users to see their regular call logs and messages within Viber;
A default dialer setting that enables users to use the Viber dialer for all their phone calls, not just for Viber calls.
The release of Viber on Android is also good news for the millions of users of the iPhone version of the app. With Viber offering free calls and texts for both Android and iPhone devices, users can now enjoy using Viber with even more friends and contacts.
Watch this video to find out more about Viber for Android: ‪Viber for Android - Free calls and text messages‬‏ - YouTube

About Viber Media
Viber Media is revolutionizing personal communication by enabling users to make free Viber to Viber calls and text messages on their mobile phones. Having reached more than 20 million registered users within its first 7 months, Viber is the world’s fastest growing VoIP service.