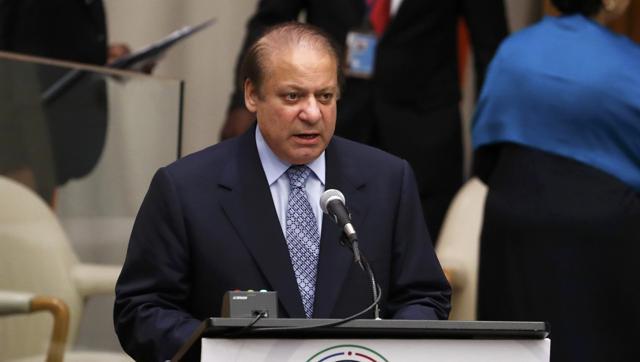 Pakistani Prime Minister Nawaz Sharif raised the situation in Kashmir in his first meetings upon his arrival in New York on Monday for the annual UN general assembly Monday, but found no traction, particularly with neither the US nor the UK endorsing his views.
On Monday, the Pakistani Foreign Office said that Sharif had sent letters to the US, Russia, China, Britain and France asking them to intervene “to halt more than two months of violence in Kashmir “ which he claims is a threat to international peace and security. The latest Pakistani diplomatic offensive came a day after the terror attac k suspected to have been carried out by Pak-based Jaish-e Mohammad in an army camp in Uri in Kashmir killed 18 Indian soldiers .
His attempts to get world leaders to back Pakistan’s stand on Kashmir met the same fate as his earlier letters to different members of the UN in recent months as he has tried to parlay the issue to secure his position at home.
Sharif railed about Kashmir in his meetings with British Prime Minister Theresa May and the US secretary of state John Kerry, according to reports in Pakistani press based on briefings or statements from officials in the Prime Minister’s delegations to which Indian reporters have no access.
There were no readouts about the meetings either from the UK or the US till late in the evening on Monday, in contrast to the multiple briefs they had put out about their respective leaders’ other interactions.

Sharif’s recent attempts to raise Kashmir at the UN — through letters to a range of entities — had elicited no response from the world body, as noted by Indian officials, who believe he is flogging it for political leverage at home against the other Sharif, Army Chief General Raheel Sharif.
The US had no comments on Kerry’s meeting with Sharif, saying there was a “backup of press releases”. But Pakistani press reports were indicative enough, if not proof beyond doubt, about what transpired at those meetings.
State-owned Radio Pakistan which has historically enjoyed first access to speeches and remarks from the country’s leaders, specially the Prime Minister and the President, said this about the meeting with Kerry:
“‘Highlighting Kashmir issue, he (Sharif) said so far one hundred and seven people have been martyred and hundreds injured during the current spree of violence in Occupied Kashmir.
“He said human rights violations are being carried out as state terrorism in the held valley.
“John Kerry appreciated Pakistan's endeavours in fight against terrorism and extremism.
“He said peace and stability in the region is in the interest of both Pakistan and Afghanistan.”
There was no mention, to belabour the obvious, to Kashmir or India in Kerry’s remarks as reported by Pakistani press.
Sharif’s meeting with British Prime Minister May didn’t go any better, according to same sources — the Pakistani media, Radio Pakistan ignored it completely despite the fact that it did have a few paragraphs on Sharif’s meeting with John Key, Prime Minister of New Zealand which has opposed India’s admission to the Nuclear Suppliers Group, an elite group of 48 nations which regulates world trade in nuclear resources and equipment.
But here is what The News, a reputable Pakistani news publication and website, said about Sharif’s meeting with May: “‘Unarmed civilians are being subjected to the most inhumane treatment in occupied Kashmir. We will not let the world run from the promises it made regarding Kashmir,’ Sharif reportedly said.
“He highlighted the atrocities being committed in Kashmir during his meeting with Theresa May and urged her to play her part in ending the crisis. Nawaz Sharif said that Pakistan will not leave Kashmiris alone in their time of need and also stated that if the global community failed in putting an end to human rights violations in occupied Kashmir, then it would serve as encouragement for India.
“Pakistan's stance regarding the Kashmir cause is clear and straightforward. UN's resolutions on Kashmir must be implemented as soon as possible,” he said.
And, how did May respond?
“‘The British Prime Minister acknowledged Pakistan's efforts in promoting economic stability and tackling terrorism. She also appreciated Pakistan's efforts in bringing about peace in Afghanistan,” said the News.
And, she talked about the role of Pakistanis in Britain, saying they are “playing an important role in the progress of Britain.”
Tellingly, there was not a word about India or Kashmir.
You must log in or register to reply here.
Similar threads