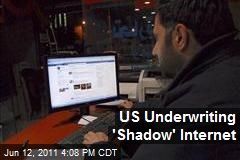 Australian newspapers published the articles covering the story of the US government planning to create a shadow Internet. The aim of the latter is supposed to be letting dissidents abroad to complain about their governments. It seems like this movement is a kind of some secret project, which purpose is to develop independent mobile phone networks in other countries.


Although it is unclear where Sydney Morning Herald has got this information, but the project described in their article covers an innovative concept called “Internet in a suitcase”. In short words, the project is aiming to make possible wireless communication within a wide area, linking to the global web. The newspapers also note that this concept was based on a mesh network, which works by converting different devices like mobiles or desktop computers to establish an invisible wireless Internet without any centralized hub.

The government of the United States has reportedly directed $2 million to so-called “liberation technology”. The technology in question involves stealth wireless networks, which are supported by the State Department. The wireless networks are supposed to serve for facilitating communication of activists in such countries as Libya, Iran, or Syria with outside parties. However, that wasn’t all. More than $50 million are reported to be put by the State Department and Pentagon into the development of an independent mobile phone network in Afghanistan. In order to realize this plan, Pentagon had to use towers on protected military bases all over the country under the official reason of trying to prevent Taliban from taking down the official services in Afghanistan.

While the government of the United States is expressing its great satisfaction with the partly fulfilled project, the industry observers note that it will be interesting for them to watch the reaction of the biggest pro-copyright outfits in the country. Although copyright holders always seem to agree with the US authorities, they may change their mind after realizing that this new web can work against them. The reason is simple – any Internet can quickly become a very convenient way for the copyright holders’ nightmare – illegal file-sharing.
You must log in or register to reply here.
Share:
Facebook Twitter Pinterest WhatsApp Share Link
Top