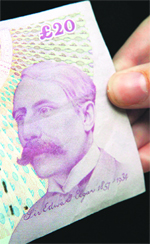 Indians who travel to Britain for sight-seeing, shopping or on business purpose, please note: from tomorrow, the £20 note featuring the image of composer Edward Elgar will be withdrawn


Every year, thousands of Indian tourists, students and business people travel to Britain.

The £20 note featuring Elgar has been replaced by a note of the same denomination but features 18th century economist Adam Smith.

The Bank of England said for several months after the end of June most banks, building societies and post offices will accept the Elgar £20 notes for deposit to customer accounts and for other customer transactions, but this will be at the discretion of the individual institution.

However, the apex bank said it will always exchange its old notes.

Indians are among the highest shoppers in London's West End, and a consortium of retailers recently launched a campaign with the Home Office to relax visa norms for Indian and Chinese shoppers before the Olympics.

The withdrawal of Elgar's £20 note has been criticised as a 'national disgrace' by the music industry. — PTI
You must log in or register to reply here.
Similar threads
The Karnataka Transport Dept Asks Uber And Ola To Withdraw Carpool Services From This Frid
Demonetisation: Big Bazaar to let customers withdraw money at its stores
Who said what on Modi govt’s surprise move to withdraw Rs 500, Rs 1000 notes
Withdraw notice or face action: Kangana’s lawyer to Hrithik
CRPF threatens to withdraw Badal’s security cover
Share:
Facebook Twitter Pinterest WhatsApp Link
Top