SHORTHAND NOTES OF THE STATEMENT MADE BY SHAHEED UDHAM SINGH

The Judge asked Udham Singh if he had anything to say as to why a sentence should not be passed upon him according to Law. Facing the Judge, he exclaimed:

"I say down with British Imperialism. You say India does not have peace. We have only slavery. Generations of so called civilization has brought us everything filthy and degenerating known to the human race. All you have to do is to read your own history. If you have any human decency in you you should die with shame. The brutality and bloodthirsty way in which the so called intellectuals, who call themselves rulers of civilization in the world are of bastard blood...


JUSTICE ATKINSON: I am not going to listen to a political speech. If you have anything relevant to say about this case say it.
UDHAM SINGH: I have to say this. I wanted to protest.

The accused brandished the sheaf of papers from which he had been reading.

THE JUDGE: Is it in English?
UDHAM SINGH: You can understand what I am reading now.
THE JUDGE: I will understand much more if you give it to me to read.
UDHAM SINGH: I want the Jury, I want the whole lot to hear it.
MR. G.B. MC CLURE (Prosecuting) reminded the Judge that under Section 6 of the Emergency Powers Act he could direct that Udham Singh's speech be not reported or that it could be heard in camera.
THE JUDGE (To the accussed): You may take it that nothing will be published of what you say. You must speak to the point. Now go on.
UDHAM SINGH: I am protesting. This is what I mean. I am quite innocent about that address. I never understood about that address. I am going to read this now.
THE JUDGE: Well, go on.

While the accused was perusing the papers, the Judge reminded him "; You are only to say why sentence should not be passed according to law".

UDHAM SINGH (shouting): "I do not care about sentence of death. It means nothing at all. I do not care about dying or anything. I do not worry about it at all. I am dying for a purpose". Thumping the rail of the dock, he exclaimed: "We are suffering from the British Empire!." Udham Singh continued more quietly:

"I am not afraid to die. I am proud to die, to have to free my native land and I hope that when I am gone, I hope that in my place will come thousands of my countrymen to drive you dirty dogs out, to free my country...

I am standing before an English jury. I am in an English court. You people go to India and when you come back you are given a price and put in the House of Commons. We come to England and we are sentenced to death. I never meant anything; but I will take it. I do not care anything about it, but when you dirty dogs come to India there comes a time when you will be cleaned out of India. All your British Imperialism will be smashed. Machine guns on the streets of India mow down thousands of poor women and children wherever your so called flag of democracy and Christianity flies. Your conduct, your conduct -

I am talking about the British government. I have nothing against the English people at all. I have more English friends living in England that I have in India. I have great sympathy with the workers of England. I am against the Imperialist government. Your people are suffering workers. Everyone are suffering through these dirty dogs; these mad beasts.

India is only slavery. Killing, mutilating and destroying - British Imperialism. People do not read about it in the papers. We know what is going on in India".

Thrusting his glasses back into his pocket, Udham Singh exclaimed three words in Hindustani and then shouted:


As he turned to leave the dock, the accused spat across the solicitors table. After Singh had left the dock the Judge turned to the press and said:

"I give direction to the Press not to report any of the statements made by the accussed in the dock. You understand, members of the press?" 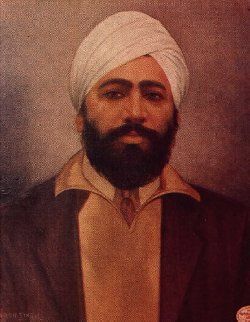 Udham Singh was a militant nationalist, was born Sher Singh on 26 December 1899, at Sunam, in the then princely state of Patiala. His father, Tahal Singh, was at that time working as a watchman on a railway crossing in the neighbouring village of Upall. Sher Singh lost his parents before he was seven years and was admitted along with his brother Mukta Singh to the Central Khalsa Orphanage at Amritsar on 24 October 1907. As both brothers were administered the Sikh initiatory rites at the Orphanage, they received new names, Sher Singh becoming Udham Singh and Mukta Singh Sadhu Singh. In 1917, Udham Singh's brother also died, leaving him alone in the world. 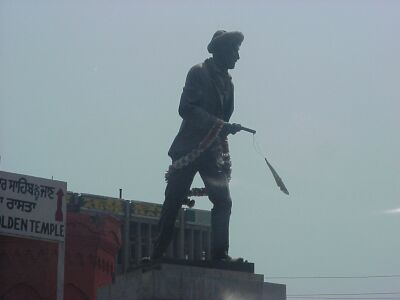 Udham Singh left the Orphanage after passing the matriculation examination in 1918. He was present in the Jallianvala Bag on the fateful Baisakhi day, 13 April 1919, when a peaceful assembly of people was fired upon by General Reginald Edward Harry Dyer, killing over one thousand people. The event which Udham Singh used to recall with anger and sorrow, turned him to the path of revolution. Soon after, he left India and went to the United States of America. He felt thrilled to learn about the militant activities of the Babar Akalis in the early 1920's, and returned home. He had secretly brought with him some revolvers and was arrested by the police in Amritsar, and sentenced to four years imprisonment under the Arms Act. On release in 1931, he returned to his native Sunam, but harassed by the local police, he once again returned to Amritsar and opened a shop as a signboard painter, assuming the name of Ram Muhammad Singh Azad. This name, which he was to use later in England, was adopted to emphasize the unity of all the religious communities in India in their struggle for political freedom.
Udham Singh was deeply influenced by the activities of Bhagat Singh and his revolutionary group. In 1935, when he was on a visit to Kashmlr, he was found carrying Bhagat Singh's portrait. He invariably referred to him as his guru. He loved to sing political songs, and was very fond of Ram Prasad Bismal, who was the leading poet of the revolutionaries. After staying for some months in Kashmlr, Udham Singh left India. He wandered about the continent for some time, and reached England by the mid-thirties. He was on the lookout for an opportunity to avenge the Jalliavala Bagh tragedy. The long-waited moment at last came on 13 March 1940. On that day, at 4.30 p.m. in the Caxton Hall, London, where a meeting of the East India Association was being held in conjunction with the Royal Central Asian Society, Udham Singh fired five to six shots from his pistol at Sir Michael O'Dwyer, who was governor of the Punjab when the Amritsar massacre had taken place. O'Dwyer was hit twice and fell to the ground dead and Lord Zetland, the Secretary of State for India, who was presiding over the meeting was injured. Udham Singh was overpowered with a smoking revolver. He in fact made no attempt to escape and continued saying that he had done his duty by his country.
On 1 April 1940, Udham Singh was formally charged with the murder of Sir Michael O'Dwyer. On 4 June 1940, he was committed to trial, at the Central Criminal Court, Old Bailey, before Justice Atkinson, who sentenced him to death. An appeal was filed on his behalf which was dismissed on 15 July 1940. On 31 July 1940, Udham Singh was hanged in Pentonville Prison in London.
Udham Singh was essentially a man of action and save his statement before the judge at his trial, there was no writing from his pen available to historians. Recently, letters written by him to Shiv Singh Jauhal during his days in prison after the shooting of Sir Michael O'Dwyer have been discovered and published. These letters show him as a man of great courage, with a sense of humour. He called himself a guest of His Majesty King George, and he looked upon death as a bride he was going to wed. By remaining cheerful to the last and going joyfully to the gallows, he followed the example of Bhagat Singh who had been his beau ideal. During the trial, Udham Singh had made a request that his ashes be sent back to his country, but this was not allowed. In 1975, however, the Government of India, at the instance of the Punjab Government, finally succeeded in bringing his ashes home. Lakhs of people gathered on the occasion to pay homage to his memory.

yeah, they were all great revolutionists -- bhagat singh, udham singha nd likes
but along with being revolutionists, they were also great thinkers, who foresaw what could be problems in free india.
bhagat sigh once said, that after india gets free, the biggest problem will be to keep it free from the corrupt crooks of our own country,
and everybody knows, this is the biggest menace today that sorta makes suffocating, the atmosphere we are living in