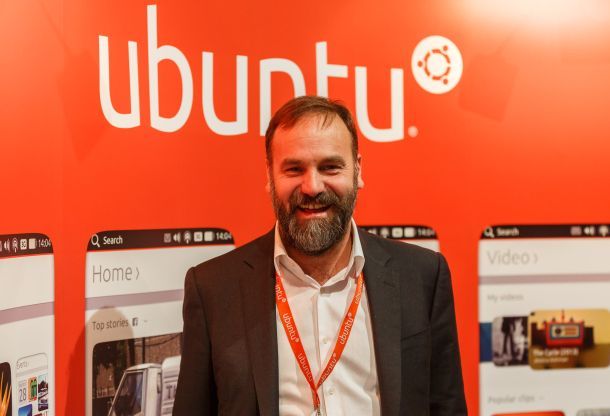 PARIS -- Ubuntu Touch has its first customer, CNET has learned.

Canonical has just signed its first deal to supply a smartphone with its mobile operating system, Canonical founder and product strategy leader Mark Shuttleworth revealed in an interview here at the LeWeb conference. He wouldn't say which company has agreed to use the Linux-based OS, but said it will be offered on high-end phones in 2014.

"We have concluded our first set of agreements to ship Ubuntu on mobile phones," Shuttleworth said. "We've shifted gears from 'making a concept' to 'it's going to ship.' That has a big impact on the team."

And, he said, Canonical is in board-level discussions with several others: "We are now pretty much at the board level on four household brands. They sell a lot of phones all over the world, in emerging and fully emerged markets, to businesses and consumers."

It's significant progress for a nine-year-old company that has specialized in the Ubuntu version of Linux. But it's a very long way to making even a small dent in the dominance of Google's Android and Apple's iOS.

Shuttleworth knows he's got big incumbent powers to reckon with, along with smaller mobile OS players such as Windows Phone from Microsoft, Tizen from Samsung and Intel, and Firefox OS from Mozilla and a host of carrier partners. He thinks Ubuntu Touch, with a flexible programming foundation beneath and an immersive services-first interface on top, will find a place, though.

Shuttleworth knows he's got big incumbent powers to reckon with, along with smaller mobile OS players such as Windows Phone from Microsoft, Tizen from Samsung and Intel, and Firefox OS from Mozilla and a host of carrier partners. He thinks Ubuntu Touch, with a flexible programming foundation beneath and an immersive services-first interface on top, will find a place, though.

"Volume is important. We want to do stuff that people use every day," he said. He doesn't want Ubuntu to occupy only a small niche of the mobile market.

So how will Ubuntu Touch make it to the big leagues? Partnerships with those who offer services -- partnerships with companies like LinkedIn, Baidu, Facebook, Evernote, and Pinterest is one way. Those with online services see Android as a vehicle to drive people to Google services, and they're looking to back an alternative that will give them top billing, Shuttleworth said.

Ubuntu Touch puts those services front and center in a rich way that elevates them beyond mere app icons.

"The look is fresh and clean. It's much more usable than any of the other new phones," Shuttleworth said.

A second part of the sales pitch is that Ubuntu Touch is open, something that appeals to some business partners. It's based on the open-source operating system also at the core of the Ubuntu product for personal computers and servers. And it can run apps written for that Linux kernel, for a Java layer on top that's not far removed from Android's app underpinnings, or Web apps that are the lifeblood for Firefox OS.

It's hard to imagine that Android developers will eagerly to produce a sister version of their apps, no matter how easy the developer tools make it, unless Ubuntu Touch spreads widely. Shuttleworth believes they will, though, since they already have to reckon with a fragmented Android device market and Ubuntu Touch isn't far removed.

"We make no claims for Android compatibility, but we make it super easy for you to target both at the same time and super cool for you to do so," Shuttleworth said.

Shuttleworth founded Canonical in 2004, back in the day when Linux on the desktop was, if not exactly a contender, at least a more widely discussed alternative to Windows PCs than it is today. Since then, the company expanded to the server market, with a major focus on cloud-computing infrastructure such as Amazon Web Services' EC2.

Mobile came next -- but so far profits have not followed for the company. Shuttleworth sold Thawte Consulting to Verisign in 1999 for $575 million and and has enough wealth for space tourism -- he became a cosmonaut on a Russian Soyuz trip in 2002. And he's been willing to subsidize Canonical while it grows a business.

If he wanted, the company could become profitable on its PC and server business right now by dropping the mobile work. But for now, it invests in its future because Shuttleworth thinks dumping mobile would cut the company off from a major part of computing.