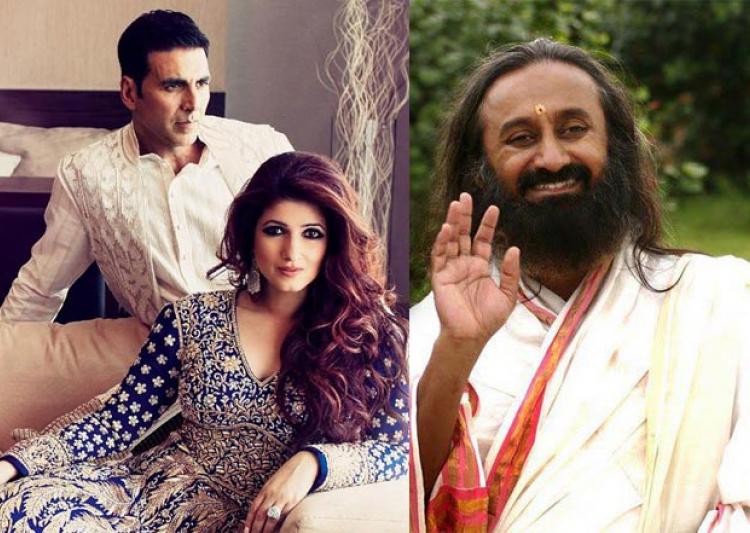 Actress Twinkle Khanna, who did not shine in her brief Bollywood career, is now someone who has a great fan following in the virtual zone. She is a hit Twitter user and her jokes have the capability to light up anyone’s day.

One of her jokes, though, might have started troubles for her hubby superstar Akshay Kumar. It all started when Mrs Funnybones, this is Twinkle’s handle, took a jibe at the Art Of Living Founder, Sri Sri Ravi Shankar. Twinkle, had written, “Sri Sri got his nobel foot and half his beard stuck in his mouth in a yogic pose the BabaRamdev perfected a while ago #HolyMenandHairyTales.”

AOL followers, immediately defended Sri Sri, and trolled Twinkle. Trolling her was okay, till matter went a little out of hand. Followers of Sri Sri, threatened to boycott, Twinkle’s husband’s upcoming next Housefull 3.

Later, Twinkle apologised for her tweet with, “Didn’t mean to hurt anyone’s feelings was meant to be a joke and am old enough to accept an error of judgement on my part.”

As a reply to this Hathi wrote, “Error of Judgement or Fear of #BoycottHousefull3. Anyway Being Old and Being wise is different thing.”

After this tweet, Twinkle did not fear anything anymore. She openly called out the bluff of Hathi and said that if he didn’t get her joke, he is free to slam her but speaking about boycotting Akshay’s film was a real low.

Here are the tweets exchanged between them:

Darshak Hathi ‎@DarshakHathi
@mrsfunnybones My tweet was in respond to your tweet which has hurt my sentiments. I appreciate that you have gracefully deleted it.
11:28 AM - 8 May 2016

Darshak Hathi ‎@DarshakHathi
@mrsfunnybones My tweet was in respond to your tweet which has hurt my sentiments. I appreciate that you have gracefully deleted it.

‎@mrsfunnybones
@DarshakHathi I have a snapshot of what you said after i apologised and deleted my joke 'Fear of Boycott Housefull3' is this art of living?
11:41 AM - 8 May 2016

Twitteratti, however, sided with Twinkle. They came in her support saying that she just cracked a joke and she should not have apologised. Many also said that the Art of Living, is after all the Art of Intimidation.

Suparn Verma ‎@Suparn
Disgusting mob behaviour by the art of living followers making @mrsfunnybones delete her joke on a man who deserves more such jokes
4:02 PM - 8 May 2016