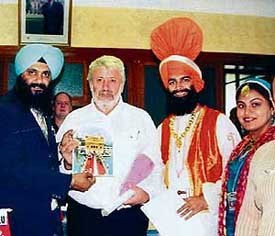 Varinder Singh
Tribune News Service​
Jalandhar, September 23
Though the French authorities have banned students from sporting religious symbols, including the turban, in French schools, the French people still accord full respect to turbaned Sikhs.
They are also “aware that Sikhs are an integral part of the world mainstream” and that their turbans are symbols of spirituality and a distinct identity of the Sikh community.
This was revealed by Mr Davinder Singh Chinna, Director of the Ludhiana-based Punjab Cultural Promotion Council (PCPC) and a member of the International Sport Cultural Association (ISCA), based at Copenhagen in Denmark.
Mr Chinna was part of a team from Punjab that participated in the 47th Festival International De Folklore De Montrejeau, in France last month. The team also toured a number of European countries, including Spain, to promote Punjab heritage and Sikh culture.
Mr Parminder Singh Nona, a choreographer, Mr Bhupinder Singh Vicky, Mr Ropan, Mr Vikramjit Singh, Ms Paramjit Kaur, Ms Amandeep Singh Saimbhi, Ms Pooja and Ms Navjot Kaur Sandhu, were the other members of the team. Mr Emil Dimitrov, Overseas coordinator of the PCPC (Europe Chapter), was also part of the team.
“Common French people, students and artistes showed full respect to the turbaned youth from Punjab. We believe that their response to the turban will convince the French authorities about the dignity of the turban and to realise that the French government decision on the turban needs to be reconsidered,”said Mr Chinna. He further added that ‘“Turle Walian Paggan stood out among nearly 500 participants from France, Turkey, Slovakia, Bulgaria, Brittany, Spain, Scotland, Israel, Itlay and other countries during the international folk parade, organised on the ocassion”.Claiming that he was awarded with a Diploma D’ Honneur by the French government for his role in international cooperation and efforts towards strengthening of international friendship and peace, he said: “I believe that common French people are intensely tolerant and my chats with them revealed that they had nothing against the turban.”

proud to be a sikh....
thanks for sharing