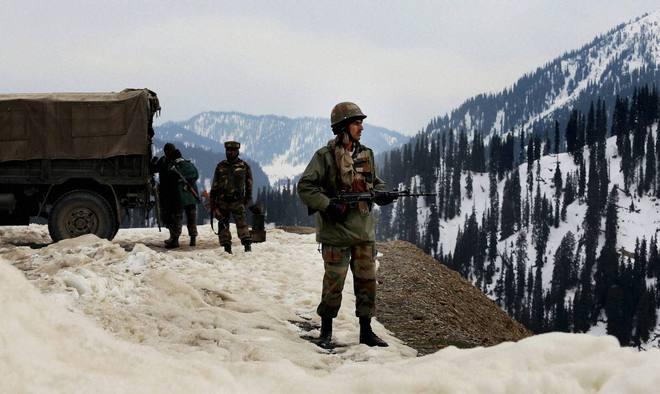 For the Sheikh family of Tangdhar in frontier Kupwara district, the death of Tanweer Ahmed Sheikh, 26, is the second tragedy in the past nine months.
Tanweer was killed on Wednesday when three heavily armed Jaish-e-Mohammad militants tried to storm an Army base close to the Line of Control (LoC) in Tangdhar. His younger brother Saddam (20) was killed after being buried in a snow avalanche in March this year.
Tanweer worked with a Military Engineering Service contractor in the same camp which was attacked by the three militants.
On Wednesday, when the news about his death spread, villagers thronged his home located close to the camp.
“The family is yet to overcome the shock of Saddam’s death. Now, the sudden and tragic death of Tanweer has shattered them,” said Irshad Ahmed, a relative of Tanweer. “We received Tanweer’s body around 4 pm on Wednesday and a large number of people of Tangdhar attended the funeral prayers held late Wednesday,” he added.
The family said Tanweer was working at the Army camp in night shifts for the past three years as a generator operator.
“He would always return home at 8 am, but on Wednesday, when we came to know that an encounter had broken out in the camp, we were worried. By 10 am, we had come to know that Tanweer had got wounded and later his death was confirmed by officials in the area,” said Tanweer’s another relative.
“Doctors told us that Tanweer had received three bullets and died due to blood loss,” he added.
Tanweer was married three years ago and is survived by his wife and one-and-a-half-year-old son. Tanweer’s father, Muneer Ali, who is posted at the Armed Wing of the police was in Srinagar when he received the news of his son’s death.
Tanweer’s younger brother Saddam was killed in an avalanche on March 2015 when he was on his way home from Kupwara.
“Two residents of Tangdhar, including Saddam, were killed near Sadhana Pass (Kupwara-Tangdhar road) when they came under a massive snow avalanche,” Irshad said.
You must log in or register to reply here.
Similar threads
PUBG Tragedy:16-Year-Old in Madhya Pradesh Dies After Playing Game For 6 Hours Straight
Wedding Ceremony Turns Into A Tragedy: Celebratory Firing Kills 1, Injures 3
Mahad tragedy: Navy divers find wreckage of bus near collapsed bridge
Flyover tragedy: Heart-wrenching scenes at Kolkata hospitals
Two-member body to probe helicopter tragedy
Share:
Facebook Twitter Pinterest WhatsApp Link
Top