- Government urged to hold public debate on the Prevention of Torture Bill, 2010 - 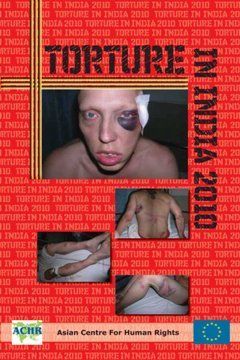 New Delhi: The Asian Centre for Human Rights today released its report, Torture in India 2010, at a press conference in New Delhi and stated that taking 2000 as the base year, custodial death have increased by 41.66% persons under the United Progressive Alliance (UPA) government between 2004-2005 to 2007-2008. This includes 70.72% increase of deaths in prison custody and 12.60% in police custody.
“It is the aam aadmi who are the majority victims of torture and other inhuman and degrading treatment. However, the UPA government has failed to do address the issue of torture and other human rights violations” – stated Mr Suhas Chakma, Director, Asian Centre for Human Rights
The Asian Centre for Human Rights welcome the fact that the UPA has taken a number of measures to address the economic rights of the aam aadmi including the Right to Information, the right to work (national Rural Employment Guarantee Act), the Domestic violence Act, the Commission for Protection of Child Rights Act, 2005 and the ‘Unorganised workers’ social security Act 2008, the right to elementary
education for the children and legislation for 50% reservation for women in local bodies the panchayats and recently proposed Food Security Bill.
The Asian Centre for Human Rights, however, expressed concerns that the UPA government has failed to address the need for an anti-torture legislation. Even when the Cabinet approved the decision to introduce the Prevention of Torture Bill, 2010 before the parliament and ratify the UN Convention Against Torture, the Bill is being treated as “state secret”.
“If government of India can hold public discussion on the Food Security Bill, why is it treating the Prevention of Torture Bill, 2010 as a secret document? It shows that the government has more to hide as its earlier draft, Prevention of Torture bill, 2008, contained only three operative paragraphs relating to (1) definition of torture, (2) punishment for torture, and (3) limitations for cognizance of offences. The Prevention of Torture bill, 2008 was highly flawed.” – stated Mr Chakma further.
In its responses before the parliament, the Ministry of Home Affairs repeatedly stated, “Police and 'Public Order' are state subjects under the Constitution of india. it is for the state Governments to take appropriate action in every crime.”
However, the Central government has failed to take action in the Union Territories that it governs directly. Further, in the decade 1999-2009, the Congress-national Congress Party ruled Maharashtra had the highest number of deaths (246 cases) in police custody followed by Uttar Pradesh (165 cases), Gujarat (139 cases), West Bengal (112 cases), Andhra Pradesh (99 cases), Tamil Nadu (93 cases), Assam (91 cases), Punjab (71 cases), Karnataka (69 cases), Madhya Pradesh (66 cases), Haryana (45 cases), Bihar (43 cases), Delhi (42 cases), Kerala (41 cases), Rajasthan (38 cases), Jharkhand (31 cases), Orissa (27 cases), Chhattisgarh (23 cases), Meghalaya (17 cases), Uttarakhand (16 cases), Arunachal Pradesh (15 cases), Tripura (9 cases), Goa (5 cases), Himachal Pradesh, Jammu & Kashmir and Chandigarh (4 cases each), Pondicherry (3 cases) and Mizoram, sikkim, Dadra & nagar Haveli, and Andaman & Nicober islands (1 each).
The Central government has refused to implement the law Commission of India's recommendations in its 152nd Report on ‘Custodial Crimes’ to amend the Indian Evidence Act, 1872 (insertion of section 114b) to provide that in cases of custodial death, the burden of proof lies with the police.
Among the torture cases in 2009, Asian Centre for Human Rights highlighted the torture of American journalists John Elliot who was subjected to torture by the Delhi Police on …. It was an issue where John Elliot was still lucky. Not Vinod Sharma who was killed the other day.
If a foreigner is subjected to torture in such a manner, what can happen to an aam aadmi in India? More than a year has passed, NHRC has not received. There is no remindeder.
Both the Central government and the state governments consistently refuse to provide sanction for prosecution as required under section 197 of the Criminal Procedure Code. In December 2009, the Bombay High Court asked the Maharashtra government to explain why it had rejected the state Criminal investigation Department (CID)’s plea to prosecute 10 officers of Mumbai Police in the Khwaja Yunus murder case. The state government had sanctioned the prosecution of four minor officers but let off 10 senior officials despite the CID establishing their roles in the custodial death of Yunus in January 2003.
It is clear that the Supreme Court’s guidelines in the case of D.K.Basu Vs State of West Bengal have failed to reduce the custodial deaths in India. The writ petitions pending before the Supreme Court of India seeking enforcement of the D K Basu Guidelines made little headway.
Torture is the most naked assault on human dignity. In India as elsewhere, it is the aam aadmi who suffers the most.
While the decision to introduce the Prevention of Torture bill, 2010 is welcome, unless Government of India takes lessons learnt from the failure of the supreme Court judgement (D K Basu judgement) and amendment of the Criminal Procedure Code and addresses the shortcomings, torture and custodial death will continue to rise.
The Asian Centre for Human Rights recommends to the Government of India to:
- Hold public discussion on the Prevention of Torture bill, 2010 with all stakeholders including the civil society groups and enact the same in 2010 itself;
- Implement the recommendations of the Law Commission of India to make consequential amendments to the Indian Evidence Act, 1872 (insertion of
section 114b) to provide that in case of custodial death the onus of proving of innocence is fixed on the police; and
- Repeal section 197 of the CrPC to uphold the supremacy of the judiciary.
You must log in or register to reply here.
Similar threads
Punjab News India ਵਲੋਂ Pakistan ਨੂੰ ਆਰਥਿਕ ਝਟਕਾ, ਬੰਦ ਕੀਤਾ Business
Punjab News India ਦੀਆਂ ਖੂਫੀਆ ਇੰਟੈਲੀਜੈਂਸ ਏਜੇਂਸੀਆਂ ਨੂੰ ਹੋਰ ਸਤਰਕ ਹੋਣ ਦੀ ਲੋੜ
Punjab News India 'ਚ ਚੱਲ ਰਹੀ Modi ਵਿਰੋਧੀ ਲਹਿਰ
Vehicle Modifications Are Now Illegal in India After This Supreme Court Order
Punjab News ਕੇਸ ਹਾਰਿਆ Vijay Mallya, ਹੁਣ ਲਿਆਂਦਾ ਜਾਵੇਗਾ India ?
Share:
Facebook Twitter Pinterest WhatsApp Link
Top